Americana from the William Reese Company 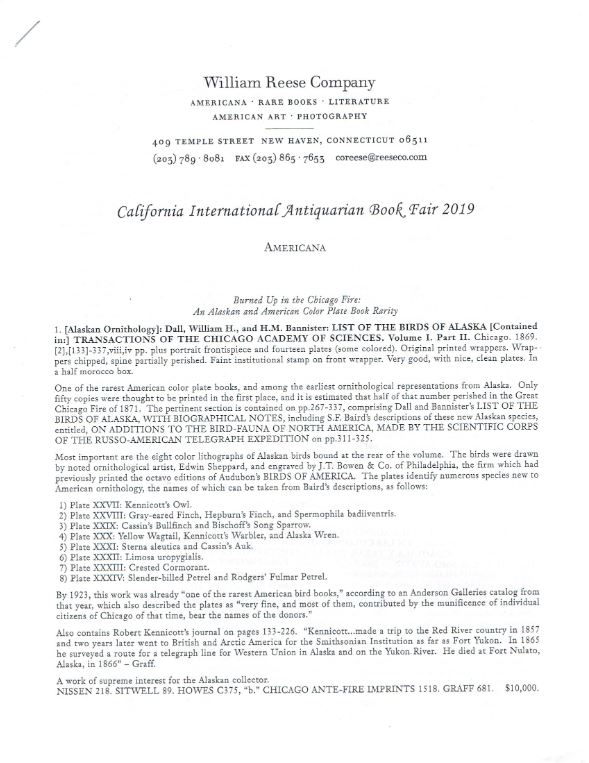 Americana from the William Reese Co.

This is not a typical William Reese Company catalogue, but a listing (with descriptions) of items under the title of Americana taken to the recent California International Antiquarian Book Fair. Reese has long been a major dealer in the field, so material they brought across the country for in-person viewing is going to be special. While there is a slight tilting towards books that would have particular appeal to Californians and residents of the Pacific coast, most items have no specific geographic focus, other than, of course, America. Here are a few samples.

We will start with a California item before moving on. Item 24 is Redwood and Lumbering in California Forests by Edgar Cherry, published in 1884. This book was prepared to promote the use of Redwood lumber. It describes the history and methods of redwood lumbering. Cherry noted that it was difficult to get good photographs of the redwoods because of the pervasive fog in the area. Nonetheless, he felt it was essential to use photographs rather than drawings. He feared no one would believe the size of the trees without photographic proof. He explains, "In as much as engravings are usually cut from sketches, drawn perhaps by enthused artists, perfect satisfaction is not given; but with photographic views, which cannot lie, argument as to truthfulness is unnecessary." This was, of course, from the days before Photoshop. Eastern audiences must have been amazed to see how tiny humans were next to these massive trees. There are 24 albumin print photographs mounted on thin cards showing groves of redwoods, logging, logging trains, felled timbers, and other scenes. Most have hand-stamped captions. No two copies appear to have the exact same photographs and placement order. Priced at $8,500.

Next we have a very rare book, a twist on the typical "Indian Captivity." That is the genre of book where a white person, sometimes a child, others an adult, is captured by Indians. If a child, the claim is usually of being raised as an Indian; if an adult, of being treated brutally. Many, if not most of these stories are imaginary or exaggerations, but the stories were popular among whites who wanted to believe they were civilized and the Indians were savages. Item 68 is The Lost Child; or, the Child Claimed by Two Mothers: A Narrative of the Loss and Discovery of Casper A. Partridge Among the Menomonee Indians... by F. B. Plimpton, published in 1852. Casper Partridge was three years old when he disappeared from the Wisconsin farm of the Partridge family (sorry about that one). Despite all of the searches, Casper could not be found. His father became suspicious of local Menomonee Indians, and had people checking on them. A couple of years later, they discovered a child they thought was Casper. They took him from his mother, Nah-kom. Nah-kom went to court, and ultimately the court, surprisingly enough, ruled the child was hers. This did not go over well with white settlers or the Partridges. Rather than return the abducted child, the Partridges spirited him off to Ohio, giving new meaning to the term "Indian Captivity." This book was written with the help of the Partridges and, though supposedly presenting the story and trial as an objective history, it was designed to support the Partridges' position. I have not been able to find the ending to this story. There is a history online that says a few years later, a young child's skeleton was discovered in the area, which changed the townspeople's belief about the child's identity. Even if so, I have not been able to find out what happened to him after being taken to Ohio. $2,250

Here is another book unlike most others of its genre. The title is Viaggio del Mare Atlantico al Pacifico per la Via del Nord-Ouest fatto del Capitano Lorenzo Ferrer Maldonado l'Anno 1588, which translates to voyage from the Atlantic to the Pacific by way of the North-West made by Captain Lorenzo Ferrer Maldonado in the year 1588. That is surprising, as three centuries later, explorers were still trying to find a Northwest passage from the Atlantic to the Pacific, something they had been attempting and writing about for centuries. Here is the story behind Maldonado's exploits. He wrote his account sometime around the date of the journey, but it was never published. That is not surprising as the Spaniards guarded their discoveries jealously, not wanting others to exploit or steal them. So, his account remained hidden until early in the 19th century, when it was found in a Milan library and published by Charles Amoretti. Maldonado speaks of sailing through a strait dividing the seas called the Strait of Anian, now known as Bering's Strait. While Amoretti was a believer, later scholars are convinced it was a fake. Many things Maldonado reported were proven later to be false. He speaks of forests and fruits along the way, which we now know do not exist in the Arctic. His latitudes and longitudes also do not make sense. It was a great story, but the account is fiction. Item 33 is a second (and "best") edition published in 1811. $9,500.

Maldonado may never have sailed into the Arctic, but Donald Baxter MacMillan did. Here are the photographs that prove this claim. Item 3 is a photograph album from MacMillan's three voyages to the Arctic from 1921-1925. Actually, he made many more, at least 30, but this covers three in particular. His start came when Robert Peary made his trip in 1909, said to have resulted in the first reaching of the North Pole (some dispute Peary's claim). Peary invited MacMillan to join his attempt to reach the Pole. MacMillan did not make it all the way as he was forced back by frozen heels. While that would have kept me from ever returning, MacMillan went back many times, and conducted many pioneering experiments concerning such things as radios and electricity in the Arctic. This album contains 83 photographs from missions that went to Baffin Island, Elsmere Island, and Greenland, depicting many scenes from the journeys, including landscape, wildlife, men working, dog sledding, hiking, native Eskimos, and ruins from early Norse explorers. $15,000

This is the story of the Benders, a "family" that ran a small stopping place along a rural road in Kansas, where you could stop for a meal or even stay for a night. This was no ordinary resting place; it was the real-life Bates Motel. The Benders consisted of Ma and Pa, along with Kate and John. It was never clear whether Kate and John were husband and wife, or brother and sister. Most likely, it was neither, nor were Ma and Pa husband and wife. The only likely relationship was Ma and Kate. They came to Kansas in 1870, and people figured they were German immigrants based on their accents. They were quiet people except for Kate, who was loquacious and charming. Guests would sit down at a table for dinner. Behind them was a curtain, from which Pa and John would emerge with hammers and beat their skulls in. The Benders would take their money and possessions and bury the bodies out back. Finally, when the brother of one of the victims started snooping around too much in 1873, the Benders figured their time was up and they took off. Ma and Pa took a train north, Kate and John a train south. They were never heard from again. However, the bodies, or parts thereof, of 10-14 people were dug up from the backyard. Item 51 is The Benders of Kansas, by John T. James, published in 1913. He was the defense attorney for the supposed Bender women in 1889. Two women were found in Detroit by a relative of one of the victims who claimed they admitted to being the Bender women. They were taken to Kansas for trial, but the court was unable to identify them as being the Bender women. Item 51. $3,500.