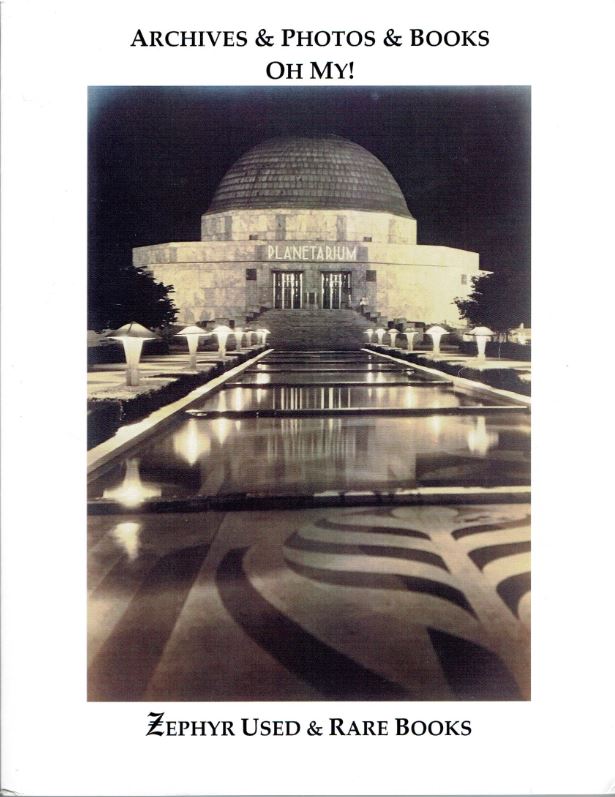 Zephyr Used & Rare Books has issued a catalogue of Archives & Photos & Books, Oh My! Oh My indeed. This is a collection of (slightly) over 200 items, uncommon, unusual and quite varied. There are lots of advertising flyers, some children's and other books, business and personal photos, complicated early computer books I cannot understand, product catalogues, and a copy of Sun Warmed Nudes. You might want to order that one quickly as it won't last. Here are a few other things to be found.

We begin with a large archive of photographs, primarily from Alaska, from the early 20th century. Henry A. Keil was from Catskill, New York, and there are a few photos of his home and family, but in 1907, at the age of 17, Keil took off for Alaska to be a prospector. We don't know how successful he was, but it is safe to say he did not become rich. He returned home in 1910 and spent the next four years studying to be an engineer at RPI (Rensselaer Polytechnic Institute). On graduating, he returned to Alaska, becoming a surveyor for the Government Land Office, and then a civil engineer. His album contains 504 photographs, a few also from Seattle, documenting places he visited. His annotated photographs show miners, Alaskan natives, and numerous other scenes, running through 1921, by which time he was working in Seattle. Keil lived until 1964. Item 6. Priced at $3,500.

This is a specialty catalogue that most people will never need. It comes from K. E. Karlson & Co. of Portland, Oregon, in 1932 and it offers a selection of artificial limbs. If you needed a leg, starting either above or below the knee, or an arm either above or below the elbow, Karlson had one (or two) for you. They also offered the Dorrance Utility Hook, which had multiple prongs to hold things, rather than the simple hook worn by Captain Hook. The firm also offered various orthopedic appliances, braces, neck collars, and extension shoes. Item 150. $295.

Next is a specially prepared souvenir photograph album from the Century of Progress Exhibition, also known as the 1933-34 Chicago's World Fair. In the midst of the Great Depression, it was a promise of a better future, one where scientific and technological advances would lead to a better life for all. The cover photo on this catalogue is one of these photographs, taken of the planetarium and reflecting pools at night. It was created by the fair's official photographers, Charles Kaufmann and Herman Fabry, and apparently were given only to certain officials of the fair. This one belonged to Chicago attorney Orville J. Taylor, who was a Century of Progress Trustee. There are 51 8 x 11 photographs covering various exhibitions and structures at the fair. Originally set to run just in 1933 to celebrate Chicago's centennial, it was such a success that it was reopened in the spring of 1934 for a second run. Item 54. $3,500.

Here is a promotional brochure for a place that wouldn't have been that much fun to visit in the days before air conditioning, at least not in the summer. Published in 1930, it promotes visiting Death Valley. It features photographs by Stephen H. Willard and spectacular cover art by Gerald Cassidy depicting the valley in brilliant shades of red. The promotional was put out by the Death Valley Hotel, which was a subsidiary of the Pacific Coast Borax Company. That oddity is explained by the company wishing to make use of its land when mining for borax in the area was no longer feasible. It also describes a visit to the historic Amargosa Hotel. Pacific Coast Borax created the 20 Mule Team Borax brand, which for years sponsored the radio, then television series Death Valley Days. Its spokesman was Ronald Reagan, long before he became President. Item 47. $95.

This book is one particularly for the women, a most useful guide entitled Decorum: A Practical Treatise on Etiquette and Dress of the Best American Society. It was published during the Victorian Era, in 1882, when standards for good manners were somewhat stricter than they are today. It says that women should not kiss women in public as it shows a touch of vulgarity. Women should be as self-reliant as possible and, particularly young women, should rarely accept assistance from strangers. That part is still good advice today. Here is one I find baffling - a woman should not take the arms of two different men, one on each side, nor should a man go arm-in-arm with two women on each side because these are "iniquities practiced only in Ireland, or Kamtschatka." Okay, I might expect such iniquitous behavior as walking arm-in-arm with two people of the opposite sex from such a crazy bunch as the Irish, but the poor Kamchatkins? Maybe they walk arm-in-arm to keep each other warm. Item 104. $150.

There aren't too many of us left now who remember silent movies when they were new. Still, those were legendary times, two decades in which movies were born. Item 62 is an archive of photographs from the silent film era. It contains 86 publicity photographs for 59 silent films and a few early talkies. They were compiled for showings at the Union Theater, later Egyptian Theater on Union Street in Portland, Oregon. For many, these pictures are the best you can do as 23 of these films are now considered "lost." The dates range from the roaring 20s to the early days of the Depression. Among the actors and actresses were many whose names are still familiar today - Clara Bow, Douglas Fairbanks, Jr., Loretta Young, Antonio Moreno, John Wayne, Florence Vidor, Jackie Coogan, and Lon Chaney. The Egyptian Theater opened in 1924 featuring an Egyptian motif of pyramids, pillars, and such. It seated 866 on the main floor and 344 in the balcony. It closed in 1963. $1,250.