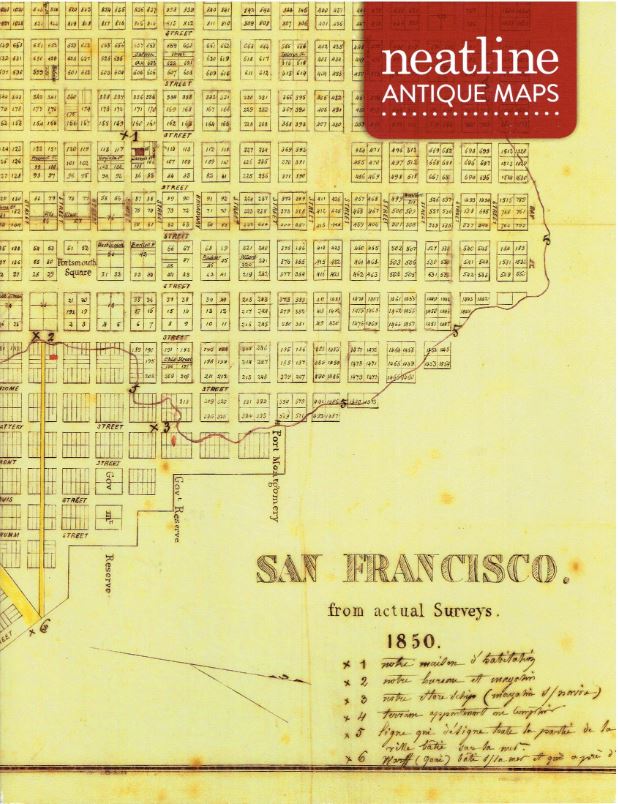 Neatline Antique Maps has created a one-item catalogue, San Francisco. from actual Surveys. 1850. That also is the title of the map, and it is a depiction of a rapidly developing city thanks to the California Gold Rush of 1849. Neatline notes that "it is often said that the gold diggers didn't get rich, but the shovel salesmen did." San Francisco of 1850 was a city burgeoning with shovel salesmen, and merchants and traders of all the other goods and services these miners needed. In 1848, San Francisco was a town of 1,000. Two years later, it was a city of 25,000.

This is a detailed, hand drawn map of the city in 1850. Its source is a map of the same name published by Miller Lith of New York. It appears to be as rare as this hand-drawn copy, that is, only one copy is known, held by the Bancroft Library at the University of California.

The map's legend provides some implications of who was its unknown mapmaker and who possessed it. It is written in French. That may sound surprising for San Francisco, but at the time, merchants were arriving from all over the world to get a piece of the action. There were many French merchants and three thousand French immigrants. The city even had a French Quarter (still does). The English title likely just reflects the source, not the language of its creator.

An interesting feature is a line that shows the city's original shoreline. San Francisco grew so fast that it was quickly running out of space. The solution was to fill in its muddy tidal flats to create more space on which to build.

The map even locates one of the city's store ships. Numerous vessels were abandoned after reaching San Francisco, and enterprising businessmen settled them in the mud and used them as warehouses or for other purposes. It helped the city grow rapidly, although almost all 148 of these were broken up by 1857. This map shows the location of one, and based on that, Neatline did some interesting research. Using contemporary writings, they determined it to be the Arkansas. This ship arrived from New York on December 20, 1849, and went aground on Alcatraz Island. She was pulled onshore, turned into a warehouse, and later a bar and hotel known locally as the "Old Ship." Amazingly, while the ship was buried, the bar continues today as the Old Ship Saloon (the sign notes it was established in 1851). The Arkansas is buried beneath it.

Now, as to who the anonymous mapmaker may be, Neatline has some ideas. The legend shows the location of the business that created the map, even if it doesn't name it. A city directory from the time places a couple of firms by the location, Ferdinand Vassault, Simmons, Hutchinson & Co., and J. J. Chaviteau, Selim, and Edward Franklin. Each has a French name, and while Vassault is a possibility, Neatline believes the map more pinpoints Chaviteau as the creator. They believe either J. J. Chaviteau himself or someone else in the firm created the map.