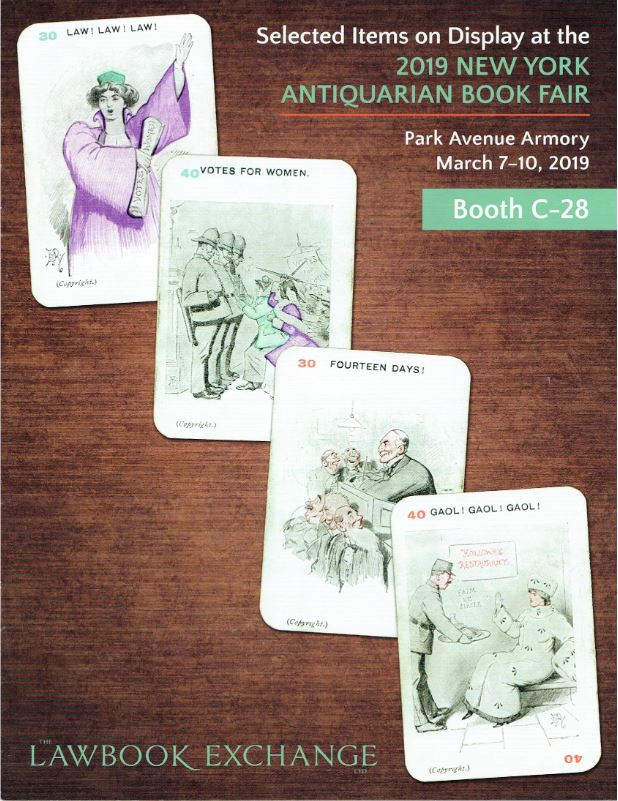 Items from the fair.

The Lawbook Exchange recently created a catalogue of Selected Items on Display at the 2019 New York Antiquarian Book Fair. The items are no longer on display as the fair has passed, but the material is as good as ever. Most attendees at a book fair, it is safe to say, are not lawyers, so this selection has fewer technical legal tracts than most Lawbook Exchange catalogues. This one includes some works notable for their age, others more accessible legal works, and some salacious material anyone can enjoy. There was no television to bring us up to date on the latest scandals in those days, but there were broadsheets and such with the latest news. Here are a few samples from these 100 items.

We begin with an item that looks really stupid in hindsight: Louisiana, Or the Bubble Upon the Constitutional Anvil, Fifteen Millions for the Purchase. No. V. This is a broadsheet newspaper from the United States Chronicle dated October 6, 1803. The number 5 implies there were earlier such articles though we have not been able to find any. There are a few other articles within this Federalist leaning paper. This article, highly critical of the Louisiana Purchase, is something of a case of sour grapes as President Jefferson had signed the purchase several months earlier, with all but the actual transfer of the land already completed. So for nothing, this newspaper made a complete fool of itself for history. The Louisiana Purchase must be the greatest land deal ever made. The U. S. purchased enough land overnight to double its size, containing all or parts of 15 current states ranging all the way from Louisiana in the southeast to Montana in the northwest, 530 million acres for $15 million, or 3 cents an acre. Item 53. Priced at $500.

Next is an engraving by Georg Keller, dated 1606, captioned Rechtfertigung der Vornehmsten Verrather In Engellandt. Keller was a German artist and engraver, and his subject is the execution of Guy Fawkes and others in 1605 for the Gunpowder Plot. The plotters were English Catholics unhappy with their treatment by King James I. Their plan was to blow up the House of Lords, which they hoped would lead to an uprising and the overthrow of James. They had 36 barrels of gunpowder hidden beneath the House of Lords when authorities received a tip. They discovered Guy Fawkes, the explosives expert, guarding the gunpowder. He and other plotters were captured, convicted, sentenced to death, and gruesomely drawn and quartered as well as hanged (except for Fawkes who fell off the scaffold and broke his neck). Ever since, Guy Fawkes Day has been celebrated in England to mark the foiling of the Gunpowder Plot. The picture displays various of the prisoner being drawn toward the scaffold as a crowd watches on. Item 28. $1,500.

No one is going to accuse James Gilbert Jenkins of being too nice a guy. The reason can be seen in the title of this book: Life and Confessions of James Gilbert Jenkins: The Murderer of Eighteen Men. Containing an Account of the Murder of Eight White Men and Ten Indians; Together with the Particulars of Highway Robberies, the Stealing of Several Horses, And Numerous Other Crimes as Narrated by Himself to Col. C.H. Allen, Sheriff of Napa County, While in Jail Under Sentence of Death for the Murder of Patrick O'Brien, published in 1864, the year Jenkins passed on. Jenkins was born in North Carolina, working his way across the country, evidently killing lots of people as he went, before picking up some jobs around Napa City, California. His last such job was being a helping hand for Patrick O'Brien. It was there that Jenkins got too personally involved and as a result became careless. I'm not sure with whom he became involved. One story you can find online is that he was involved with O'Brien's wife, who encouraged him to do away with her husband. The other is that Jenkins wanted to marry O'Brien's 14-year-old daughter but Patrick would not allow it. Whichever, it appears that Jenkins needed little impetus to murder someone, so O'Brien became victim #18. While awaiting his execution, Jenkins told his story to Sheriff Allen, and his only remorse was for being careless and getting caught. Item 68. $500.

Here is a title that leaves little to the imagination. It is also extremely rude: The Trial of the Hon. Mrs. Catherine Newton, Wife of John Newton, Esq. and Daughter of the Right Honourable and Reverend Lord Francis Seymour; At the Consistory Court of Doctors Commons; Upon A Libel and Allegations, Charging Her with the Crime of Adultery with Mr. Isham Baggs, A Young Oxonian; Mr. Brett, A Player at Bath; Thomas Cope, Mrs. Newton's Coachman; Isaac Hatheway, Her Footman; John Ackland, Of Fairfield...And Divers Other Persons. With All the Interesting Scenes Fully, Minutely, And Circumstantially Displayed, published in 1782. I like the way they begin by calling her the "honorable" Mrs. Newton before launching into all of that. The frontispiece shows Mrs. Newton about to go bathing in a river "assisted by Mr. Baggs" who is holding her bare leg. This is a first edition, with two more being published the same year. It must have been quite popular, implying there were a lot of dedicated legal scholars in old England. The verdict in the trial was that John Newton should be divorced from his wife. As a follow-up, they did get divorced that year, and the following year, Catherine married one Jacob Constant. Hopefully, they lived happily ever after. Item 86. $2,500.

If this is an insufficient amount of adultery, here is another title that says it all: Trials for Adultery: Or, the History of Divorces. Being Select Trials at Doctors Commons, for Adultery, Fornication, Cruelty, Impotence, &c. From the Year 1760, to the Present Time. Including the whole of the Evidence on Each Cause. Together With the Letters, &c. That Have Been Intercepted Between the Amorous Parties. The Whole Forming a Complete History of the Private Life, Intrigues, and Amours of Many Characters in the Most Elevated Sphere: Every Scene and Transaction, However Ridiculous, Whimsical, or Extraordinary, Being Fairly Represented, as Becomes a Faithful Historian, Who is Fully Determined Not to Sacrifice Truth at the Shrine of Guilt and Folly. The "present time" in this case was 1760, so all of this happened in just 20 years. Nevertheless, it took seven volumes to present it all. This gem is attributed to "A Civilian," the "faithful historian" who took down notes at these trials. Item 88. $7,500.