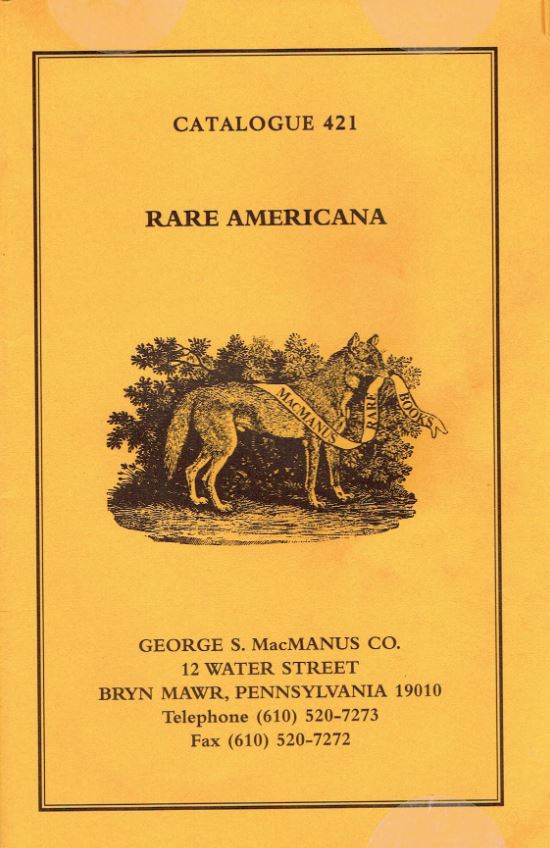 The George S. MacManus Co. has issued their Catalogue 421 of Rare Americana. There are 200 items and these are highly collectible. They are primarily quite old, ranging from early colonial times through the 19th century. There is even an occasional item that is a bit of a stretch to call it "Americana," but those are the small exceptions. This is a fine selection of material that is mostly hard to find. Here are a few of these selections.

We begin with one of the earliest looks at the vast interior of the southern portion of North America written in English: A Description of the English Province of Carolana, by the Spaniards Call'd Florida, and by the French, La Louisiane... With a large and Curious Preface, Demonstrating the Right of the English to that Country, and the Unjust Manner of the French Usurping of It. The author was Daniel Coxe, with this fourth issue of the first edition published in 1741. "Carolana" was the English name for a vast territory adjacent to Carolina, extending over much of Georgia, Florida, and the then great territory of Louisiana, even crossing to the other side of the Mississippi River. The name was taken to honor English King Charles I. Of course, the French did not take kindly to the English claims and did not cede its title to the land until after the French and Indian War. Coxe had a motive other than claiming the land for his country. He believed that he owned it all. His claim was based on an early grant from Charles I to a vast amount of wilderness which his father had purchased. Notwithstanding his personal interests, Coxe provides an early description of the land, his map was the most accurate for its time, removing the imaginary mountains once thought to parallel the Mississippi River, and Coxe provided the first published proposal for a confederation of the British colonies in North America. However, he never got the land. Item 138. Priced at $8,500.

This book also looks at this territory, a bit later, and specifically at its natives: History of the American Indians, Particularly those Nations adjoining to the Missisippi [sic], East and West Florida, Georgia, South and North Carolina and Virginia... published in 1775. The author was James Adair, an Irishman who came to this wilderness to trade with the natives. He says he stayed for 40 years, from 1735-1775, though he may have left earlier. Adair spent a great deal of time with the Catawba, Cherokee, and Chickasaw, enabling him to provide what is considered the best 18th century description of the southern Indians. The part of Adair's account that is not so accurate is his theory as to the origins of the native tribes. He believed they descended from the Lost Tribes of Israel, offering numerous arguments in favor of his belief, and discovering many similarities between the Indians and the Jews. If this seems far-fetched, this belief was held by many through the 19th century, particularly in the earlier times when the earth was believed to be only a few thousand year old. Where else could they have come from? Item 1. $4,000.

Here is another man who held this opinion. Elias Boudinot was an American patriot during the Revolution who served in numerous government positions in New Jersey and later in the U.S., including being a Congressman from his state in the first Congress. He was a well-respected, deeply religious man, and his "discovery" of the origin of America's natives as a Lost Tribe of Israel must have pleased him immensely. He was troubled by their mistreatment by so-called "civilized" nations, who stole their land and treated them as savages. However, actually being Israelites gave them the dignity of being biblical peoples. Rather than exploit them, Boudinot wished to Christianize them, with nothing but the best of intentions. Item 57 is his book, A Star in the West; or, A Humble Attempt to Discover the Long Lost Tribes of Israel, Preparatory to Their Return to Their Beloved City, Jerusalem, published in 1816. I'm not sure how the Native Americans would have reacted to being "returned" to Jerusalem. Confused?- Item 57. $500.

This is another book about America's natives, but it has nothing to do with Lost Tribes or Jerusalem. It is about a legendary leader who tried to preserve his people's land from settlers' intrusions, naturally, without success. No one succeeded. The title is The Life and Adventures of Black Hawk: With Sketches of Keokuk, the Sac and Fox Indians, and the Late Black Hawk War, by Benjamin Drake. It was published in 1838, while Black Hawk was still living, though he died later that year. Black Hawk was from the Sac or Sauk tribe and he was not a chief, but a leader of warriors. They lived in the Upper Mississippi Valley and had seen their territory pushed farther and farther west. Whites had pushed his tribe to the west side of the Mississippi, but Black Hawk was unwilling to cede his birthplace on the east side. Several times he led parties across the river, but did not engage the whites. He did so again in 1832, but some warriors and members of other tribes cooperating with Black Hawk engaged in hostilities. What ensued was a group of uncoordinated skirmishes which led to various atrocities on both sides. Soon enough, the military power of the United States overwhelmed Black Hawk and his compatriots, he surrendered, was taken to Washington to meet President Jackson (to appreciate just how powerful American forces were), and returned to his home on the west side of the river, which continued to be pushed back. But, Black Hawk fought no more, conceding to reality. His stand is known as the Black Hawk War, and it was the last Indian war east of the Mississippi. Drake understood what was being done to America's natives, the mistreatment and taking of land, and he is sympathetic to them and to Black Hawk, not common for his day. Item 176. $1,750.

Here is one that is only slightly Americana, but it's close enough. The title is Terra Australis Cognita: or, Voyages to the Terra Australis, or Southern Hemisphere, During the Sixteenth, Seventeenth, and Eighteenth Centuries. This is primarily an Australian and Pacific collection of voyages, recounted by author James Callander for a particular purpose. It consists of accounts of 41 Pacific voyages pre-Cook. Cook does not make the cut because the book was published in three volumes from 1766-1768, just before Cook left on his first trip. Many of the accounts were taken from a French work and some were herein published for the first time in English. Among those whose voyages are covered are Drake, Quiros, Vespucci, Cavendish, Dampier, Tasman, and Magellan. Some of these did pass by way of the Americas, so it does qualify for Americana. However, Callander's primary purpose in compiling these accounts was to convince the British to settle Australia. The Spanish and Dutch had made some earlier claims but ignored them, while Callender was particularly concerned about France taking the land ahead of England. Along with settlement, Callender suggests using Australia as a penal colony. Interestingly, at the time, the one part of Australia that had not yet been surveyed was the east coast, where the great majority of settlement would take place. This would have to await Cook's voyages. Item 82. $16,500.