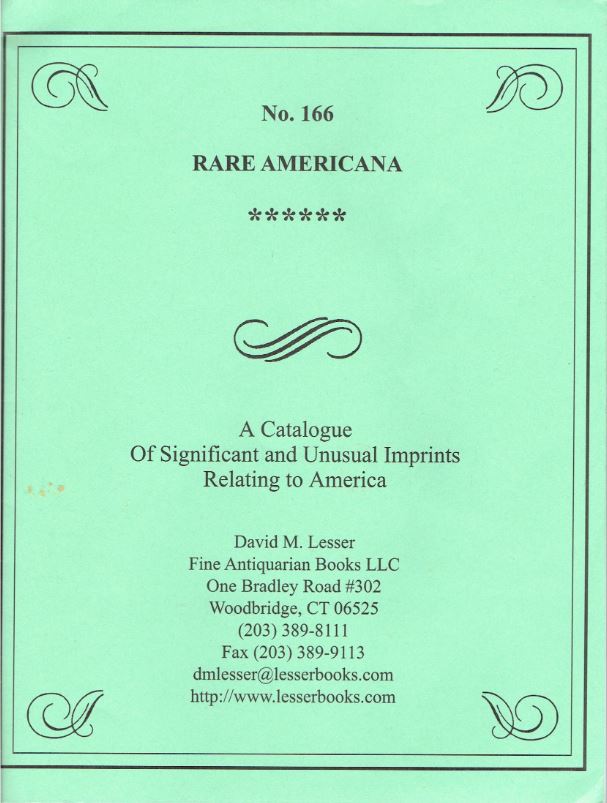 David M. Lesser Fine Antiquarian Books has published their Catalogue 166 of Significant and Unusual Imprints Relating to America. It is overwhelmingly filled with material from the 18th and 19th century. All kinds of works on paper are offered, though few of full book length. It is more in the form of pamphlets, broadsides, and manuscripts of various sorts. Maybe politics and religion don't mix (or shouldn't), but in a Lesser catalogue they do. They are two of the most common subjects, although crime, railroads, almanacs, slavery, revolution and rebellion are also well represented. Here are a few items from this latest Lesser collection.

We will begin with a sermon, but before you say "boring," it needs be pointed out that this one came under most unusual, and unpleasant, circumstances. Indeed, Pastor William Buell Sprague begins his sermon by saying, "never did we meet, in circumstances so appalling, as those which mark the present occasion." The title explains why: Wicked Men Ensnared by Themselves: A Sermon Preached, December 16, 1825, in the Second Parish of West Springfield, At the Interment of Samuel Leonard, and Mrs. Harriet Leonard, His Wife; The Former of Whom Murdered the Latter, And then Committed Suicide, published in 1826. At the end, an appendix recounts the details of the horrible event. By all accounts, Samuel was an unhappy man, who spread his misery to others. He was said to treat his wife cruelly, his children severely. At times he could be threatening, though it is not clear he ever resorted to physical harm until the fateful day. With Harriet turned the other way while washing clothes, he took an ax and struck her on the head, and once more after she fell to the floor. He then pulled a razor from his pocket and slit his own throat. All the while, their 11-year-old daughter looked on. Sprague, a Presbyterian, was willing to put part of the blame on Samuel's more liberal, Universalist religious views. Sprague interprets its doctrine that salvation is open to all as implying that your behavior doesn't matter, so might as well chop your wife's head off if you like. Item 112. Priced at $450.

Before moving on, we will have one more sermon from a pastor, this one given in writing, not vocally. The reason for this method of presentation will also be clear from the title: Mr. Hobby's Advice to His People from the Grave. William Hobby was the Pastor of the First Church of Reading, Massachusetts, when he died in 1765. As he tactfully points out in the opening, "Before these lines reach you, the hand that writes them will be mouldering in the dust." Rev. Hobby's advice pertains to the selection of a new pastor. He warns that Satan will try to take advantage of the death of their pastor to lead the flock astray, so he cautions against being led down the wrong path. He then turns to the selection of a new pastor, to which he provides advice on what to look for, which essentially comes down to religious interpretations consistent with his own. Rev. Hobby then does one very nice thing for his successor. He advises they treat their new pastor dearly. "If he sows to you in spiritual things, do not think it much if he reap of your carnal things. A rich ministry, I readily grant, has always been the bane of religion; but let me assure you, that an impoverished ministry always will be so." In other words, take good care of him and pay him well (perhaps Mr. Hobby though he was underpaid?). I will assume here that Rev. Hobby was speaking of worldly things when he used the word "carnal," not more base instincts. He then closes his final words with, "This is the last farewell of your once affectionate Pastor, William Hobby, Now no more!" Item 57. $500.

Next is a rare and important broadside from the earliest days of the American Revolution. It was printed in Boston by John Howe and its heading just says BOSTON, 26th of June, 1775. It is an account of the Battle of Bunker Hill (and Breed's Hill) on June 17th. Having been routed at Lexington and Concord, the British attacked the patriots' position on the hill overlooking Boston. The broadside states that the "Rebels" were forced from their positions, leaving five canons behind. It then proclaims, "This action has shown the Bravery of the King's Troops, who under every Disadvantage, gained a compleat Victory over Three Times their Number, strongly posted, and covered by Breastworks. But they fought for their KING, their LAWS, and CONSTITUTION." This was all technically correct. The British "won" the battle, but their losses were so heavy that they never again attempted to chase the patriots from the hills around Boston. From there, the patriots could fire their cannons at the British below, knowing that they could not return the fire as their cannons could not reach the heights above. By the following year, the British concluded it was better to simply desert Boston than try to defend it under such circumstances. Item 21. $20,000.

Item 28 is an unusual take on the "Back to Africa" movement of the pre-Civil War days. It was an abolitionist movement which called for freed blacks to resettle in Africa, Liberia in particular. It had mostly white, some black, support. Some supporters believed that blacks would have a better future in a land they controlled than a hostile America. Others simply wanted to get rid of them. Coates was a Quaker who, we will assume, was motivated by good sentiments. His argument was published in 1858 under the title, Cotton Cultivation in Africa. Suggestions on the Importance of the Cultivation of Cotton in Africa, in Reference to the Abolition of Slavery in the United States... Coates believed that if cotton were cultivated in Africa, it would provide competition to that grown in the American South, ultimately making cultivation in the South less competitive, and in turn leading to the collapse of the slave system. $850.

Item 15 is The By-Laws and Town-Orders of the Town of Boston, Made and Passed at Several Meetings in 1785 and 1786, published in 1786. It regulates galloping horses, dogs, swimming and skating on the Lord's Day, snowballing, and guns and pistols (this was pre-Second Amendment). Other laws pertain to carriages, chimneys, "Distill Houses," fire engines, vagrants, food, public nuisances, and prohibits "Excess and vain Expense" in mourning ceremonies. They also outlaw the playing of football, or kicking it through any part of town. Every opponent of the New England Patriots wishes that prohibition was still in place!* $1,750.

*Technically, the Patriots play in Foxborough, but close enough.