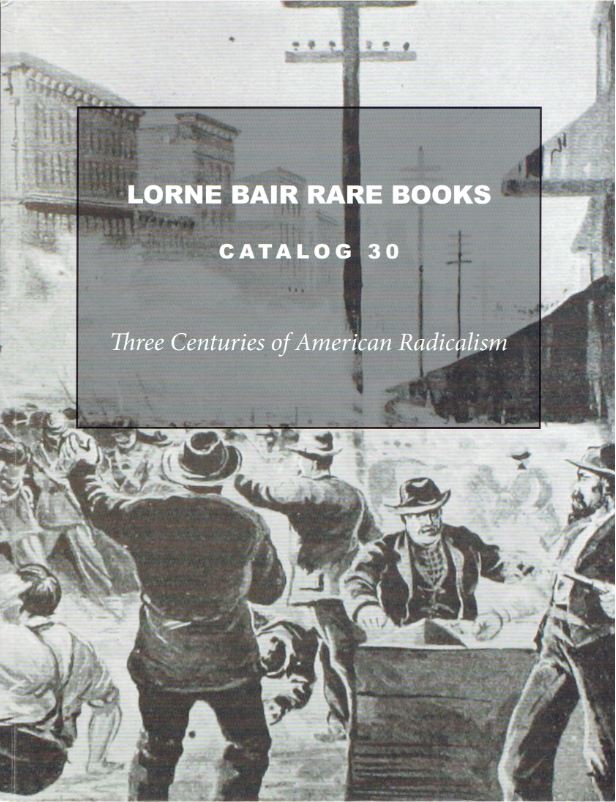 Lorne Bair Rare Books has issued their Catalog 30. Three Centuries of American Radicalism. This is not your typical Bair catalogue. It's a massive production, 500 items all fully described and illustrated. All the usual suspects for radical literature are to be found, Utopian societies, anarchism, the I.W.W., socialism, communism, counterculture, labor and unions, radical literature, crime and punishment, African Americana, Latino, women's movements, LGBTQ, pacifism, free thought, and the environment. As you might guess, these are predominantly radical movements of the left, but Bair provides some balance, mostly in a section obviously tongue-in-cheek headed "American Exceptionalism." These are people who felt that their race, ethnicity, orientation, religion, gender - anything but intelligence - made them exceptional. Some of it sounds disturbingly similar to thoughts that once seemed to have been discarded, but have again become more acceptable to express these days. Here are a few of the many expressions of radical views to be found in this thick catalogue.

We begin with a book that didn't have quite the negative connotations to its title in its time as it would have had later on - The Communistic Societies of the United States; From Personal Visit and Observation. The visitor/observer/author was Charles Nardhoff and the publication date 1875. In that era, a "communist" was not a supporter of Russia. These were communes, cooperative societies that flourished in various locations in the 19th century but eventually proved unsustainable. Such a level of subordination of individual interests to the group has never been a great fit with the American character. Nordhoff looks at such well-known communal societies as those of Bethel, Aurora, Amana, Oneida, Zoar, and the Shaker communities. This copy bears the bookplate of Frederic Rowland Marvin, a clergyman, physician, prolific writer of essays, stories, medical theories, and verse covering a wide array of subjects, or, as Bair describes him, "author of several undistinguished volumes of essays and verse." Item 7. Priced at $350.

Here is an obscure piece of communist propaganda aimed at American soldiers during the time of the Russian Revolution. Near the end of World War I, America sent around 5,000 soldiers to northern Russia, the North Russia Expeditionary Force, or familiarly, the Polar Bear Expedition. They were sent at the request of Britain and France to guard Allied war supplies from both the Germans and the Bolsheviks. They fought the latter, who issued this circular to discourage American soldiers. It is titled, Capitalst [sic] America, Socialist Russia. The unnamed authors describe themselves as "...some of us born Americans, some Russians who have been in America..." The circular claims the conflict is devised by "tzars Morgan, Rothchild [sic] and Rockefeller" and encourages the Americans to "do the decent thing...by breaking the discipline that drives you to this crime against your own kind the working class." Many of the American soldiers did become disenchanted with their role once the war against Germany ended, but it was less likely because of Bolshevik propaganda than because no one could really explain what they were doing up there in the cold any longer. They came in 1918, but were withdrawn in 1919, which dates this circular. Item 127. $1,250.

Next we have a magnificent color poster, 15 3/8" x 25" from 1906 promoting a book, and this one will appeal not just to the radical left, but those of more plain liberal or moderate sympathies. It proclaims boldly, The Jungle By Upton Sinclair. At the bottom, it lists the publisher, "Doubleday, Page & Co. New York." The rest is devoted to a ferocious-looking lion, sitting on top of a steer's skull, stylized factory smokestacks in the background. The artwork came from graphic artist Charles Edward Hooper. Sinclair was a radical leftist, a supporter of such causes, though not many are aware of this any more. His book was meant to be an attack on the miserable working conditions of immigrant laborers in Chicago's meatpacking industry. However, readers were stunned by something else they learned from Sinclair's book, just how grossly unsanitary conditions were in the plants. After all, this was the food they were eating. As Sinclair later observed, "I aimed for the public's heart but by accident I hit it in the stomach." Item 244. $8,500.

Here is a very rare item, a mimeograph copy of a speech given by Martin Lither King at the NAACP convention in San Francisco in 1956. Bair has only located three other copies of this first publishing of King's speech, which did much to put him in the national spotlight. The title is The Montgomery Story. It recounts the Montgomery Bus Boycott, which King notes began with Rosa Parks refusing to give up her bus seat to a later arriving white passenger. King points out that the protesters were subject to violence and death threats by the "reactionary element of the white community," along with false arrests and imprisonment by local officials. It only made the black community stronger, he responded. King also gives credit for the philosophy of nonviolence to Gandhi, who he ways "...was able to free his people from the political domination, the economic exploitation and the humiliation inflicted upon them by Britain." Item 356. $12,500.

Opposition to America joining the Second World War on the side of the Allies notably came from the right, the pro-Nazi German-American Bund, the America First Committee and its spokesman Charles Lindbergh. Both had their share of pro-German, antisemitic supporters. However, early on there was also strong support for nonintervention by the far left as well. At that point, Hitler and Stalin had divided up Poland and had signed a non-aggression pact. American supporters of both Germany and the Soviet Union did not want America intervening on behalf of England and its allies. Item 143 is a pamphlet published by the American Peace Mobilization in 1940, headed Can The People Win Peace? The APM, which was funded by the U. S. Communist Party, argues for peace. However, it would quickly change its tune when Germany invaded the Soviet Union, thereafter immediately demanding America join the effort against Germany. The Right would continue arguing for peace until Pearl Harbor, when their opposition quickly became untenable with an angry American public. $125.

This next item is a communiqué headed New Morning - Changing Weather. It is not from some meteorological society. It comes from the Weather Underground, previously known as the Weathermen, and they weren't into forecasting the weather. This was a highly radical, though short-lived 1970s group of primarily white youth, radical as the Black Panthers but not eligible for that group for obvious reasons. Their means of protest was blowing up buildings. They saw it as bringing the violence of war they believed America was imposing on other nations home, particularly during the era of the Vietnam War. They would blow something up and then issue a communiqué. However, they did forewarn of planned attacks and avoided detonations when there would be people around. Only three people were killed by the Weathermen, and that was three of their own members in an accidental explosion. This communiqué was different from most in that it didn't accompany a bombing. It acknowledges that its bombing didn't amount to much more than a "bee sting," but that it still had an effect in that now "the world knows that even the white youth of Babylon will resort to force to bring down imperialism." Item 181. $250.

It's time to give the other side its due. Item 312 is The Peril of Hunkey Hollow, by "Senah Nedra" (actually, Rev. Arden Haynes). Haynes was the pastor of the First Christian Church of Brownsville, Pennsylvania. This 1926 book sounds somewhat familiar today as it is anti-immigrant, except in those days, the despised immigrants came from the east and west, rather than the south. "Hunkey" originally referred specifically to Hungarians, but came to mean anyone of Eastern European origins. In the preface, Haynes refers to the peril caused by the existence of "such places as 'Hunkey Hollow,' 'Little Italy,' and 'China Town.'" He warns that a generation of a thousand alien workers will lead to "a second generation of ten thousand alien workers growing up in our midst, in a matter ten times more serious." Evidently, those immigrants must have been quite prolific, averaging ten children per family. This copy contains an inscription from "The Author." $450.