The House of Romanov from Shapero Rare Books 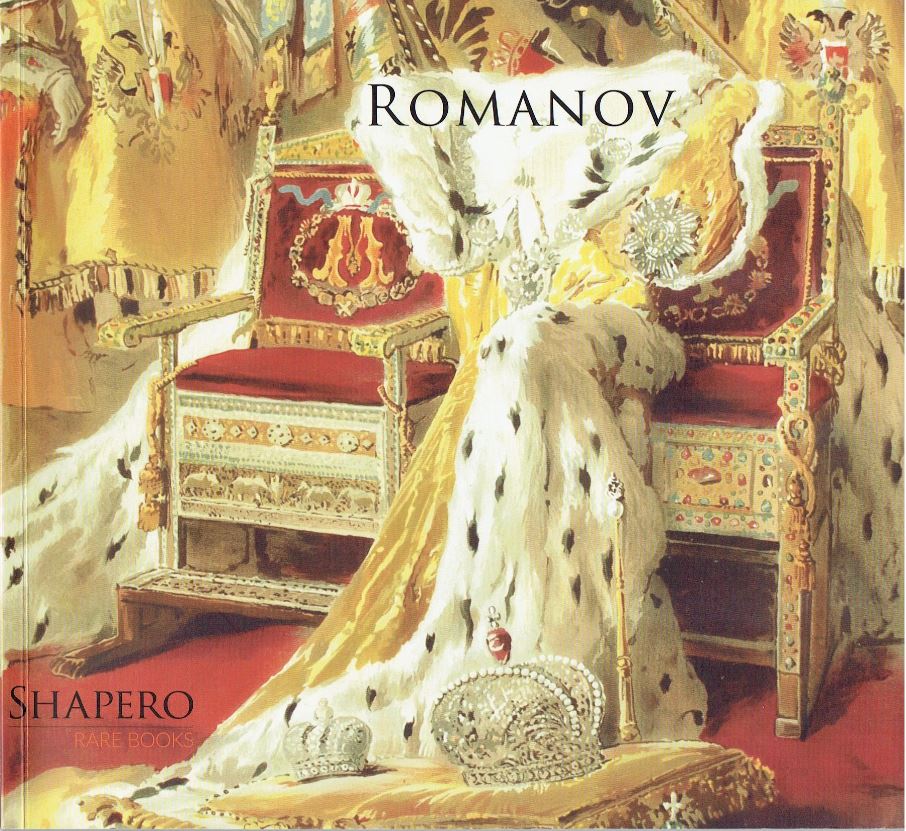 The House of Romanov.

Shapero Rare Books has prepared a catalogue of material relating to The House of Romanov. The Romanovs ruled Russia for 300 years. The family came to power somewhat reluctantly during a time of uncertainty in 1613. Late in that century, they would begin to rise to the role of an international power under Peter the Great. The Romanovs would continue unchallenged until late in the 19th century. Their popularity then began to wane, a defeat against the Japanese in 1904, and enormous casualties during World War I further eroded the last Romanov Tsar's power. He abdicated during the Revolution of 1917, and Tsar Nicolas and his family were executed by Bolsheviks in 1918.

Many of the items in this catalogue are in the Russian language, and we cannot display their Russian titles because they use the Cyrillic alphabet. However, many others are written in French, some in English. Here are a few samples from this catalogue.

We begin with the first item in the catalogue, which takes us all the way back to the beginning of the dynasty. It is not contemporary. It is the only printed account of the wedding of the first Romanov Tsar, Mikhail, to Evodokiia Stereshnev in 1626. Mikhail had been married in 1624, but his first wife died only four months later. This highly illustrated account of the wedding was published in 1810. Platon Petrovich Beketov, who operated his own press, conducted a great amount of research, including use of an historical manuscript account, to create the book. This copy includes the full compliment of 65 illustration (most copies have 63) and the images have been hand-colored. Mikhail was a gentle ruler, not at all the tyrant, and his rule saw great expansion of Russian territory. Item 1. Priced at £16,500 (British pounds, or approximately $21,086 in U.S currency).

Next we move along to Mikhail's grandson, one of three to become Tsar. He is perhaps the greatest of all, which logically explains having "Great" in his name. Actually, he was Peter I, but everyone knows him as Peter the Great. For a while, he was a co-regent with his half-brother, but including that time, he was Tsar from 1682-1725. During that period, Russia grew to an empire, and Peter, appropriately enough, became as emperor. Peter ruled over not only a larger Russia, but a modernized one as well. He sought to learn from other countries, westernizing the more backward country, while strengthening a weak military. His was, for the most part, a progressive rule, though Peter could be brutal with his enemies. Item 2 is the almost contemporary History of the Life of Peter I. Emperor of Russia, by John Mottley. Mottley was an English scholar, but usually wrote anonymously as his father was forced into exile for his support of James II, deposed in the Glorious Revolution. Late in life, Mottley wrote two books under his own name, this being one. It was almost contemporary with Peter's reign, having been published in 1739, 14 years after Peter died. It was published in London and is written in English. £2,500 (US $3,198).

Actually, Peter wasn't the only great Tsar. There was also Catherine II, known as Catherine the Great. After disruptions in the direct Romanov line, her husband, Peter III, became Tsar in 1762. His mother was a daughter of Peter the Great, but he was raised in Germany, and while a great reformer, attempting to initiate democratic and humanitarian reforms, his pro-Prussian stands were not well received. He also had a bad relationship with his wife, Catherine, and both conducted extra-marital affairs. This poor relationship more than foreign policy was instrumental in Catherine joining with others to overthrow her husband after just half a year as Tsar. Peter III died under mysterious circumstances a short time later. Catherine, on the other hand, ruled from 1762 until her death in 1796. Catherine, too, was a reformer, though perhaps not as much as her husband wished to be. Item 9 is a copy of Catherine's Instructions in French, Instructions. Adressées par sa Majesté l'Impératrice de tourtes les Russies... published in 1769. This French edition was published by the Russian Academy of Sciences but not offered for sale. Catherine had read texts of the French Enlightenment and this was an enunciation of her intention to bring these ideas to Russia. The Instructions were never really implemented, but it was a good thought. Item 9. £1,800 (US $2,303).

Item 46 is a lavish book dedicated to an exhibition by the Committee for the Construction of the 1812 Museum in Moscow. This does not pertain to the War of 1812 known by Americans. In Russia, this was the year the Russians forced Napoleon to retreat from Russia, not because of defeat on the battlefield, but by denying his troops access to supplies. Russian winters are not easy to survive without adequate supplies. An exhibition was prepared on the 100th anniversary in 1912, with exhibits housed in the Historical Museum on Red Square pending construction of the new museum. Material was gathered from other museums and private collections. There was more than could actually be displayed, and some of the items herein were therefore not on display. Unfortunately, the delay took the project into the time of World War I, and then there was the Russian Revolution, and the project was abandoned. However, such a museum was opened on the 200th anniversary of Napoleon's defeat. £7,000 (US $8,958).

Romanov rule would come to an end in 1917. Nicholas II, who became Tsar in 1896, had little ability to handle the deteriorating situation around him. He was the wrong man at the wrong time. Military defeat by Japan, terrible casualties during the First World War, workers' demands answered with a slaughter in 1905, and finally revolution sealed his fate. Nicholas abdicated in 1917, he and his family were killed in 1918. Item 31 is sort of a last look at the old order. It is a photograph, circa 1913, of his four daughters, Olga, Tatiana, Maria, and Anastasia. The close-knit sisters, who were also great-granddaughters of England's Queen Victoria, look bright but innocent, the four surrounding a table with an open book. Each of the sisters has signed the photograph and it is dated 1916. They could not have imagined the terrible fate that awaited them just two years hence. £35,000 (US $44,792).