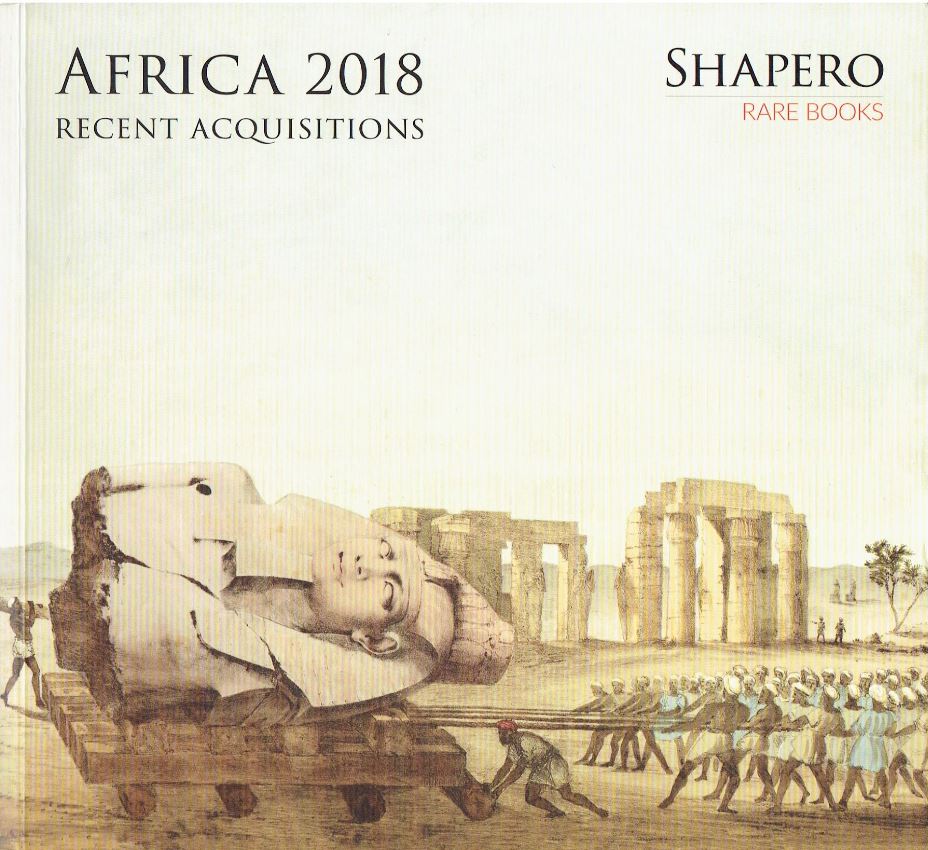 Shapero Rare Books a short time ago issued a catalogue entitled Africa 2018. Recent Acquisitions. These works are primarily from the late 18th or 19th century and most are British in origin. The British were intimately involved with the large continent across the Mediterranean during this period. They, like some of their European cohorts, were busy colonizing the continent at the time. However, there were also numerous explorers who came from England, their intentions being to learn and discover, rather than capture. And then there was one other factor that brought the English to Africa - the slave trade. During the 18th century, the English were gladly taking African slaves to work their Caribbean plantations. By the 19th century, that mission changed, as England outlawed the slave trade and sent its ships to the African coast to enforce that decree against those nations or private sea captains who attempted to continue their trade in human cargo. Here are a few selections from this catalogue.

Europeans were long fascinated by the Nile River, known to them for millennia. Everyone knew where it ended, but no one knew where it began. In 1768, English explorer James Bruce set out to unravel the mystery. By passing himself off as a physician, Bruce was able to obtain the necessary diplomatic papers to proceed on his journey. He traveled up the river to Aswan, but then headed east to the Arabian peninsula. Hostile tribes made it impossible to continue further up the Nile. He then crossed back into Africa, to Gondar in Ethiopia. That enabled him to return to the Nile at Lake Tana. Voila. He discovered its source in the "Fountains of the Nile," springs around Lake Tana. At least he thought so. Not quite. He discovered the source of the Blue Nile, which had actually been discovered by Portuguese Jesuits a century and a half earlier. The Blue Nile is considered a tributary of the recognized source, the White Nile. It would be almost another century before that source would be discovered. Bruce made the arduous trek back, including 400 miles through the Arabian desert, to return home in 1774. Item 21 is Bruce's account, Travels to Discover the Source of the Nile, in the Years 1768...1773, not published until 1790. Priced at £7,500 (British pounds, or approximately $9,901 in U.S. dollars).

That same year, a new organization published its findings about Africa, Proceedings of the Association for Promoting the Discovery of the Interior Parts of Africa. Headed by Sir Joseph Banks, a group of wealthy Englishmen formed what is better known simply as the African Association in 1788, for the purpose of exploring Africa. In particular, they wished to determine the route of the Niger River and find Timbuktu, the legendary city whose streets supposedly were paved with gold. They had already learned much by 1790, having sponsored a couple of missions, but had not answered their major questions. Five years later, they sponsored the exploration of Mungo Park, and while he did not find where the Niger terminated, nor see Timbuktu, he came home alive and with knowledge of the region, his mission capturing the imagination of his countrymen. Membership and contributions to the association swelled. It continued until 1831 when the African Association merged into the Royal Geographical Society. Item 2. £2,500 (US $3,300).

Among the greatest explorers of the internal regions of Africa was David Livingstone. Livingstone was a missionary, sent to Africa by the London Missionary Society in 1840. He proved to be a better explorer than missionary. His journeys brought him from coast to coast through the center of Africa, visiting lands never before seen by a white man. He discovered the Zambesi River and Victoria Falls. He relayed his findings back to England, including descriptions of the slave trade that encouraged the British to do more to end it once and for all. Item 57 is an account of his first major explorations on the continent, along with his earlier missionary residency, Missionary Travels and Researches in South Africa, published in 1857. £1,250 (US $1,650).

David Livingston was "lost," or at least out of contact with Europe, for several years, but everyone has heard about the finding of Dr. Livingstone, I presume. Here is the account, How I Found Livingstone. Travels, Adventures, and Discoveries in Central Africa, Including Four Months' Residence with Dr. Livingstone, by Henry Morton Stanley, published in 1872. Stanley was sent to Africa by the New York Herald to find Livingstone and the source of the Nile, already discovered but still a matter of some dispute. Stanley found the missionary-explorer near Lake Tanganyika, which he determined did not empty into the Nile. He spent four months with the ill Livingstone, nursing him back to health. The two became close during their time together. Sadly, Livingtone's health did not hold up for long. He died two years later. The younger Stanley went on to further explorations. Item 87. £1,500 (US $1,973).

America had its Audubon, England its Gould. France had Francois Levaillant. He preceded the others. Levaillant was born in Africa in 1753, and his wanderlust brought him back to explore the southern part of the continent. He had an interest in animals, and birds in particular. That interest translated into this book, six volumes published 1805-1808, Histoire naturelle des Oiseaux d'Afrique (natural history of African birds). The illustrations, provided through the efforts of Jacques Barraband, were printed in color with enhancements by hand. Item 55. £50,000 (US $65,800).

Next is a collection of 22 gelatin silver prints taken by Harry Burton in 1923. They were taken at the unsealing of the tomb of Egyptian King Tutankhamen. King Tut's grave provided an incredible collection of artifacts, including the body of the King himself, as it had been undisturbed by grave robbers since the King was buried 3,000 years earlier. Burton was from the Metropolitan Museum of Art and was the official photographer for the excavations. Most of the photographs show the inner chambers of the tomb and objects discovered, but there is also one of Howard Carter, who conducted the excavations, and Lord Carnavon, who financed them. Item 22. £4,750 (US $6,252).