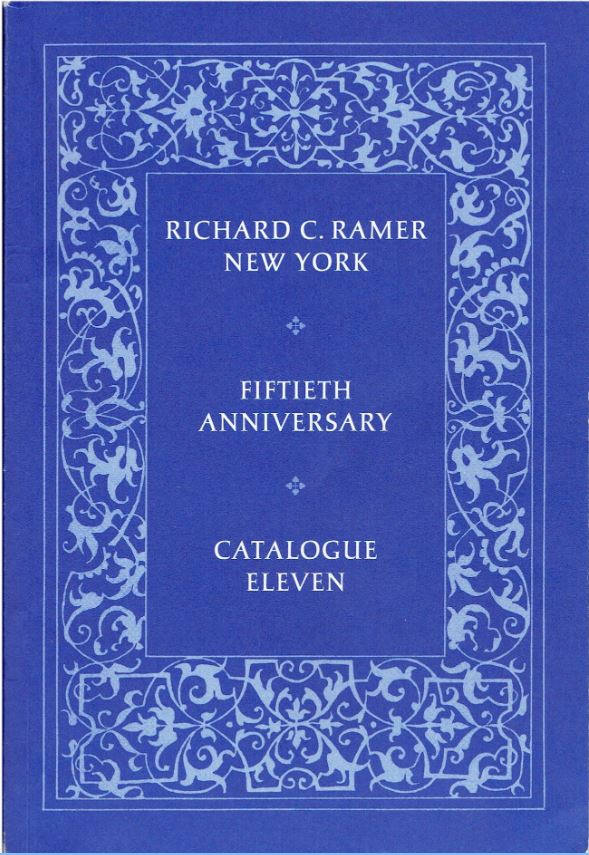 Richard C. Ramer Old and Rare Books has issued their Catalogue Eleven, Fiftieth Anniversary. Appropriately, it contains 50 items, well-described and illustrated. Ramer has specialized all these years in Portuguese and Spanish material, not limited to just what is happening in Portugal and Spain, but to their possessions, travels, and relations all over the world. Naturally, much of what they have to offer relates to the Americas. They have selected 50 of their finest items for this anniversary collection. Those who collect the Iberian Peninsula and its relationships around the world will enjoy this selection. Here are a few samples.

We begin with an account of an American (as in today's U.S.A.) expedition, written by the first native born son of the Americas to publish a book. His name is Garcilaso de la Vega, though he is most commonly known as "El Inca" (the Inca). That name was applied to distinguish him from his father, a Spanish captain and conquistador, while his mother was an Inca princess. Garcilaso was raised in Peru, much of the time with his Inca family, but left for Spain when he reached the age of 21. He never returned. He was able to adopt his father's family name through the help of an uncle. El Inca wrote several books, and he provides one of the best looks at Inca life prior to the arrival of the Spanish. He leaned of it from his mother's family. However, this, his first book, concerns events of which he could only learn from afar, the expedition of Hernando de Soto into what is now the southern United States. De Soto was the first European to enter this territory and the first to cross the Mississippi River. He landed in Tampa Bay in 1539 and proceeded north and then west by a route only partially known today. He appears to have traveled as far north as South Carolina before proceeding west through Georgia, Alabama, Mississippi, and across the river to Arkansas. De Soto was not an explorer like Lewis and Clark, seeking information about the continent. He hoped to find gold. He did not. They were lucky to get that far, as the demands he placed on the natives for food led to repeated confrontations and battles. De Soto took ill and died in 1542 on the west side of the Mississippi. The survivors tried to return to Mexico overland and got as far as Texas before food sources dwindled. They returned to the Mississippi, traveled downriver, and were rescued by sea. El Inca obtained his information about the expedition from survivors and others who heard stories second hand. The book is La Florida del Ynca, published in 1605. While based on fact, scholars caution that it contains exaggerations and misplaced details about their route. They consider it partly literature, partly history, rather than a true history book. Item 49. Priced at $150,000.

While El Inca was the first American-born author, his book was printed in Lisbon. The first printer in South America was Antonio Ricardo. Ricardo was granted permission by the Jesuits to print their texts in Lima, Peru. His first South American book came off the press in 1584. Ricardo had operated his press earlier in the Americas, Mexico City to be specific, but there was no printing on the South American continent prior to his move to Lima. Item 9 is Tercero cathecismo y exposicion de la Doctrina Christiana... This was the third or fourth book printed in South America, in 1585, the year after the first. This copy is signed by José de Acosta, one of the two Jesuits responsible for its production. It is a catechism, written in Spanish, Quechua, and Aymara. Quechua was the language of the Incas, Aymara was spoken in the Andes. $300,000.

This next book is an important medical text. Ramer describes it as the "first medical description of a yellow fever epidemic" and the "description of the first autopsy of a yellow fever victim." It was published in 1694, and there would be many more yellow fever epidemics and victims in the following couple of centuries. The author was Joao Ferreira da Rosa, the first European to treat the disease. While the book was published in Lisbon, da Rosa was a physician in Recife, Brazil. The book is presented in a question and answer format, and while it represents medical knowledge of the time, it asks some questions you would not want your doctor to ask today. For example, it asks whether it is better to bleed a patient from the arm or the foot. How about neither. This was the first appearance of yellow fever in South America, it having come from Africa where natives had developed some immunity to the disease. Those in Brazil had none. The title of da Rosa's book is Trattado unico da constituicam pestilencial de Pernambuco... Item 38. $45,000.

Next we have Views of South America by William Gore Ouseley, published in 1852. This is a two-volume elephant folio set. It comes with Description of Views of South America, from Original Drawings... also published in 1852. Among the images drawn by Ouseley are Rio, its mountains and churches, the British headquarters, Montevideo, Ouseley's home in Buenos Aires, and more. Despite his accomplished artwork, Ouseley's main occupation was not as an artist. Rather, he was a British diplomat, who served in various posts in the Americas during the nineteenth century. He also wrote books about the political institutions in the United States and the African slave trade, with notes on its suppression. Laid in to the book are four elephant folio leaves from a biography of Ouseley in Portuguese, including a photograph of him and his wife. Item 31. $35,000.

Also offered in the catalogue is the Robert Southey Collection. Southey, who lived from 1774-1843, was a prolific writer, known well in his time for his poetry. For 30 years, he was England's Poet Lauriate, one of the "Lake Poets" with Wordsworth and Coleridge. Along with his poetry, Southey was the author of several biographies and was a student of Portuguese and Spanish literature. Among these works is his History of Brazil. Ironically, despite his literary and historical achievements, the one work that Southey wrote with which everyone today is still familiar is The Three Bears. This collection contains 265 of his printed works (449 volumes), including presentation copies, early editions, and first American appearances. There are also printed collections of his letters, two autograph letters, and two manuscript fragments in Southey's hand. Price on request.

Richard C. Ramer Old and Rare Books may be reached at 212-737-0222 or rcramer@livroraro.com. Their website is found at www.livroraro.com. The bookseller maintains locations in New York and Lisbon.