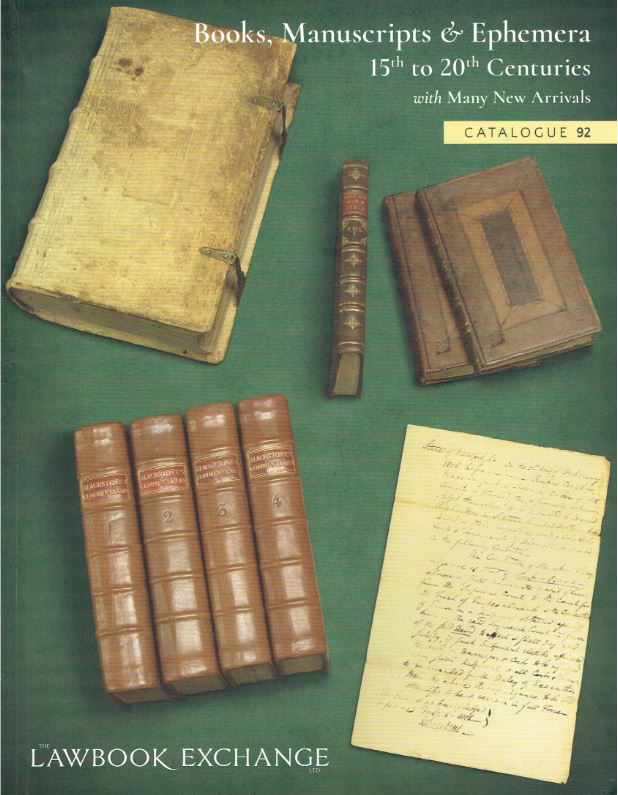 The Lawbook Exchange has released a new catalogue of Books, Manuscripts & Ephemera 15th to 20th Centuries with Many New Arrivals. This is a thick catalogue with over 150 items, each well described and illustrated. They range from the more legalistic types of treatises to accounts of sensational trials that everyone wanted to read about in their day. There is also a selection of very old law books, early printed editions of texts, some of which first appeared centuries before the invention of printing in manuscript form. This is an exciting collection of the law for both legal scholars and laymen fascinated by the workings of the law. Here are a few samples.

We begin with the earliest compilation of English case law, one that predates printing by a couple of centuries. However, this is the first printed edition, published in 1569. The title is De Legibus et Consuetudinibus Angliae... (on the laws and customs of England), the author Henry de Bracton. It was written between 1250 and 1256. De Bracton was an English jurist, and his work shows the influence of Roman law, but with an English character. De Bracton separated substantive from procedural issues, and while previous decisions did not yet constitute case law, he provided the reasoning behind prior cases, making their use as precedent a logical conclusion. This work is generally considered the best English legal work of the Middle Ages. Item 18. Priced at $12,500.

Fast forward five centuries and we have the most notable commentary on English law ever written. We can add American law as well, as it is an offshoot of English law, and item 12 is a first American edition of Commentaries on the Laws of England. The author was William Blackstone, and this work is generally just known as Blackstone's Commentaries. It was published in 1771-72. Even after the Revolution, Blackstone's Commentaries remained the premier law text in America, since there was no separate American law at the time. It continued to play that role through most of the 19th century. It comes in four volumes, the final one including the 839-name subscriber list, which included John Adams, John Jay, John Dickinson, and sixteen signers of the Declaration of Independence. $12,500.

Poetry is not always uplifting, as this miserable title painfully reveals: A Poem of the Depressing and Afflictive Death of the Rev. Josiah M. Muspratt. Who Was Killed in an Awful Manner; Being Caught Up in the Machinery of Whitesborough Factory, Carried Up to the Floor Above by His Arm, Where it was Drawn from his Body, From Whence He Fell Again to the Floor, Torn and Lacerated in the Most Shocking Manner; May 1827. Welcome to the industrial age, Rev. Muspratt. That title really makes you want to read more. Rev. Muspratt was a Methodist minister as well as Superintendent at a weaving mill in Whitesborough, New York. The poem describes him as a Christian martyr who sought to save the souls of the factory workers. This broadside is attached (on top of) another broadside poetic masterpiece: The Dying Words, Confession, And Execution of Jesse Straang, For the Murder of John Whipple, at Albany, August 27, 1827. No more squeezing the Charmin for Mr. Whipple. John Strang (misspelled here with an extra "a") fell in love with Mrs. Whipple, Elsie Whipple, a member of the prominent Van Rensselaer family. They conspired to kill Mr. Whipple. Elsie was acquitted, but Jesse was not so fortunate. His hanging was the last public execution in Albany. Item 21. $1,750.

Item 108 is a first edition of Reformacion der Stat Nuremberg. This is the reformed legal code of the city of Nuremberg. It was enacted in 1479, though this first printed edition was issued in 1522. Nuremberg was a cultural center during the Renaissance, and its code reflects its position, straightforward and humanistic. However, it is not the first printing of this important legal code that is the most notable feature of this book. Rather, it is the full-page frontispiece illustration in it. It is the first appearance of Lady Justice in a book, and the artist was Nuremberg's great artist-son, Albrecht Durer. It originally had been issued as a separate print a year earlier. Lady Justice is depicted on one upper corner of the image with a sword in one hand, the famous scales in another. Across from her is Charity, who pours out coins from a purse near her heart. $12,500.

Next is a broadside from the Jim Crow era in the South, a racist attack on another racist, as political candidates jockeyed for position as the more anti-black candidate. Item 20 is unattributed but lithographed by F. A. Hull in 1904. It is an attack on Judge Francis D. Winston's campaign for Lieutenant Governor of North Carolina. Its headline screams out, A Sample of Democratic White Supremacy in North Carolina. Judge Winston's Dream of Riding the District with George H. White the Negro of "Inflooence." It depicts Winston riding in a carriage with a grotesquely racist stereotype of former Reconstruction-era Congressman George H. White, the last African American after his retirement in 1901 to serve in Congress until 1928, and the last from North Carolina until 1992. It continues by quoting a supposed letter from Winston to White while running for judge in 1890 describing the "remote possibility" of riding the district with White as "a great pleasure." It concludes by asking "Are the people of North Carolina going to elect Judge Francis D. Winston Lieutenant-Governor?" A bit of history is necessary to understand what is going on here. Winston had once been a Republican, and as such, presumably of relatively moderate views. However, perhaps seeing the writing on the wall, he switched to the Democratic Party by 1896 on account of the fusion between the Republicans and the Populists, which also included blacks among their small farmers and laborers. Winston then led one of the "Red Shirt" campaigns, the Red Shirts being a racist terror organization similar to the KKK. Winston promoted a "white supremacist" agenda. The broadside ridicules Winston by treating his "white supremacist" talk as if referring to black Congressman George White, rather than the white race. Winston was elected. $1,850.