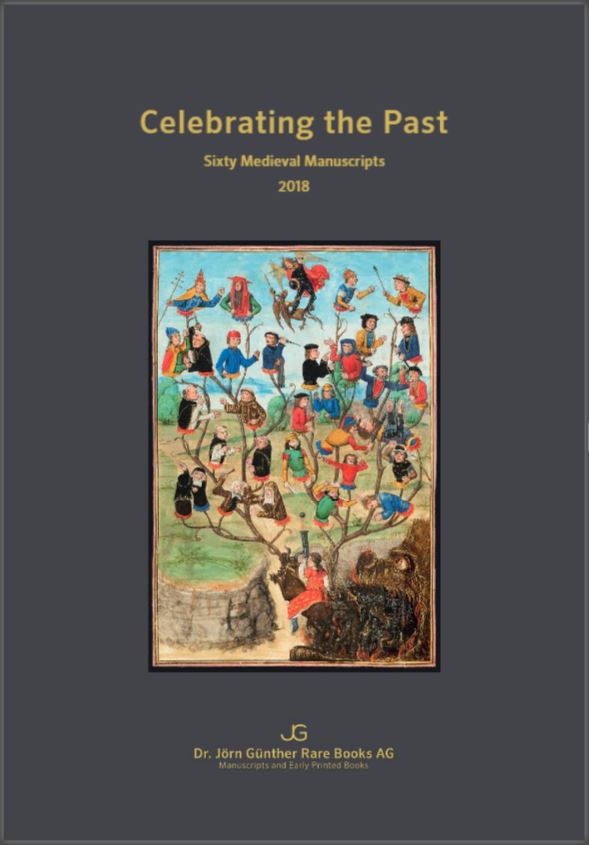 Dr. Jörn Günther Rare Books has created a spectacular catalogue entitled Celebrating the Past. Sixty Medieval Manuscripts. These are works of art, labors of love, and very old. The Medieval period is generally thought of as running from the fifth through the fifteenth century. A few come a few years later, the early 16th, but these are manuscripts created five or more centuries ago. They range from the tenth century to 1521. Twenty-five of them predate Gutenberg.

The Medieval period, or Middle Ages, is sometimes referred to as the "Dark Ages." With the fall of the Roman Empire, learning fell into a dark period, scholarship drying up. In this catalogue, we see there was light even in the darkest times. Naturally, theology is a major theme. Writing and scholarship mainly took place in the institutions of the church. Nevertheless, from these manuscripts we find a variety of learning and artistic expressions. Subjects found within these manuscripts include religion, devotions, legends, literature, poetry, law, art, music, theater, history, heraldry, exploration, science, medicine, magic, and politics. Günther notes that the "manuscripts and their illuminations connect us to mankind and to human history, providing a glimpse of the worlds and eras in which they were created."

Still, it is usually not the knowledge within these manuscripts that make them so valuable and highly desirable to collectors. It is, after all, quite dated, and not all that many people can read Latin, the primary language used among the educated in Europe at the time. What is stunning is the beauty, the calligraphy of the writer or scribe, the artwork and coloring of the skilled hands that created these manuscripts. Not only were they not mass productions of printing presses, they were not the scribblings of people with interesting things to say but no artistic skills for enhanced expression. These are mostly works of art as well as text, and this and their great age and rarity is what combine to make antiquarian, illustrated manuscripts so highly valuable today. Two of the top five most expensive items at auction in the books and paper field last year were 15th century illuminated manuscripts. That is how much these ancient illustrated works by obscure artists, often in some isolated monastery, are treasured today. This catalogue is filled with such works.

The catalogue is arranged in chronological order, item 1 being the manuscript dated to the 10th century. It is one of the great works of the Middle Ages, from a scholar some consider the last of the early church fathers, though he may be a bit late to be early. Isidore of Seville lived during the sixth and seventh centuries. He was the Archishop of Seville in what is today Spain. His great work is the one that was copied on this manuscript, the Etymologiae. It was written over a period of years, roughly 600-625. It contains 20 books, filled with all sorts of knowledge available at the time. It is something of an encyclopedia, compiled from hundreds of scholarly works dating back to Greek and Roman times. While technically an etymology, a study of the origin of words, it covers a myriad of other subjects, both religious and secular. Among these are mathematics, geography, canon law, religion and heresies, medicine, animals, the human body, agriculture, weights and measures, and much more. It was the major textbook of this period, and provides us with text from works that are now lost.

This copy of the Etymologiae was written in multiple scribal hands. It contains the scribe's colophon, translated, "Who does not know [how] to write, thinks that this is not a worthy job. In fact, three fingers write, [but] all body parts work. As good is the best harbor for him who sails, so good is also the latest verse for him who writes." There are also various notations through the text, both contemporary and from the following couple of centuries. It contains various charts, a "T-O Map" ( a very primitive world map divided into three sections - Asia, Europe, and Africa) and one of Anatolia (Asia Minor).

Item 6 is a manuscript of Decretum Gregory IX (Decretals of Pope Gregory IX) with Constitutiones novissimae of Gregory X and other legal texts. The papacy of Gregory IX ran from 1227-1241. Gregory IX was noted for attempting to achieve greater order in the church. Along with the Decretals, laws issued by the Pope, he is noted for the Papal Inquisition (not to be confused with later Spanish and Roman Inquisitions). While inquisitions don't sound good, this one may have been kinder to those accused of heresy than the alternative of the day. Back then, civil governments could enforce heresy laws, and did so without fair trials, on the whim of local authorities. Gregory sought to provide ground rules for such trials and afford those accused the opportunity to repent and avoid the brutal punishments often inflicted on those found guilty. In his Decretals, the writing of which he assigned to Raymond of Penyafort, Gregory IX had Raymond compile the various canon laws into one text where they could all be found and readily applied. The Decretals were compiled during the 1230s.

This manuscript was created around 1281. It features beautiful artwork, three historiated initials and five miniatures. The finely colored miniatures tell stories, such as the Pope speaking with his counselors. The details in the artwork suggest it is the work of the famous illuminator Maitre Honoré of Amiens.