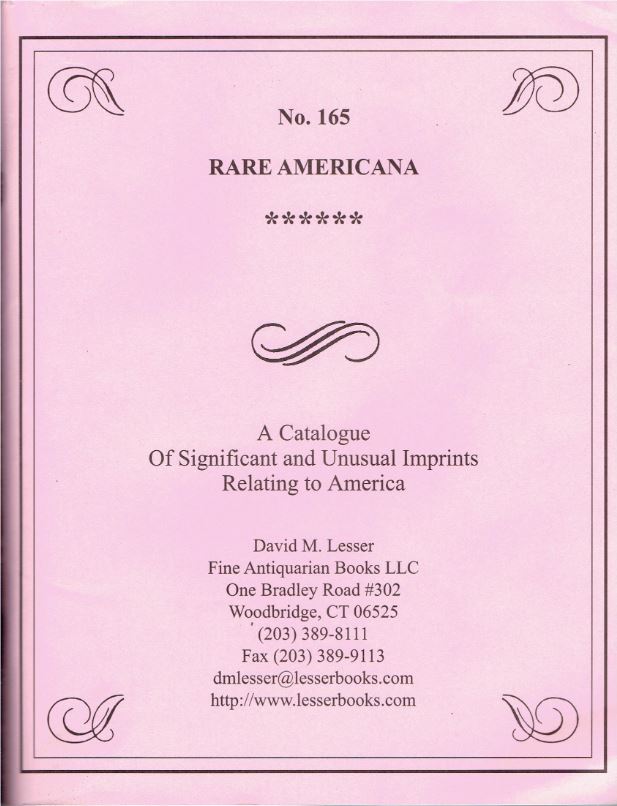 David M. Lesser Fine Antiquarian Books has issued their Catalogue 165 of Rare Americana. You can add to that a few British items. The material is overwhelmingly 18th and 19th century, although that is excepted by a 1963 unfathomable letter from the great boxer, Archie Moore. If you think it is unfathomable because Moore was a punch-drunk fighter, the problem is that it contains ancient Greek and current references that are too complicated for most to follow. Here, now, are a few of the older items to be found in this latest Lesser catalogue.

We hear of a lot of "firsts" for women these days as long overdue gender equality pushes forward. Here is a long ago first for a woman, but it is unlikely that Bathsheba Spooner wanted this honor. Mrs. Spooner was the first woman to be executed in America after the nation declared its independence in 1776. Bathsheba was the daughter of a prominent judge and lawyer who married Joshua Spooner in 1766. He was a man of means, but not excitement, and Mrs. Spooner wanted to live well, both financially and psychologically. At the time of the revolution, the Spooners came to know a young soldier, Ezra Ross, a handsome young man, not yet 18, many years her junior. The two became involved, Mrs. Spooner became pregnant, and she decided she wanted to be rid of Mr. Spooner. She convinced two escaped British prisoners of war along with Ross to do away with Mr. Spooner. That they did, and dumped his body in the Spooner well. It took about a day for authorities to discover the crime and gain confessions from the two escaped prisoners. A trial was held, all four convicted, and all sentenced to death. Bathsheba attempted to delay her execution because of her pregnancy but to no avail. The four were hanged together in Worcester, Massachusetts, on July 2, 1778, before a crowd of 5,000. Item 51 is a requiem for Mr. Spooner, A Sermon Preached at Brookfield March 6, 1778. On the day of the Interment of Mr. Joshua Spooner, Who Was Most Barbarously Murdered at His Own Gate...by Three Ruffians, Who Were Hired for the Purpose by His Wife, by Nathan Fiske. Rev. Fiske pulled no punches. Speaking over the "mangled remains" of Mr. Spooner, he said, "So premeditated, so aggravated, so horrid a murder was never perpetrated in AMERICA and is almost without parallel in the known world." Priced at $2,750.

Here is another interspousal murder trial from Massachusetts, though this one had a more favorable outcome for the defendant. The accused was the High Sheriff of Hancock County, Massachusetts (now part of the state of Maine). Moses Adams was not only the sheriff, but a respected physician in the town of Ellsworth. On May 12, 1815, Mrs. Adams' daughter, on returning from school, discovered her body. She had been brutally murdered with an axe, her jugular vein severed, her neck broken, a mortal wound on the back of her head. Dr. Adams was quickly arrested, based on testimony of several neighbors and friends as to his movements between the time his wife was last seen alive and the discovery of her body. He was placed on trial, which was described in this pamphlet, The Trial of Moses Adams, High-sheriff of the County of Hancock, before the Supreme Judicial Court of the Commonwealth of Massachusetts, on an Indictment for the Murder of his Wife from Minutes taken at the Trial by John Bulfinch. This is a second edition, from 1815. While some of the evidence may have tended to implicate Dr. Adams, it was not sufficiently conclusive to convict. Adams was acquitted. Apparently the townsfolk weren't convinced of his innocence and Adams moved away from Ellsworth to a more rural setting. Item 1. $650.

General George Armstrong Custer was noted primarily as an Indian fighter, a rather vain man whose overconfidence led to the Indians famously exacting their revenge. Less well known is that in the brief interregnum between his Civil War service and that in the West, Custer dabbled in politics. He considered running for office, but did not. However, in 1866, he accompanied President Andrew Johnson on a tour designed to support the President's plans for the South. It was essentially an all is forgiven position that did little to protect the former slaves. Item 41 is a broadside, from August 19, 1866, headed To the Soldiers and Sailors who Served in the Army and Navy of the United States During the Late Rebellion. It contains a list of over 200 veterans who approved it, including some other notables such as General Crook and Daniel Sickles, but it is Custer's name that leads the list. The broadside calls for full restoration of rights to the South, claiming, "The intention of Congress seems to be to deprive them of representation just so long as it suits the purpose of the Radical party." It called for a meeting of like-minded veterans in Cleveland. That led to the Soldiers and Sailors Union, a Democratic leaning Civil War veterans' group to compete with the larger, Republican leaning Grand Army of the Republic. Custer was named its head. It also had support from Confederate veterans, but never reached anything like the support of the GAR in the North. Some speculated that Custer's participation was based more on hoping for a promotion from President Johnson, but such was not forthcoming. $4,500.

Item 87 is the 1898 album volume (only) of photographs from an area very much in the news today. The title is Report from the Boundary Commission upon the Survey and Re-Marking of the Boundary Between the United States and Mexico West of the Rio Grande. The Boundary Commission was set up in 1882 to resurvey the U. S.-Mexican border from El Paso to San Diego. Two hundred fifty-eight monuments were constructed between 1891 and 1896. The photographs show these monuments and scenery along the border in the 1890s. I don't know whether Mexico paid for the monuments. $1,250.

Samuel Johnson is noted for creating the first comprehensive dictionary and for being a great wit, at least in the eyes of James Boswell. However, it is doubtful whether either of these made him very popular in America during his time. Item 64 is a scathing attack on the American colonists he published shortly before the American Revolution. The title is Taxation is No Tyranny; an Answer to the Resolutions and Address of the American Congress. This is a third edition from 1775. Of course, Americans know Johnson was wrong. Taxation is always tyranny. Johnson ridiculed the colonists, who he said "fled from tyranny to rocks and deserts" who "are now invaded by unprecedented oppression, and plundered of their properties by the harpies of taxation." Well, yes, we were. $1,500.