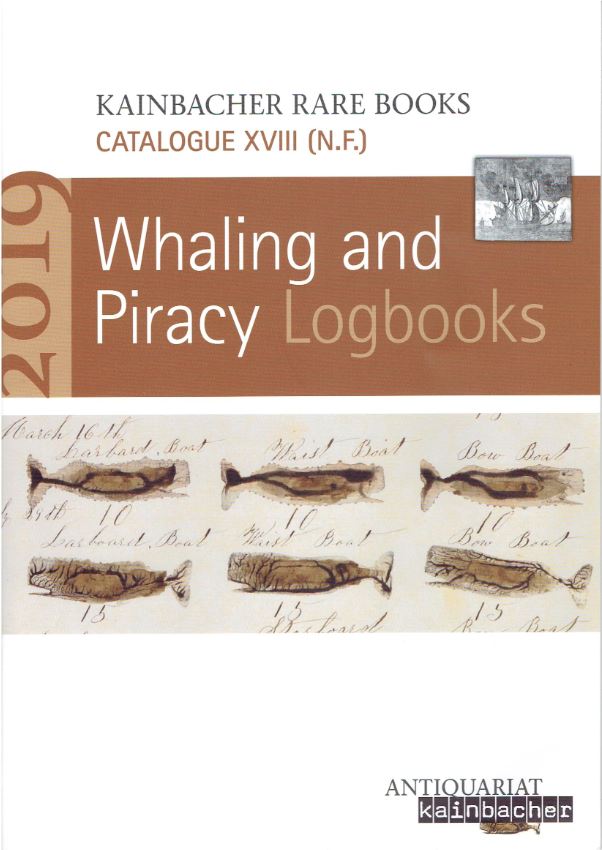 Antiquariat Kainbacher (Kainbacher Rare Books) has issued a one-item catalogue, a collection of Whaling and Piracy Logbooks. The focus here is on the whaling voyages of the mid-19th century. These were long and dangerous journeys. Skilled captains, with crews containing many adventurous young men, willing to risk it all for the excitement and financial rewards at the end of these journeys, went off to sea for years at a time. Most of these travels came from New England, Massachusetts in particular, and within Massachusetts, mostly the city of New Bedford. Of the 700 whaling ships sailing the seas in the 1840s, 400 called New Bedford their home.

It would not be unusual for these New England voyages to sail not only across the Atlantic, but to the far reaches of the Pacific, crews seeking grounds where whales had not been depleted by hunting. Likewise, it was not unusual for these voyages to take years, three or four at a time. That is a lot of time at sea, though they did find ports of call for some R&R and restocking supplies. Still, that was a long time away from home on something less than a cruise ship.

There was a time when New Bedford was called "The City that Lit the World." That takes us to the reason for these whaling ships. It was not because blubber was a delicacy in New England. It was for the whales' oil. People lit their homes at night with whale oil. It was not as pleasant as electric light, unless you are into fishy smells, nor was it as bright, but at a time when there wasn't much else available for lighting than a fireplace, whale oil was a valuable commodity. It spurred many a young man to make the long, treacherous journeys, just as petroleum oil would later draw other adventurous people to prospect the oil fields.

This was not a career that would last too long. By the middle of the 19th century, camphine, a combination of turpentine and alcohol, was replacing whale oil in oil lamps. A couple of decades later, kerosene, a product of petroleum, would prove a more economical source of lighting. By the latter part of the century, gas lighting would appear, offering a brighter light, and as the 20th century dawned, the electric light appeared. Meanwhile, New Bedford replaced its whale oil industry with textile mills, though in time, those too migrated away from New England. However, the ocean remains a major source of income for the city, New Bedford being a major port for the fishing industry today.

This archive consists of 12 logbooks of whaling voyages and one letter book from the Commander in Chief of the Jamaica Station at Port Royal, Jamaica. The dates range from as early as 1804 to as late as the 1880s. That first one is not a whaling voyage, but a transport from Amsterdam to Batavia, intercepted and condemned by the British for violating its neutrality rules of law. These actions would lead to Thomas Jefferson's 1807 Neutrality Act and eventually the War of 1812. The writer of this logbook, apparently one Jonathan Negusjin, then keeps logs on other journeys in which he participated through 1810. The latest log book records a four-year voyage out of New Bedford from 1880-1884, which brought back a large haul of oil, quite successful for so late a time.

Captain John H. Paun records a well-timed whaling voyage from New Bedford. It ran from Nov. 17, 1860 - September 8, 1864. That was a good time to be away from America. However, not even peacetime could entice Paun to stay on land. He was back out at sea in 1865, not returning until 1869.

Within the details about location and weather, we read about visits at various ports, interactions with natives, meetings with other ships, and in one case, the sinking of the ship. Often, there is much time with little to do but carve whale bones, particularly where whale sightings, or successful captures, were not common. There are occasional fights. Midshipman Thomas Jonson writes in 1834 of a crewman boarding "in liquor," and being violent, along with using "profane language." A sailor using profane language? He was bound to the rigging and lashed until he promised to do better.

The one book written on shore, the letter book from the Office of the Commander in Chief of Jamaica Station, comes from 1815-1816. This was a particularly eventful time. Much of the correspondence deals with British attempts to deal with pirates and privateers. It was the time of the great fire that devastated the city of Port Royal. The naval hospital at Jamaica Station was among the structures destroyed. It was also the time of the five-month Spanish blockade of nearby Cartagena, on the northern coast of Columbia. It had been taken over by rebels during the period when the Spain was overrun by Napoleon. With Napoleon's defeat, Spain again had the strength to regain control over its colonies. They succeeded in retaking Cartagena in 1815, though it would only be a few more years before they would be driven entirely from their South and Central American colonies.

The letter book recounts receiving Gen. Morillo, who led the siege of Cartagena, on December 2, 1815, at the conclusion of the siege. A letter the following month congratulates Gen. Morillo on his victory, but by February, the Commander is protesting to Gen. Morillo about the treatment of British subjects in Cartagena and demanding their release. A month later, an order is given to search for a Cartagenian privateer who had committed various atrocities. There was a letter concerning the evacuation of Curacao in 1816. After the Napoleonic wars, the British agreed to return the island to the Dutch as part of the Treaty of Paris. An order is sent out to Capt. Bligh to protect trade in the Gulf of Mexico. Alas, this is not the Capt Bligh of Bounty fame but George Miller Bligh. A letter is sent to the Governor of New Providence requesting naval protection of the island against Black troops who showed a desire to revolt. Another letter reports on efforts to pursue pirates who had taken the Sarah Schooner and inhumanely murdered its crew.

The price for this archive of log and letter books is available on request.