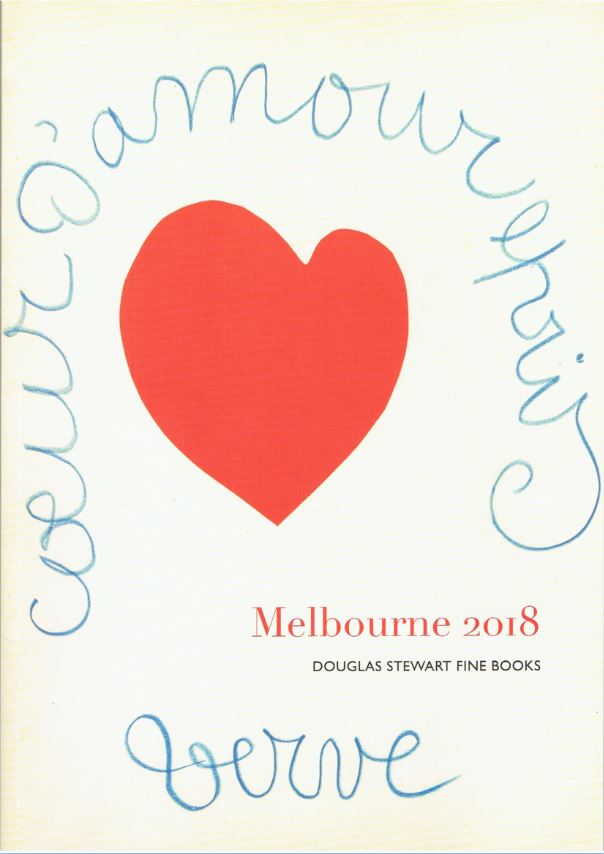 Douglas Stewart Fine Books published a catalogue for Melbourne 2018. That was the book fair recently held in Melbourne, Australia. Naturally, there is much that would be of interest to an Australian collector, but this is not a catalogue of Australian material. Historic material covers a wider range, mainly Asia and the Pacific. Other items, particularly in the arts, extend to Europe and America (such as The Philosophy of Andy Warhol). This is a varied and fascinating catalogue, one easy to appreciate. Here are a few selections.

We begin with one of the earliest European travelers to Asia. Marco Polo headed east from his home in Venice with his father and uncle in 1271. He did not return until 24 years later. Item 2 is the third Spanish edition of his travels, Libro del famoso Marco Polo Veneciano... published in 1529. His travels took him through Arabia, the Holy Land, Turkey, Persia, China and Tibet. His account, for the first almost two centuries available only in manuscript form, was for years the only reasonably reliable source of information for Europeans on this part of the world. Conflicts on the Italian peninsula led to Polo being imprisoned until 1299, affording him time to write his account. This edition was translated by Rodrigo Fernandez de Santaella, who has included the account of 15th century traveler Nicolo Conti, who visited some of the same lands. It also contains Santaellas Cosmographia. Santaella had concluded very early on that the East and West Indies were separate lands, not the same one approached from different sides. He so concluded based on differences between natural resources and the environment of the two places. He also believed that "Antilla" was a corruption of "Antindia," meaning the opposite of India. Priced at AU $220,000 (Australian dollars, or approximately $157,840 in U.S. dollars).

Next we have a study of the fruit that led to the most famous sea mutiny in history. It was not the breadfruit's fault. Item 9 is Vom Brodbaum (on the breadfruit) by Georg Forster, published in 1784. Forster and his father were naturalists on Captain James Cook's second voyage. The breadfruit was a food staple on the Pacific islands, and naturalist Sir Joseph Banks had brought samples back to Britain on Cook's first voyage. This is a first edition, printed for private distribution in Kassel (Cassel, Germany) where Forster was a professor of natural science. As such, it is quite uncommon. Back in England, Banks had concluded that the large breadfruit would be a great source of food for the slaves in the Caribbean. Banks successfully promoted a mission by the Royal Navy to gather some breadfruit trees in Tahiti and transport them to the Caribbean. Placed in charge of that mission was William Bligh, commander of the not so good ship Bounty. You know the rest. AU $8,500 (US $6,106).

Talk about mutinies, this one made the one on the Bounty look like fun. Technically, this was not a sea mutiny. It occurred on land, after the shipwreck of the Batavia. It did result in the publishing of the first images of Australia, but the price was hardly worth it. Here is the terrible story. The Batavia was headed for Batavia (today Jakarta), but was off course when it was wrecked off the western Australian coast in 1629. Forty of the passengers drowned, but around 300 made it to the shore of a couple of islands. It was an inhospitable site, with little fresh water available. Commander Francois Pelsaert and a few of his men headed for the Australian coast, hoping to find water. They found a dry desert. Realizing the potential for disaster, Pelsaert decided to take the longboat and head for Batavia. It took them 33 days, but the commander was able to secure a rescue ship, with which he rushed back to the location where the survivors were stranded. What Pelsaert found when he returned was beyond shocking. The man he had left in charge, Jeronimus Cornelisz, and his band of mutineers, had initiated a reign of terror on their fellow survivors. Over 110 men, women, and children had been murdered by the mutineers, the women made into sex slaves. Cornelisz quickly killed anyone he feared might be a threat to his rule. Fortunately, when Pelsaert returned, a few of the survivors, left on an island to die, reached him first and told the commander the grisly news. Justice prevailed. The worst of the mutineers were tried, tortured, and executed on the spot. Cornelisz had his arms cut off with a hammer and chisel before being hanged. Two of the mutineers were dumped off on the Australian mainland, never to be heard from again. Others were returned to Batavia for trial. Pelsaert's book, Ongeluckige voyagie, van't schip Batavia, nae de Oost-Indien, not only recounts this horrific tale, but includes drawings of the west Australian coast, the first European images of Australia. This is an extremely rare first edition, published in 1647. Item 4. AU $400,000 (US $287,360).

Item 36 is a photograph album from the maiden voyage of the German warship SMS Bismarck in 1879-1880. The photographs document visits to Patagonia, Samoa, Tahiti, Rarotonga, Tonga, Fiji, Sydney, Peru, and the Falkland Islands. The photographer was Claus Franzen, and while Stewart has been able to locate many others of his photographs, they have not found a comparable portfolio to this. This one was given to Chancellor Bismarck himself, possibly by the ship's captain when he personally visited with Bismarck on December 26, 1880. The Bismarck was primarily employed during the 1880s during the colonization of Africa. The Bismarck was decommissioned in 1888, and though an overhaul was planned, that plan was abandoned. She then served only as a barracks ship until broken up for scrap in 1920. It should be noted that this was not the same ship as the battleship Bismarck of "Sink the Bismarck" fame, sunken off the French coast during World War II. AU $42,000 (US $30,193).

Item 38 is an archive of material relating to the Swedish Antarctic Expedition of 1901-1904. The highlight is an unpublished manuscript by the expedition's meteorologist and hydrographer, Gosta Bodman. It also contains 270 pages of letters Bodman wrote, his journal, and 50 photographs taken on Snow Hill Island, where six of the men were stranded for two years. The mission was a reasonable success in terms of information gathered, but the price was many hardships suffered. Bodman's account describes his observations concerning the environment, descriptions of his companions, his scientific findings, and the harsh living conditions and ordeal they endured. They had planned to spend a year on Snow Hill Island, but ended up there for two when the main ship, which was to pick them up, sank. Antarctic winters are not pleasant. Finally, they were rescued by the Uruguay, a rescue ship sent by Argentina. There is also a letter from Bodman to his mother written from the Uruguay. AU $85,000 (US $60,991).