The Slave Trade from Maggs Bros. 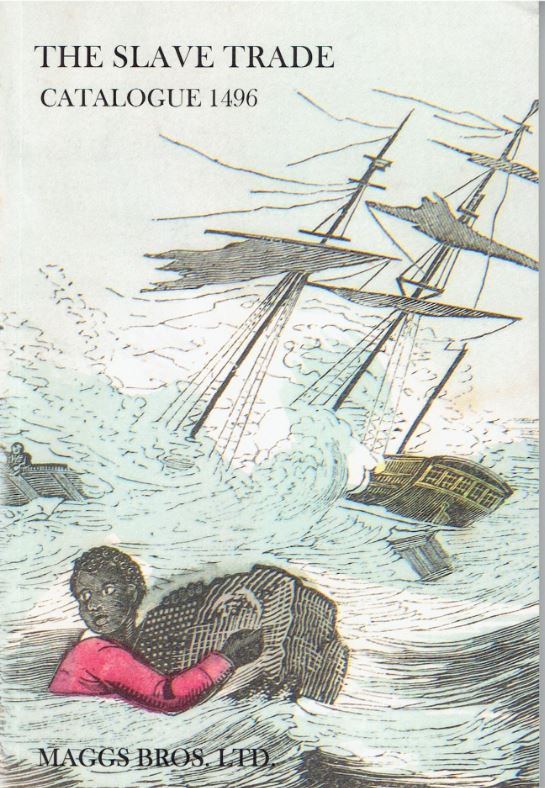 Maggs Bros. Ltd. is offering a catalogue on The Slave Trade. It was ugly, Europeans forcibly taking people from their homeland to be overworked and brutalized, justified by their need for sugar and the claim that this was appropriate for people not "civilized" like themselves. While the system was created by European nations, the legacy mostly still haunts America. America did not create slavery, but continued to permit it long after its founders, Britain, France, Spain, outlawed it. Whereas the Europeans ended it peaceably, it took America going to war with itself to end the abomination. Here are some of the items concerning this horrible trade and institution, including those from some of the people who took the moral stand against it.

The British are generally held accountable for the existence of slavery in America, but the French permitted it in their possessions as well. Item 3 is Le Code Noir ou Edit du Roy... dans la Province & Colonie de la Louisianne. This is the French Black Code, which regulated slavery in French colonies. It was first issued in 1685, but applied only to the Caribbean. This version, enacted in 1724, applied the code to Louisiana. In those days, Louisiana reached all the way to the Canadian border and the American Northwest, but slavery was only present in its southern reaches, including today's Louisiana and Mississippi. It states that slaves cannot gather in crowds, carry weapons, or own property. Slaves who struck their masters and drew blood were to be executed. Owners would be compensated from a slave tax. On the other hand, masters who tortured or mutilated their slaves were only punished by having their slaves confiscated. They were also subjected to fines if they kept their slaves as concubines, unless they married them. Runaway slaves were to have their ears cut off and be branded on the shoulder. The code noir also had punitive clauses for other groups. All Jews were to be expelled from the colonies and slaves of non-Catholic (Protestant) masters could be confiscated. The first African slaves were brought to Louisiana in 1719. This printing, the first separately published code noir and the first applied specifically to Louisiana, was published in 1727. Priced at £12,500 (British pounds, or approximately $15,993 in U.S. currency).

Next we have a first edition of a work described as "among the best and most successful examples of abolitionist rhetoric produced in the years leading up to the establishment of a formal abolition movement." The author was Ignatius Sancho, sort of an earlier, British version of Frederick Douglass. Sancho was born a slave, born on a slave ship. He was taken to New Granada, today northern South America. After his mother died and his father killed himself rather than be a slave, Sancho was taken to England at the age of two. He worked for three sisters, but the Duke of Montagu was impressed by his intellect and provided the young man with books. Sancho later escaped the sisters and settled with the Duke's family. Sancho became a literary critic and correspondent, his opinions highly valued. Sancho would later become a successful grocer while corresponding with some of the great artists and writers of the day. While he was not out giving speeches and agitating like Douglass, his letters revealed his support for his enslaved fellow Africans and belief that all persons should be honored and treated equally, regardless of race or religion. After his death, his friends collected Sancho's letters, and in 1782 published the Letters of the late Ignatius Sancho, an African. This book would become an inspiration for the budding abolitionist movement as it showed that Africans had the same capacity for intellectual accomplishment as whites if given the same opportunities, rather than treated as less-than-human property. Item 7. £4,000 (US $5,103).

Item 11 is a hand-colored engraving titled British Humanity or African Felicity in the West Indies. The title is meant to be ironic. It is followed by the explanation, "This Plate being a slight Sketch of the Inhuman Punishments inflicted on the Miserable Slaves is taken from an original drawing of a Wipping in the Market Place in the Island of Grenada done upon the spot by the late H. Smeathman Esq." Henry Smeathman was a naturalist who spent several years in the 1770s collecting specimens, primarily on the Banana Islands, just off the coast of Sierra Leone. On his way home, his ship was waylaid by an American vessel during the revolution. He instead ended up spending four years in the Caribbean, whose climate he found similar to Sierra Leone. It was there that Smeathman observed the reality of slavery. Interestingly, though sent on his naturalist studies by anti-slavery Quakers, Smeathman befriended and relied on people in the slave trade for assistance in Africa. Nonetheless, this image shows that he was affected by what he saw. On returning to England, Smeathman was involved in setting up a colony for British Africans in Sierra Leone, to be a place where they could live better than in England. Britain was a less than welcoming host to loyalist American slaves who accompanied British troops out of the country when they lost the war. However, Smeathman died before the colony was established. The caption below Smeathman's image reads, "The Slaves both Male & Female are fastened to four Stake's in the Ground, and lashed till they are hardly able to walk without Assistance. This shocking sight is so common that although it is executed in the Public Market Place, the People buy & sell as though nothing was doing." £5,000 (US $6,385).

Slavery was abandoned in Britain in the 18th century, and the nation outlawed the slave trade in 1807. However, slavery continued in the colonies, primarily those in the Caribbean, until finally outlawed in 1833. Item 56 is a copy of the debates in the House of Lords, the most reluctant of bodies to accept that abolition was at hand - West India Colonies. Debate in the House of Lords, April 17th, 1832. The Lords recognized the strong abolitionist sentiments in the nation, but some members expressed concern for merchants and colonists who made their living off the labor of the slaves. Lord Suffield spoke clearly of the appalling cruelty of slavery, and notes, "Is it not an indisputable position that every system, founded on cruelty and injustice, must fail?" £375 (US $477).

Item 74 is an apparently unrecorded song sheet concerning the only American execution of a slave trader under the Piracy Law of 1820. It came in 1862. The one and only was Nathaniel Gordon, who filled his ship with almost 900 slaves, mostly children, in 1860. He was captured by an American ship off the African coast and taken to New York for trial. After a first trial ended in a hung jury, Gordon was convicted in the second and sentenced to be hanged. His friends appealed to President Lincoln for a pardon, but all the President would give him was a two-week stay to get his things in order. Lincoln was noted for his mercy in pardoning people, but the monumental cruelty of Gordon's crime was more than he could take. This song sheet is headed The Slaver Gordon, His Dying Soliloquy. This soliloquy probably paints Gordon in a more favorable light than he deserves. It makes him out as a greedy person, but also one consumed by guilt. His conscience should have kicked in a little earlier. £500 (US $635).