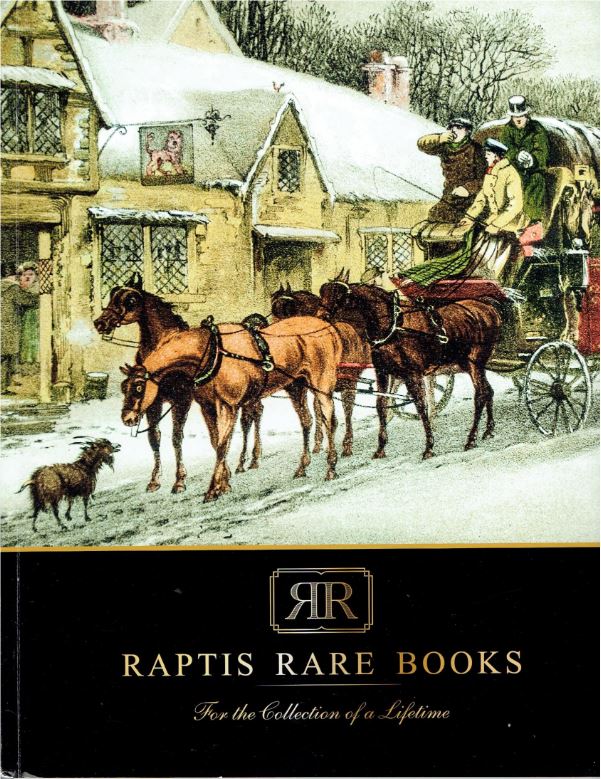 Raptis Rare Books recently published a new catalogue. While it does not carry a title, the cover illustration implies this is a holiday or winter catalogue. If it's a little late to be buying gifts for others, it is never too late to buy one for yourself. Raptis features fine and important books for the serious collector in a variety of fields. The subjects listed for this catalogue are Literature; Children's Literature; History, Philosophy & World Leaders; Americana; Travel & Exploration; Sports & Leisure; Economics & Finance; and Art, Architecture & Photography. Here are a few selections.

We will begin with a book appropriate for winter. This is the limited, deluxe edition of Antarctic Days. Sketches of the Homely Side of Polar Life by Two of Shackleton's Men: Introduced by Sir Ernest Shackleton, published in 1913. This is copy #205 of 280 printed, and is signed by Shackleton and his two men, the authors, James Murray and George Marston. Shackleton may not be quite as well remembered as other explorers with the most notable of firsts, such as those to first reach the poles. However, Shackleton was likely the most important of the early Antarctic explorers, his multiple expeditions bringing back a wealth of data. Shackleton highly recommended this book for those seeking "to get to the kernal of life of a polar explorer." As he explained, unlike the official reports, this unofficial account afforded the authors more leeway to focus on the personal side of life on an expedition to a land of extremely harsh climate. It also allowed them to tell the story in an entertaining, even jocular manner. Item 93565. Priced at $9,500.

Perhaps something warmer might be more appealing during the middle of winter. The Strip in LA is always pleasant, no matter the season. Item 93546 is Every Building on Sunset Strip, by Ed Ruscha. Ruscha is a photographer, and this book contains photographs quite literally of every building on Sunset Strip, at least as it was in 1966. Ruscha drove down the strip photographing every building on one side, and back photographing them all on the other. The book displays the buildings on Sunset Strip, all one and one-half miles of them, on a 27-foot long accordion-folded page. One side of the strip runs along the top half of the page, the other side on the bottom half. $6,000.

These are difficult times, so perhaps it is a good idea to look to advice from a previous hard time, the Great Depression. Item 92782 is the rare first book by Eleanor Roosevelt, It's Up to the Women, published in 1933. The new first lady writes that women know the needs of life must be met and how to proceed to do what must be done. "[I]t is their courage and determination which, time and again, have pulled us through worse crises than the present one," she writes. This is a signed copy of the limited first edition, #21 of 250. $3,800.

Maybe this book isn't so far out as it once seemed. This is the most notable of time travel books, a subdivision of the category now known as science fiction. However, with recent developments in physics, and the whole concept of space time, and the influence of factors such as speed and gravity on time, maybe time is just another dimension through which we can travel. Item 92435 is a first edition, first issue of The Time Machine by H. G. Wells, published in 1895. It is a story of an inventor who devises a machine which takes him into the future, only to find an earth and species that have, perhaps, more degenerated than advanced. It is probably not what we would find if we could travel through time, but who knows? $5,500.

Robert E. Lee quickly came to terms with the South's defeat in the Civil War and moved on. Jefferson Davis never did. He fought to justify the "Lost Cause" long after it was lost. Item 95098 is Davis' The Rise and Fall of the Confederate Government, published, ironically, in New York in 1881, 16 years after the war ended. Herein, Davis argues for states' rights and the legitimacy of secession. He minimizes the significance of slavery as the cause of the war. Davis maintains that the slaves were happy in their condition and it was the abolitionists who caused them to attack their "benefactors," the slave holders, and turn them away from their happy lives. Sure. $3,800.

Next is a look at world history from an Indian viewpoint. Jawaharlal Nehru was educated in the West, but was also an Indian nationalist and leader of its independence movement. He was more the political leader to Gandhi's spiritual leadership. In 1930, he was imprisoned for leading a civil disobedience campaign against the British salt tax in India, then a British colony. While in prison from 1930-33, he wrote 196 letters to his teenage daughter, Indira Gandhi. They were collected in this book, Glimpses of World History, two volumes published 1934-35. Unknown if not unimaginable at the time, both father and daughter would be long-serving prime ministers of India after independence was gained. Nehru served from independence in 1947 until his death in 1964. Indira Gandhi served as Prime Minister from 1966-1977 and again from 1980-1984, when she was assassinated in office. Item 89875. $5,000