European Antiquarian Works (and a few others) from Zinos Books 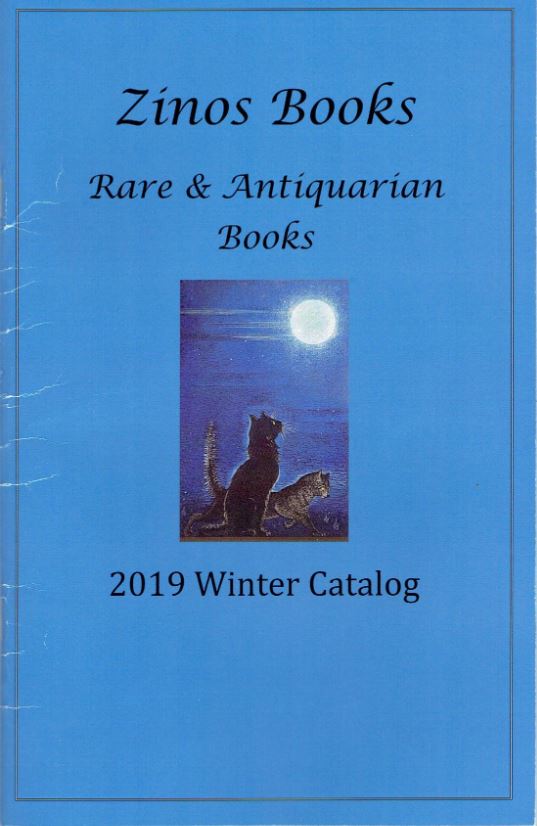 Zinos Books has issued their 2019 Winter Catalog of Rare & Antiquarian Books. Zinos' catalogues are not topic specific, but are broken down by century. Centuries from the 16th-21st are represented. However, the number of items skew to the earlier centuries, these being primarily antiquarian books and works on paper. Works are primarily European in origin with various languages represented. There are many pronouncements of various sorts issued by the Catholic Church, which appear to be exceedingly rare to be found, some from the contentious era of the Reformation. Here are a few items we found in this latest selection from Zinos.

We begin with an interesting title, A Treatise concerning Enthusiasme, As it is an Effect of Nature: but is mistaken by many for either Divine Inspiration, or Diabolical Possession, published in 1655. There's no need to feel concerned about being enthusiastic. "Enthusiasm" in those days referred to possession by some sort of spirits, not merely being excited in a positive way. In this book, Meric Casaubon distinguishes between true possession by spirits, whether divine or diabolic, and the enthusiasm that anyone may feel without the assistance of such outside forces. The latter may arise from someone's emotional state, perhaps delusions or hallucinations, or too much drink, but not from literal possession. Item 31. Priced at $1,000.

Item 18 is a papal bull, originally issued in 1567 by Pope Pius V. The title is Lecta in die Coenae Domini, published in 1577. Archbishop of Milan Charles Borromeo had it republished annually. This was the time of the Reformation, which by then had spread to much of Europe. Both Pius V and Borromeo were known as reformers within the church, counter reformers without. They were no-nonsense, orthodox personalities, honest if not always great fun. This papal bull is quickly to the point, excommunicating various Protestant groups, such as Lutherans, Zwinglians, Wycliffites, Anabaptists, and Huguenots. It also censured other people, bad, though perhaps not as bad as Protestants, such as pirates and Christians who sold their services as mercenary soldiers to the Turks or other Muslim nations. $750.

This next item also ties Pope Pius V to Charles Borromeo over another controversial group. Item 17 is a Papal Order, Extinctio Ordinis Fratrum Humiliatorum, published in 1571. That translates to order of extinction for the Humiliati. The Humiliati was a religious order formed in the 12th century. They adopted a simple lifestyle, as typical for such orders, but had an uneasy relationship with the Church. Nonetheless, they developed many followers, though actual membership was small, and built many churches. By the time of Pius V, they had become a bit too independent, and perhaps less humble. In 1569, Pius sent Charles Borromeo out to address the abuses and bring the order under control. His severe attitude did not sit well with the Humiliati. One of their members attempted to assassinate Borromeo. With that, Pius V issued this edict, suppressing the order. That was the end of the Humiliati, at least the male membership, though an associate group of wives of the male Humiliati continued in existence until the early 20th century. $1,750.

Item 16 offers a rare text of Dante's Divine Comedy along with valued commentary. The title is Dante con l'espositione di M. Bernardino Daniello da Lucca, sopra la sua Comedia dell'Inferno, del Purgatorio, & del Paradiso, with the commentary coming from Italian literary critic and sometimes poet Bernardino Daniello of Lucca. The commentary was described by a couple of 19th century scholars as "highly esteemed" and "witty and useful." This is a first and only edition. Sales were limited by the belief that Daniello stole some of his commentary from his mentor, Trifon Gabriele. This copy, like most, is missing a few stanzas from the Sixth Canto of Purgatory. The printer left them out. $3,500.

Next is a biography of an archpriest who lived in the 16th to early 17th century. He is revered as a martyr to the Catholic faith. Nicolo Rusca lived in Switzerland near the Italian border. It was an area with both Catholics and Protestants, sometimes living in tolerance of each other, sometimes not so much. Rusca was basically a humane and tolerant person, but was concerned the rise of Protestantism would be harmful to the Catholic Church. As such, he became a target of the most radical of Protestants. He was tried, but acquitted of breaking the rules of religious tolerance in 1608. His enemies came back at him in 1618, when he was seized by soldiers, falsely accused of committing violence against Protestant pastors, convicted, tortured, and killed. This was all a long time ago, but the story continues to the present. In the twentieth century, his cause was advanced by both Pope Pius XI and John Paul II. In 2011, Pope Benedict XVI declared him a martyr, and in 2013, Rusca was beatified on behalf of Pope Francis. Item 27 is Martyrium B. Memoriae Nicolai Rusca archipresbyteri... by Ricardo Rusca, published in 1620. Nothing is known about Ricardo Rusca, but it seems likely he was a relative. $750.

We will switch faiths for this next book. Item 24 is Opera Philonis Iudaei exegetica in libros Mosis... by Philo of Alexandria, published in 1614. While this is an early printing of Philo's commentaries on the Book of Moses, it is not contemporary, Philo having lived in the first century. He was a leader of the Jewish community in Alexandria. His views were not universally accepted as he was not a biblical literalist. While he believed the Bible was the source of all truth, he believed that many of its stories were allegorical rather than literal history. $500.