A Miscellany from Ursus Rare Books 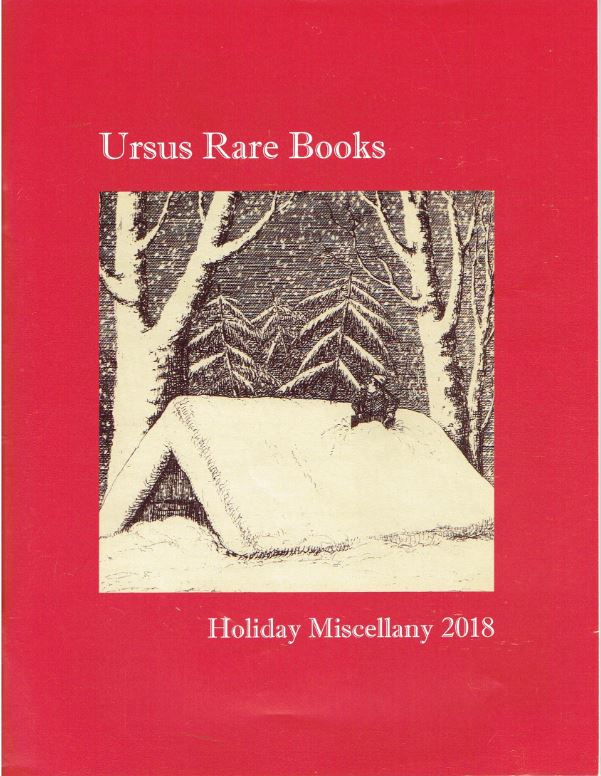 Ursus Rare Books recently issued a Holiday Miscellany 2018. We may be at the tail end of the holiday season now, but the books are still rare and collectible. They will serve equally well as gifts to start the new year. These are a few of the items we found.

We begin with a photographic classic, Paris de Nuit, a look at Paris at night. It was published in late 1932, the heart of the Depression, a difficult time for people everywhere. The photographer was Brassai, who emigrated from Hungary and spent the remainder of his life in France. The text was provided by Paul Morand. Brassai wandered the streets at night, capturing some of the seedier sides of Paris. He has photographed deserted squares, darkened gardens, ladies of the night plying their trade, smoke-filled bars and cafés. Brassai also befriended an upper class family, so his photography shows the other side of Paris life as well. This book has often been reprinted, but it is hard to find a first edition in collectible condition any more. Item 3. Priced at $4,750.

Next is a statement of principles promulgated by the United States and Britain, later adopted by other allies as well, resulting from a meeting between President Franklin Roosevelt and Prime Minister Winston Churchill. The two secretly met in Newfoundland in August of 1941. The Second World War was raging, and Britain bore the weight almost alone. It would not be until later that year, with the bombing of Pearl Harbor, that Roosevelt would finally be able to convince Americans to join the battle on the British side. The parties set down eight principles, including that the parties did not seek any territorial gains from war, boundary changes needed the approval of those living there, all people should have the right to self-government, there should be free trade among nations, there should be peace and freedom of movement among nations, and improved living standards available to all. Today, this statement is known as the Atlantic Charter, though it was not so known at the time, nor was this printing from the Office of War Information in Washington published until 1943. It appears on a large broadside. Item 9. $675.

Here is an ode to American business, One Hundred Years of American Commerce, by Chauncey M. Depew, published in 1895. It consists of 100 articles on various American businesses, with portraits and facsimile signatures of the writers. Interestingly, if the writers themselves are not always well remembered, their names often are as they are synonymous with the company name. There is a discussion of powder and explosives from Francis DuPont, flour by Charles Pillsbury, publishing by John W. Harper, brewing by Fred Pabst, tobacco by Pierre Lorillard, soap by Samuel Colgate, musical instruments by William Steinway, and jewelry by Charles Tiffany. Item 13. $1,250.

This one may not go down in the annals of great literature. It is short, irreverent, and very funny. It was the first book by Groucho Marx, known more as an actor than writer. Still, it features much of Marx's typical deadpan humor, the topic being the same as the book's title - Beds. Marx is able to find many jokes centered around this sleeping apparatus. This is a first edition, published in 1930. The cover shows Groucho in a nightgown, candle in hand, and trademark cigar between his teeth, standing in front of a bed. Item 39. $2,250.

Here is a book that will appeal to Chevy aficionados. It is a 1956 dealer's showroom sample catalogue for the 1956 Chevrolet. It contains 136 pages, with 200 color illustrations, diagrams, and 37 printed sample paint color combinations. This was the era when two-tone colors were popular on cars. There are also 78 interior upholstery samples on vinyl and cloth. Ursus notes that this was the year Chevrolet began using its famous advertising jingle, "See the U.S.A. in your Chevrolet." Item 8. $3,500.