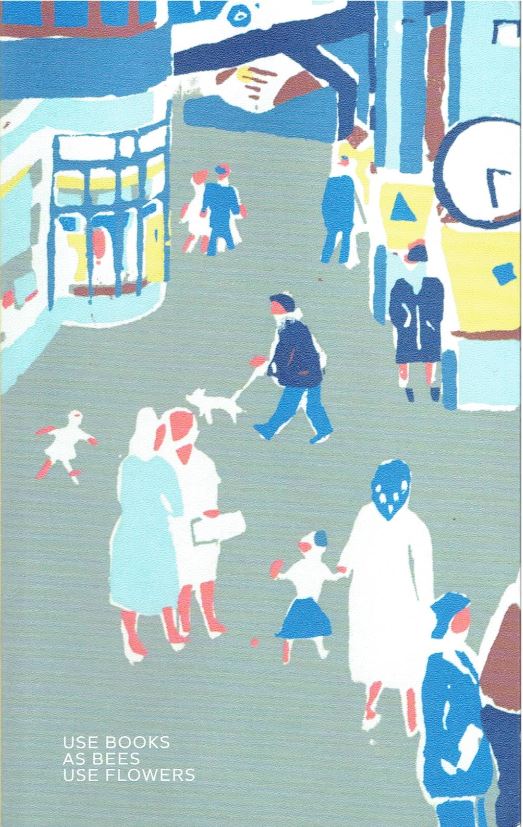 Honey & Wax Booksellers has released their seventh catalogue. It is untitled and undescribed, which makes it a challenge to provide a reasonable description. I am not up to the challenge. I will just say it is a variety, an eclectic variety of items that are hard to categorize. So, we will proceed inside and list a few of the books or other items we found inside that you may find interesting.

The three "Bell" sisters started as just about the most unsuccessful authors ever. Charlotte, Emily, and Anne Bronte published a book of poetry in 1846. Fearful that women authors would not be well accepted, they used the names Currer, Ellis, and Acton Bell. They figured those to be gender uncertain names. That book of poetry sold an estimated 2 copies. Perhaps if they had used their actual names they only would have sold one? They didn't give up, at least not on writing. They turned to novels instead of poetry, and each soon achieved success. Charlotte Bronte's success came with Jane Eyre. An Autobiography. Edited by Currer Bell, published in 1847. Even then, she was still using the name "Currer Bell." It was into the third edition the following year before the author's true identity was revealed. Item 46 is the three-volume first edition, complete with publisher's advertisements dated October 1847. Priced at $40,000.

Henry Highland Garnet was a minister, orator, abolitionist and American diplomat. He was also an escaped slave, running away with family members at the age of 9. His father enrolled him at the African School in New York, an education that led him to the pulpit. He spoke eloquently in favor of abolition, using the Bible to support his views. However, he did become estranged from Frederick Douglass and some other leaders of the movement because he favored the colonization of Liberia by African Americans, believing they would be better off in a place where they could control their own destiny. As such, he was a founder of the African Civilization Society, a pro-emigration organization run by black Americans. During the Civil War, Garnet was a strong supporter of the use of black troops to fight for the Union. When the government finally approved of black troops, Garnet was an active recruiter and moral supporter of the troops. As a result of his pro-Union activities, Garnet was invited to speak before Congress. Item 14 is A Memorial Discourse by Rev. Henry Highland Garnet, Delivered in the Hall of the House of Representatives, Washington City, D. C. on Sabbath, February 12, 1865. This was the first address delivered to Congress by an African American. This copy contains the ownership signature of Lottie Wilson Jackson, one of the few African American members of the National American Women's Suffrage Association. She attempted, without great success, to get that organization to oppose the Jim Crow laws of the era. $4,500.

Today, we send out prepackaged Valentine cards to show our affection. They contain some trite pledge of undying love, written by a copywriter and printed off a press. There was a time when Valentines were more personal. Item 4 is The Gentleman's Love Feast: A New and Complete Original Valentine Writer, Consisting of a Collection of Amusing and Affectionate Epistles, Suited to Various Conditions and Circumstances, published in London in 1822. This is a book filled with verses you could copy on a card to prove your love and devotion. These were no one-size-fits-all verses as found on today's Valentine cards. These were words written to show heartfelt emotions in accordance with one's particular line of work. For example, there are words for a bookseller, florist, gardener, butcher, musician, servant, and fishmonger among others. The baker could tell his love, "I roll in love, indeed I do, Until my heart is soft as dough; It late was hardened to a crust; But to cupid yield we must." Perhaps that sounded romantic in 1822. In defense of those who used such books to express their emotions, it must be remembered that few people were well educated in that day, so that original words to express feelings might have been difficult to come by. Item 4. $2,800.

Item 9 is a scrapbook of original notes taken by Horace Traubel during his interviews of Walt Whitman in 1888-1889. Whitman, who died in 1892, was around 70 years old at the time. Traubel, forty years younger, became close friends of the poet in the latter years of his life in Camden, New Jersey. Traubel wrote poetry himself, and was noted for literary criticism and as publisher of a literary journal. He was a great admirer of Whitman, and looked after his friend in those last years, as his companion, secretary, and nurse. Traubel carried on daily conversations with Whitman and kept extensive notes of them. They formed the basis of his nine-volume set, Walt Whitman in Camden. These notes were cut and pasted into a scrapbook of 39 pages, captioned and dated. Traubel gave it to his friend, William Gable, as a Christmas gift in 1910. There is also a letter from Traubel to Gable from 1917 included. In these pages, Whitman reminisced about his past, speaks of his contemporaries, and adds thoughts about the direction of the world. Traubel's notes quote Whitman as saying, "not Phila alone, Camden alone, even New York alone, but all together - all nations - the globe - intercalation - fusion - no one left out!...Solidarity is the future." Those are comments worth considering in this era of nationalism and divisions among people. $8,500.

Here is another poet, not as well known for her poetry as her her advocacy writing on behalf of America's natives. Nonetheless, Helen Hunt Jackson was an admired poet in the 1870s, who published her poems in periodicals. Ralph Waldo Emerson included her poems in an anthology and read them aloud on occasion. She was a classmate of Emily Dickinson and the two corresponded throughout her life. Item 26 is an 1880 edition of her book, Letters from a Cat. Published by her Mistress for the benefit of all Cats and the amusement of little Children, first published in 1879. This is Jackson's lighter side. However, 1879 was the year Jackson went to hear a lecture by Chief Standing Bear, and it so moved her, she spent the remainder of her life devoted to correcting the injustices America's natives had endured. She spelled it out clearly in A Century of Dishonor (1881). She sent a copy to every member of Congress. However, she determined that she needed to make her case to the public in a form that would greater interest them, so she wrote a novel, Ramona (1884), which showed some of the injustices suffered by Indians in a form more accessible to people who read primarily for entertainment. Ramona was a huge success, bringing her message to many readers, but Jackson died the following year before having a chance to push much further toward her goals. $600.