Hans Meyer and the Conquering of Kilimanjaro from Antiquariat Kainbacher 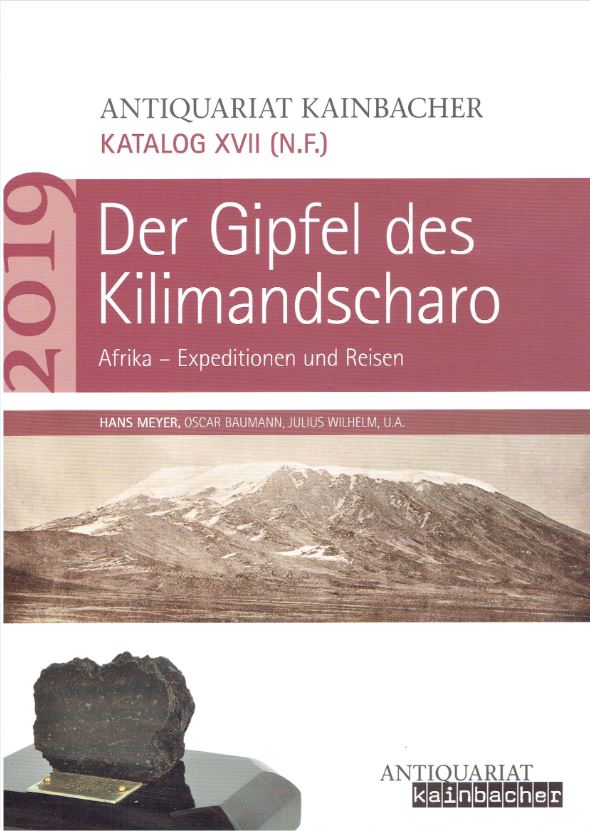 The ascent of Kilimanjaro.

Antiquariat Kainbacher has issued a catalogue entitled Der Gipfel Des Kilimandscharo Afrika – Expeditionen Und Reisen Hans Meyer, Oscar Baumann, Julius Wilhelm (The Summit Of Kilimanjaro Africa - Expeditions And Travel, Hans Meyer, Oscar Baumann, Julius Wilhelm). This catalogue is written in German. The catalogue focuses on the assaults on the summit of Mount Kilimanjaro in the late 19th century. Kilimanjaro is the highest peak in Africa, standing at over 19,000 feet. While British mountaineers were noted for their attempts, and finally success conquering Mt. Everest, it was German and Austrian climbers who took on the challenge of Kilimanjaro. Meyer would make it to the top on his third attempt, in 1889.

Hans Meyer was a director of a publishing house. He came to that position because his father was its owner. Meyer was a geographer and adventurer, his position in the publishing business providing the funds necessary to support his missions. Those trips took him to the Americas, India and Africa. It also enabled him to make his three attempts at the summit, in 1887 and 1888, before achieving his goal in 1889.

The major item offered in this catalogue is a large archive of material from the estate of Hans Meyer. Among the many items in this archive is a manuscript of the "Summit of Kilimanjaro." There are 48 letters written to his parents during world tours from 1881-1883. Seventeen more letters to his parents come from Meyer's 1887 trip to Africa. Next are another 13 letters from his second attempt on the mountain with Oscar Baumann in 1888. Then there are 12 more letters to his parents from 1889, when Meyer and Ludwig Purtscheller became the first Europeans to scale the mountain all the way to the top.

There are many more letters post-ascent from Meyer, some to his parents, others to his wife. He continued to travel in the decades following. Another set of 10 letters come from his fourth trip to Africa in 1898, with Ernst Platz, to further investigate Kilimanjaro. In 1903, he is off to study volcanoes in Equador. He is back to Africa, this time Rwanda and Burundi, in 1911. There is a handwritten manuscript by Meyer concerning this trip. There are other letters, manuscripts and typescripts, telegrams and photographs in this archive. There are also letters written to him. A total of 124 letters containing 576 pages written by Meyer are included. Price on request.

Antiquariat Kainbacher offers two books by Meyer separately. One is Zum Schneedom des Kilimandscharo. 40 Photographien aus Deutsch-Ostafrika mit Text (To the snow dome of Kilimanjaro. 40 photographs from German East Africa with text). Kainbacher describes this book as a great rarity, and by far the rarest of Meyer's works. It was published in 1888, so we know Meyer had not yet succeeded in making it to the top. It recounts his first attempt, in 1887. Meyer proceeded to the snow dome, also known as Kibo, a volcanic cone at the base of the mountain. Even that was a hike, but Meyer realized they were not adequately equipped for the depth of snow they faced, so he had no choice but to turn back. Priced at €12,000 (euros, or approximately $13,627 in U.S. dollars).

There are also some selections in the catalogue relating to Oscar Baumann. Baumann was an Austrian explorer and cartographer, who made several trips to Africa. Most notably for this catalogue, he hooked up with Meyer on his second attempt to climb Kilimanjaro in 1888. They ran into difficulties that had nothing to do with the weather. They were trapped in the Abushiri revolt. Natives of the region, led by wealthy planter Abushiri ibn Salim al-Harthi, were protesting the grant of the region to Germany by the Sultan of Zanzibar. It was not a great time to be German or Austrian explorers in the area. Baumann and Meyer were captured and only released after a substantial ransom (the equivalent of €8,500) was paid to Abushiri. Ultimately, Abushiri proved ahead of his time in revolting against European colonial rule. He was captured by the Germans and hanged. Offered is a collection of letters from Oscar Baumann, his parents, Josephine and Heinrich Baumann, and Hermann Meyer, Hans Meyer's father. Baumann thanks Hermann Meyer for expressing concern to his own parents during their difficult time in 1888. He later sends the senior Meyer a congratulatory postcard when his son successfully climbs Kilimanjaro the following year. There are three letters from Hermann Meyer to Bauman. There are several letters from Oscar Baumann's parents to Hans Meyer's father from the time their sons were in danger. There are also several letters from Josephine Baumann to Hans Meyer from 1899. In 1896, Baumann was appointed consul to Zanzibar. In 1899, he was stricken with a tropical disease and died in a sanatorium in Vienna that year at the age of 35. Josephine Baumann wrote to Hans Meyer about her son's last days. These and other letters in this archive came from the descendants of Hans Meyer. €18,000 (US $20,462).