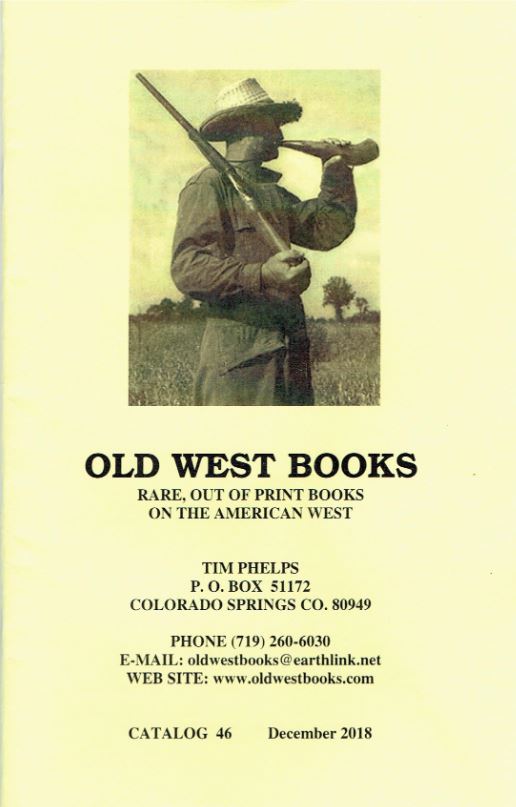 The American West in the 19th century.

Old West Books has released their Catalog 46 of Rare, Out of Print Books on the American West. The material here generally covers that period from slightly before the middle of the 19th century to the turn of the century. That is the period when the American West went from an area unknown to all but Native American tribes and a few hardy explorers and trappers/mountain men, to a land taken over by settlers from the East, the Indians consigned to reservations. Some of the books are contemporary to these times, others later histories, but most deal with this specific period. Within this selection, one name is seen far more often than others, and it isn't some gunslinger, lawman, Indian Chief, or entertaining personality like Buffalo Bill. It is that of General George Armstrong Custer. Custer certainly wasn't above self-promotion, and his widow continued to promote his legacy for half a century after he died. Nonetheless, we all remember Custer primarily for the worst day of his life. Here are a few selections from this latest Old West catalogue.

This one-sided defeat/massacre of American troops by western Indians would probably be better remembered today were it not superseded by the even worse disaster experienced by Custer and his men. It is known as the Fetterman Massacre, named for Capt. William Fetterman, who exceeded his orders in pursuing Indian tribes who were trying to block off the Bozeman Trail. It was a trail that led to the Montana gold fields, but also territory several tribes called home. His superior, Col. Henry Carrington, built Fort Phil Kearny to protect the trail, but some, evidently Capt. Fetterman among them, felt Carrington was not sufficiently aggressive in protecting it. Perhaps in retrospect, his caution was justified. None of the group who went with Fetterman survived, hence the appellation "massacre." Item 14 is an account of life at the fort and the massacre by Col. Carrington's wife, Frances C. Carrington. The title is My Army Life and the Fort Phil Kearney Massacre (should be "Kearny"), published in 1910. Frances was not married to Col. Carrington at the time of the massacre. His first wife was still living, and the second Mrs. Carrington was married to Col. Grummond, one of those who died with Fetterman. She attempts to set the record straight about her second husband, whose reputation was tarnished by the episode. Priced at $125.

Here is a rare book that partly takes place in the West, with appearances from Custer, Buffalo Bill, and various Indian chiefs. The title is His Imperial Highness The Grand Duke Alexis In The United States Of America During the Winter Of 1871-72. It was written by William W. Tucker and published in 1872. Alexis was the fourth son of Alexander II, which meant he would be an important figure in Russia though unlikely to ever ascend to the throne. In the winter of 1871-1872, he was sent to the United States on a goodwill trip. It started in the East, where Alexis met President Grant, briefly to Canada, then to the Midwest, a hunt in the far west, back through New Orleans and on to Florida, before returning home. His western adventure was centered around a buffalo hunt. Buffalo Bill was his host, but others participated, including Custer, Gen. Philip Sheridan, and several Sioux chiefs including Spotted Tail and War Bonnet. It was a luxurious western adventure, gourmet foods, fine carriages, plenty of liquor, and luxurious settings in their tents. However, Alexis did also get to do some hunting, both with Buffalo Bill and one of Spotted Tail's best hunters. From there, Alexis would return via the Mississippi River to New Orleans, accompanied by Gen. Custer. They became good friends for the (short) remainder of Custer's life. This book is very rare as it was privately printed in an edition of 212 copies for Tucker's family and friends who participated in the buffalo hunt. Laid in is a menu from a banquet held in Milwaukee on January 2, 1872, described by Old West as a "very extravagant menu." Item 109. $14,500.

Next is a view of Custer's demise by a man associated with the other side, America's natives. Edward Curtis was a photographer, who undertook an enormous photographic mission to the natives in the early 20th century. His large book of photographs is one of the most expensive and highly prized books about the West. However, item 57 is a more recent publication, by James Hutchins, published in 2000: The Papers of Edward S. Curtis Relating to Custer's Last Battle. Curtis interviewed Crow scouts and others during his time in the West, but his accounts were never published in book form prior to this edition. They provide Curtis' view of the famous battle. This is #21 of a signed, leather-bound limited edition of 50 copies. $125.

Here is a look at the far west and more from another general, E. D. Keyes. Keyes served a few years as an aide to Gen. Winfield Scott, who was a general for over 50 years, including 20 as Commanding General of the U. S. Army. The result is we get an insight into the man who was a general from the War of 1812 to the Civil War, where he was commander of all forces in the early stages. Keyes would move on to San Francisco during the Gold Rush and then serve in Indian campaigns in the Pacific territories. His military service concluded with leading troops in several battles during the Civil War. His book is Fifty Years' Observations of Men and Events Civil and Military, published in 1884. Item 74. $250.

Many people felt badly about Gen. Custer's fate at Little Big Horn. Here is a document, one page, from the U. S. Senate during the 44th Congress. It is a Resolution of Condolence of the Legislature of Texas in Relation to the Massacre of General G. A. Custer and his Men, dated August 7, 1876. Item 104. $250.

This is another such document, in this case from the Secretary of the Interior dated February 21, 1891. It is An Act for the Relief of Mrs. Elizabeth Custer. It increased Custer's widow's pension to $100 per month. Item 94. $250.