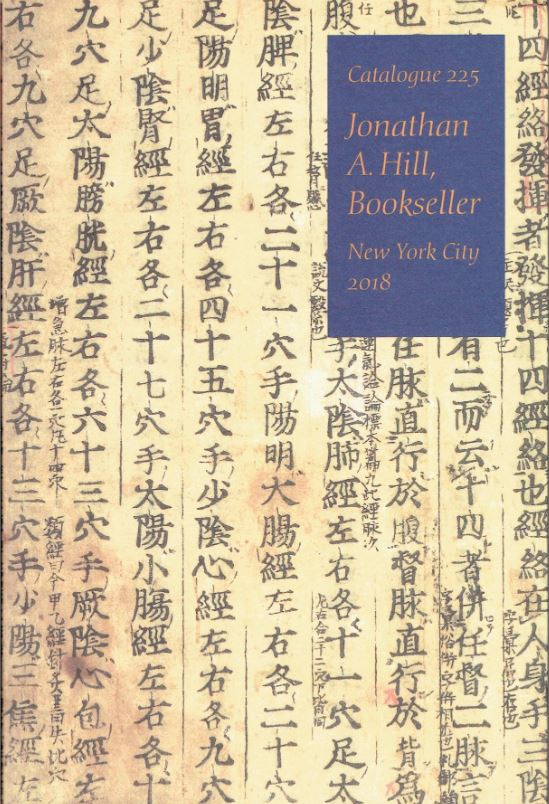 Jonathan A. Hill Bookseller has issued a catalogue of Japanese Books, Manuscripts & Scrolls. It is a sign of the internationalization of the book trade (and most other things as well). Hill is based in New York City, roughly 6,700 miles from Tokyo. No matter. Populations have mixed, and with the advent of the internet, trading between continents is no longer a significant obstacle. Hill is offering a substantial selection of Japanese material and much of it is of significant importance, books and manuscripts you would not expect to find in New York. But, here they are, so lets take a look inside.

One type of presentation with numerous examples in this catalogue is the scroll, leading me to believe this must be a more popular form of story-telling in Japan than in the West. Here is a pair that highlight another Japanese custom, at least of an earlier time, that seems very odd to an American. Hill calls them ceremonial cuisine scrolls. They provide a very detailed look at ceremonial banquets. These banquets featured many courses, each filled with symbolism. The larger scroll begins with "three rounds of drinks" (translated from Japanese). These aren't just drinks, but include snacks. This is followed with "three rounds for drinking," three more trays including preserved plums, jelly fish, salted roe, carved carp, dried fish, and shellfish. Many are served high, pine cone style. Next come five trays to celebrate the New Year, with cranes, turtles, lobsters, octopus, potatoes and so on. This is followed with five trays of sweets, including nutmeg, chestnuts, sweet seaweed, and Mandarin oranges. These feasts would last for three days, so more illustrations and descriptions follow for further meals. Now, large meals are not what seems odd to an American. We are, after all, the land of the all-you-can-eat buffet. What is surprising about these banquets, which were meant for shoguns, aristocrats, and the emperor, is that the meals truly were ceremonial. They were not meant to be eaten. The presentation and symbolism was what mattered. They were meant to be admired. A small number of dishes were to be eaten, but not most. I have no idea what happened to the food after the banquet was over. That fish wouldn't have kept well very long. This custom lasted from the 15th-17th century, so there's no need to fear disappointment if invited to a banquet in Japan today. According to Rath (Food and Fantasy in Early Modern Japan) "...ceremonial cuisine was synonymous with practices of not eating that demanded the appreciation of food in other ways, sometimes as a symbol evoking transcendent values such as martial virtues or marital felicity, and other items as an art form akin to flower arrangement or sculpture." Item 6. Priced at $29,500.

Here is another Japanese scroll, but this one, surprisingly, may be of even greater interest to collectors of Americana. Item 57 is a scroll of 30 joined sheets of paper with the title (translated) Strange View off the Coast of Kanagawa. It is dated Spring 1854, and those familiar with American-Japanese history will be familiar with that date. That was when Commodore Matthew Perry forced Japan to open its doors to some trade with America. The "strange" view depicted in this scroll is of Perry's ships off the coast. This "Blackship Scroll" was prepared by Otsuki Bankei, with assistance from two artists. Bankai was sent by his fiefdom lord to record the events once it was learned that Perry had returned after his first, briefer visit the preceding year. This time, Perry stayed for a month, and was able to come on shore and socialize with the Japanese. The scroll is divided into 20 scenes, depicting the visit. The first image shows nine American ships offshore, each named, its day of arrival and departure listed, its commander, size of crew, and number of cannons. The next shows Americans disembarking from the ships, and others continue, showing the reception hall, Japanese participants, American troops and bands marching in formation, with the encampment guarded by discretely armed samurai, a portrait of Perry and second in command Henry Adams, and so on. The final image is of a small scale train car that Perry brought as a gift for the emperor. $95,000.

Next we have what Hill describes as a "first edition of perhaps the greatest of all Japanese illustrated books." The artist was Utamaro, whose work from the late 18th century not only made him the most renown artist in Japan at the time, but years later was influential in the development of European impressionism. This is a "shell book," an illustrated book featuring sea shells. Its translated title is Gifts of the Ebb Tide, those gifts being shells that wash up on shore. It consists of eight double-page color-printed woodcuts, with poems provided by a poetry society. The first print shows people gathered along the beach at ebb tide, collecting shells. It is followed by six double-page images of shells, with poems running along the top. The final image is of young ladies, having returned home, they form a circle around and admire the shells they have collected. Item 69. $150,000.

Here is an item every American will know, though we associate it with Chinese restaurants. Hill tells us the tradition was actually derived from Japanese immigrants. Item 12 is a woodblock divided into 192 small boxes, each designed to create a printed fortune. Once the sheets of fortunes were produced, they would be trimmed into individual fortunes. You have undoubtedly figured out their purpose - to be inserted inside of fortune cookies. It includes such fortunes (translated) as, "God will help you," "Everybody likes you," and "I rely on you more than Budda." $3,500. Item 13 is a second woodblock, this one containing 224 fortunes. Among the words of wisdom are "Somebody is watching you," "Don't fight," "Fall in love," and "Sleep longer." $3,950.