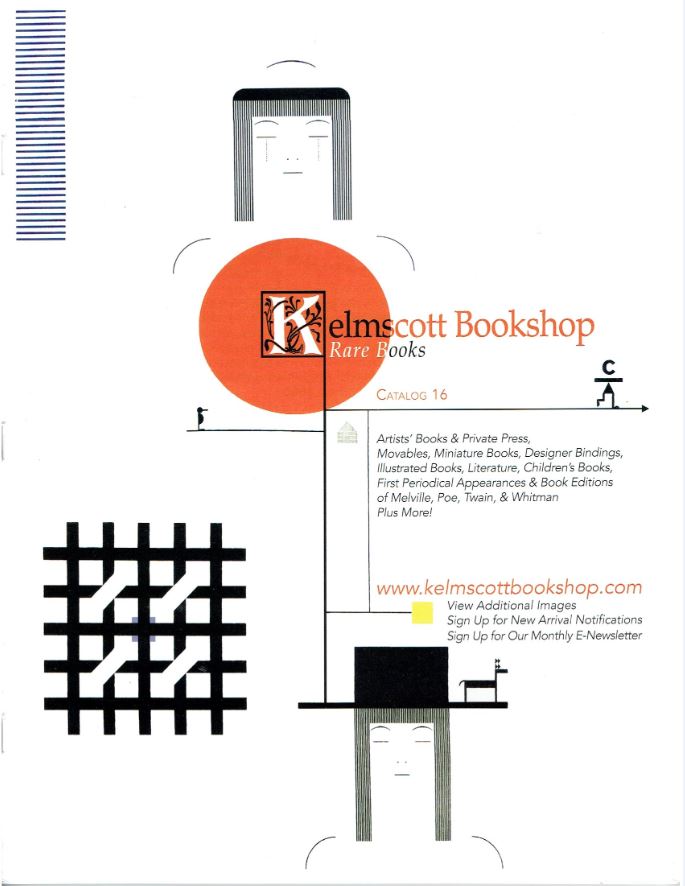 Catalog 16 from the Kelmscott Bookshop.

The Kelmscott Bookshop has printed their Catalog 16. What is there to be found? They have provided a concise summary: Artists' Books & Private Press, Movables, Miniature Books, Designer Bindings, Illustrated Books, Literature, Children's Books, First Periodical Appearances & Book Editions of Melville, Poe, Twain, & Whitman, Plus More. We might add that many of the artists' books are of recent vintage, from artists active today, not some time in the distant past. With that, there isn't much more needed in the way of introduction, so we will move right ahead to a few examples of items to be found inside.

We begin with one of the illustrated books. While illustrated books often imply beauty, in this case, the illustrations were meant more to enhance the message of the text, this being the most influential American book of the 19th century. This is not to take anything away from the skillful artwork of George Cruikshank. He was one of the most notable illustrators of the 19th century, his work often appearing in the books of Charles Dickens. Come to think of it, an illustrator of the downtrodden who appear in Dickens' novels is a perfect choice for this book. Item 108 is the first illustrated edition of Harriet Beecher Stowe's Uncle Tom's Cabin, published in 1852, the same year as the first American edition. This was the book that turned slavery from an abstract bad idea to a horror to which many Americans could relate on a personal basis. Its influence on large parts of the American public was enormous, leading to the realization that something had to be done. Unfortunately, no resolution was to be found other than war. Priced at $300.

Many people think of Gutenberg as the inventor of printing, which is not entirely accurate. The Chinese had invented paper and developed printing at least seven centuries before Gutenberg. What was notable about Gutenberg was his invention of movable type, which allowed for printing on a large scale and in volume. Chinese printing depended on woodblocks, a more time-consuming method which effectively limited it to single sheets. Item 78 is Paper and Printing in Ancient China by Berthold Laufer, published in 1931. Kelmscott notes that Laufer was the leading sinologist of his generation. This book came from a lecture he delivered to the Caxton Club, one of 250 copies. In it, Laufer describes the importance of paper and printing to the progress of civilization. The book was printed by noted printer and book designer Elmer Adler at his Pynson Printers in New York. Item 78. $225.

Here is one of those recent artists' books, except it isn't really a book at all. It is a collection of maps in a chest. It was created by Pat Sweet of Bo Press Miniature Books in 2017. The chest is made from varnished mahogany and leather with triangular brass decorations along the sides. Inside are 13 rolled up maps. These maps won't help you get anywhere. They are fantasy maps, taken from various novels. Such maps frequently appeared on the endpapers of fantasies. Among them are maps of Robert Lewis Stevenson's Treasure Island, Gulliver's maps from Jonathan Swift, Thomas More's Utopia, and an ocean chart from Lewis Carroll. Item 8. $365.

Next is one of those first appearances of a book that ran first as a serial in a magazine. Item 135 is volumes 22-24 of The Cosmopolitan, from 1897-1898. They included the first appearance of H. G. Wells' The War of the Worlds. It appeared in nine parts, each accompanied by illustrations by Warwick Goble (which Wells did not much like). The story would be published as a novel later in 1898. This story of an invasion of Earth from Mars has long been a popular science fiction thriller, never out of print. However, much of its fame rests with the radio production four decades later when many listeners thought an invasion from Mars was actually taking place, not realizing it was just an enactment of a fictional story. $850.

Item 99 is quite a collection of plays. It is a set of 25 volumes entitled The British Theatre; Or, A Collection of Plays, which were acted at the Theatres Royal, Drury Lane, Covent Garden, and Haymarket. They were gathered by Mrs. Elizabeth Inchbald and published in 1808. Mrs. Inchbald was herself a playwright and actress and contributed five plays. However, many come from writers far better known, starting with Shakespeare, along with others popular in their day but mostly forgotten now. Each volume contains five plays, beginning with an illustration. Each volume is bound in brown leather with marbled boards. $1,600.