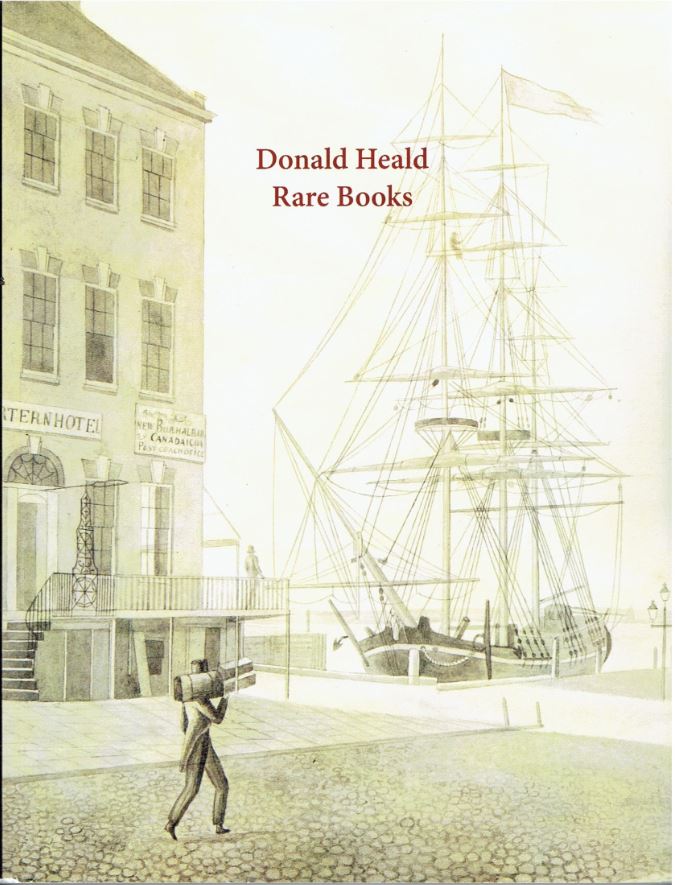 Donald Heald Rare Books has published a catalogue of Americana. There are 100 items and they are pieces of Americana at the highest level. There is little in the way of obscurity here. These are important works, covering the most significant events and personalities in the continent's history. Different aspects of American history are covered, but expect to see much from political and military figures, explorers and artists. Add to that some science, religion, and moral leadership. While most of the items pertain to the middle part of North America, the area now known as the United States, a few of them come from the more southern or northern realms of that continent. Here are a few samples.

We begin with one of the earlier visits to America, long before the pilgrims or even Jamestown. It wasn't exactly a visit, nor even a typical exploration. It was a conquering, and the conqueror was the quintessential Spanish Conquistador, Hernan Cortes. With an army of only 500 men and help from some local Indians opposed to the Aztecs, Cortes was able to bring down an entire ancient empire. He had conquered the land then called "New Spain," today Mexico. Cortes wrote five letters to Holy Roman Emperor Charles V recounting his exploits and successes in his mission. Item 1 is the second Latin edition of the second and third letters, published in 1532. The first letter is lost making these the earliest known first hand accounts of the conquering of Mexico. It covers events from 1520-1522. This second edition adds some new material to the Cortes letters, including Peter Martyr's De Insulis, a condensed version of the lost first letter, and three letters written by others from 1531-1532. Priced at $35,000.

A few decades later, the French attempted to settle a part of what is now the United States, Florida to be specific. In the 1560s, two French Huguenot expeditions traveled to Florida, led by Jean Ribault and René de Laudonniere. Among those accompanying Laudonniere was an artist, Jacques Le Moyne. All started out well enough, but then things went bad. Early favorable relations with the Indians turned sour, the settlers began to fight among themselves, and then the Spanish from St. Augustine attacked. The Spanish wanted no competition from the French and determined to wipe out the settlers. They achieved most of their aims, but a few of the settlers managed to escape and make their way back to France. Among them was Le Moyne. A couple of decades later, Theodor De Bry wished to publish accounts of American explorations. He wanted to publish a new edition of Laudonniere's journal, but enhanced by adding Le Moyne's illustrations. Le Moyne would not give De Bry his illustrations, but after Le Moyne died, De Bry was able to purchase them from his widow. Forty-two of Le Moyne's illustrations appear in this first Latin edition from 1590 of De Bry's Brevis Narratio eorum quae in florida Americae... These are some of the first depictions ever made of American natives. Item 3. $60,000.

Britain and her American colonists worked together to defeat the French in the French and Indian War. However, once that war concluded in 1763, the relationship quickly began to deteriorate. The war had been costly to Britain, leaving debts, expenses going forward to administer its newly captured territory in Canada, plus ongoing defense of the frontier against Indian attacks. They needed more funding, and not surprisingly nor necessarily illogically, expected the colonists to chip in. However, Parliament had no interest in giving the colonists any say in the running of the government, or how their money was spent. To gather those funds, Parliament passed the Stamp Act. It placed a tax on all sorts of paper - newspapers, pamphlets, almanacs, all types of legal and commercial papers. America's representatives in London, including Benjamin Franklin, protested, but to no avail. The reaction in America was swift. There were vociferous protests and evasion of the tax. A year later, surprised by the intensity of the reaction, Parliament rescinded the tax. The damage was done. The relationship was greatly strained, and as Parliament passed replacement taxes and later the Intolerable Acts, it grew worse. The die was cast, the American Revolution inevitable. Item 18 is the first official printing of the Stamp Act, effectively the birth of the Revolution, from 1765. $27,500.

In another example of there is nothing new under the sun, here is a sex scandal involving a high government official from the early days of the new republic. The scandal involved Secretary of the Treasury Alexander Hamilton, and ultimately Hamilton chose to come clean, though not so much in the interest of truth for its own sake as to disprove an even worse false claim against him. Hamilton had been messing around with one Maria Reynolds, wife of James Reynolds. When Mr. Reynolds found out, he did not challenge Hamilton to a duel to defend his honor. Instead, he saw a financial opportunity. Reynolds blackmailed Hamilton, who paid up to hide the affair. Unfortunately for Hamilton, his payments to Reynolds were found out, and the belief was expressed that Hamilton was speculating with government funds, using Reynolds as his conduit. Disproving this false claim was paramount to Hamilton, so much so that he thought it better to reveal the truth, that he was paying bribes to conceal his adultery, then to let people think he was speculating with government funds. Hamilton revealed the sordid truth in this pamphlet, Observations on Certain Documents contained in No. V & VI of "The History of the United States for the year 1794," in which the Charge of Speculation Against Alexander Hamilton, late Secretary of the Treasury, is Fully Refuted. This pamphlet was published in 1797, and Hamilton's family later bought up and destroyed every copy they could lay their hands on, only to have Hamilton's enemies republish it in 1800. While Hamilton's reputation for financial integrity was preserved, his moral reputation was shot, his admission making it virtually certain he would never attain higher office. Item 44. $48,500.

Several of the highest prices ever paid at auction for books are for one title and edition, John James Audubon's elephant folio edition of The Birds of America. However, that was not Audubon's only major project. He followed it with almost as ambitious a project, one that would be published under the title The Viviparous Quadrupeds of North America. That, too, has an elephant folio edition. Perhaps Audubon would be better remembered for his drawings of animals other than birds if his health had held out longer. Publication began in 1845, but by the time the first of the three volumes had been completed, Audubon's mental facilities had seriously declined. Illustrations were taken over primarily by his son, John Woodhouse Audubon, and text was written by Audubon's friend, clergyman and naturalist John Bachman, with some assistance from another Audubon son, Victor. John Woodhouse and Victor each married one of Bachman's daughters, so the ties were very close. The three volumes of elephant folio broadsheets were issued from 1845-1849, though the text and six later octavo plates were not completed until 1854. Item 75 is an elephant folio of Quadrupeds. $580,000.