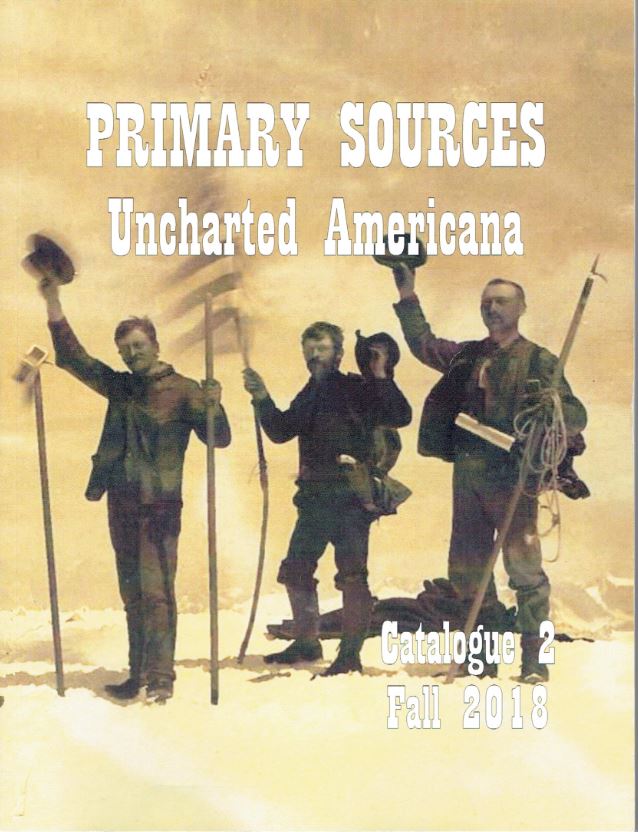 Primary Sources Uncharted Americana has released its second catalogue, Catalogue 2 Fall 2018. As their name suggests, the material goes back to original sources for historic events. You get to participate in the action as it unfolds. History is always most interesting through the eyes of those who witness it, even if such tales are not always accurate. So here we go, back in time, but with the advantage of not only the firsthand look, but the detailed explanations Primary Sources is able to give us with the benefit of further research and hindsight.

We begin with the only known firsthand account of the only military confrontation between the Republic of Texas and the United States. It happened at sea, between the U. S. Navy and the First Texas Navy. It was not much of a battle, but it is the best there ever was. During Texas' revolution for independence, they managed to commission a small "navy." One of those ships, after attacking a Mexican counterpart, turned on a private American ship, confiscating guns and other materials bound for Mexico. Later, the American ship's captain put in a claim in New Orleans, and when the Texas naval vessel was discovered near that port, it was overtaken by a U.S. Navy ship. It wasn't really a battle, just a ship overtaken and the crew carted off to jail in New Orleans. They were charged with piracy, but at a trial a short time later, the jury said no and the men were freed. That was it for fighting between the United States and the Republic of Texas, though 25 years later, the State of Texas would go into open warfare with the U.S. during the Civil War. The firsthand account of this confrontation was written by Lieut. James F. Miller, an officer on the American ship. Item 7. Priced at $6,500.

Next we have a major find in California history, an unrecorded first San Francisco imprint. It comes from early 1847. There was a small settlement in the area prior to this time then known as Yerba Buena. In the summer of 1846, it was seized by the U.S. Navy, and its second in command, Lt. Washington Allon Bartlett, was named alcalde (mayor). Its first newspaper, the California Star, debuted on January 9 of 1847. Two weeks later, Bartlett renamed the town "San Francisco." Publisher Sam Brannan felt he had no right to do so unilaterally, so he continued to call the town "Yerba Buena" in his masthead. However, he eventually relented. The last paper to carry the name Yerba Buena in the masthead was dated March 13, 1847. The March 20 issue used the new name. Item 9 is a broadside printed by Brannan in between those two newspaper editions, on March 16, 1847. It is thereby the first imprint to carry the name San Francisco. Besides that historical fact, it also recounts a major event in the city's history. The top half is a decree from General Stephen Kearny granting San Francisco ownership of its oceanfront lots. He did so on behalf of the United States, though it is dubious he had the authority to do so. The bottom half of the broadside announces the auction of said lots on June 29. San Francisco was on its way to becoming the city it is today. $150,000.

Item 16 is a broadside handbill presenting a major discovery - The Great Cardiff Giant! Discovered at Cardiff, Onondaga Co., N. Y. is now on Exhibition in the Geological Hall, Albany... It then lists the giant's dimensions, 10 feet, 4 1/2 inches in length, toes 6 inches long, 3 1/2 inch wide nostrils, and so on. It was dated November 29, 1869. The man was made of stone, but was still considered real - a fossilized human. It wasn't. Here is the real story. Two workers digging a well for a farmer named William "Stub" Newell of Cardiff discovered the giant when they came across the outline of a giant foot two feet down. They dug it up and Newell quickly put it on display under a tent. He charged 25 cents to see it, but as the crowds poured in, he raised the price to 50 cents. Newell next sold a 75% interest in the giant to a syndicate of businessmen headed by David Hannum for $23,000. They carted it off to Syracuse for display where it was viewed by an associate of P. T. Barnum. Barnum offered $50,000 for it, but when Hannum refused, Barnum had stonecutters make one for him, which he claimed was the original sold to him by Hannum. Barnum sold tickets to view his giant. He called Hannum's giant a fraud. Hannum sued. It was Hannum, describing the people who viewed Barnum's giant, not Barnum himself, who delivered the line, "there's a sucker born every minute." Meanwhile, the giant was viewed by archaeological experts who quickly labeled it a fraud. Yale paleontologist O. C. Marsh published a report saying he was surprised any scientific researcher would not have immediately recognized that it did not come from antiquity. So, where did it come from? It turns out, Newell's brother-in-law, an atheist named George Hull, after a discussion with a Methodist circuit rider over the authenticity of a section in the Bible claiming there had once been giants on earth, cooked up this scheme. He had a large stone taken from a quarry in Iowa shipped Chicago, where stone masons sworn to secrecy carved the figure, and then shipped it to New York. Newell and Hull buried it on Newell's farm, let it "age" for a year, and then "discovered" it. The irony is that all the parties, from Newell and Hull to Hannum and Barnum made money on the fraud. No one had to pay back a cent. However, Hannum lost his suit against Barnum for calling his giant a "fraud" because it was, though Hannum did not realize it at the time. Of course, Barnum's giant was a fraud too, but he knew it. $850.

Noah Webster is well known for his dictionary, even though almost two centuries have passed since he published it. That was 1828, but Webster was publishing textbooks for schoolchildren four decades earlier. In the 1780s, he published a grammar, a reader, and a speller. The first two on that list were not great successes, but the speller was. It provided Webster with the steady flow of income needed to devote his time to his major undertaking, Webster's Dictionary. His speller was first published in 1783, under the title Part I. Containing a new and accurate standard of pronunciation. That name was used for the first six editions. For the seventh edition, he changed the name to The American Spelling Book. That name lasted through at least the 260th edition. He revised the title again in 1829. Despite the popularity of the book, early editions are very scarce. There were 52 editions published prior to 1800, but Primary Sources notes that 25 of them are "ghosts," known to have existed but with no copies having survived. Item 1 is a twelfth edition, published in Providence in 1769. Most early editions were published in Boston or Hartford. This Providence edition was produced by the legendary printer John Carter. Only one other copy of this edition is known to have survived, and unlike this one, the copy at the American Antiquarian Society is incomplete. $4,500.

Primary Sources Uncharted Americana can be reached at 734-355-2986 or primarysources25@gmail.com. Their website is found at www.psamericana.com.