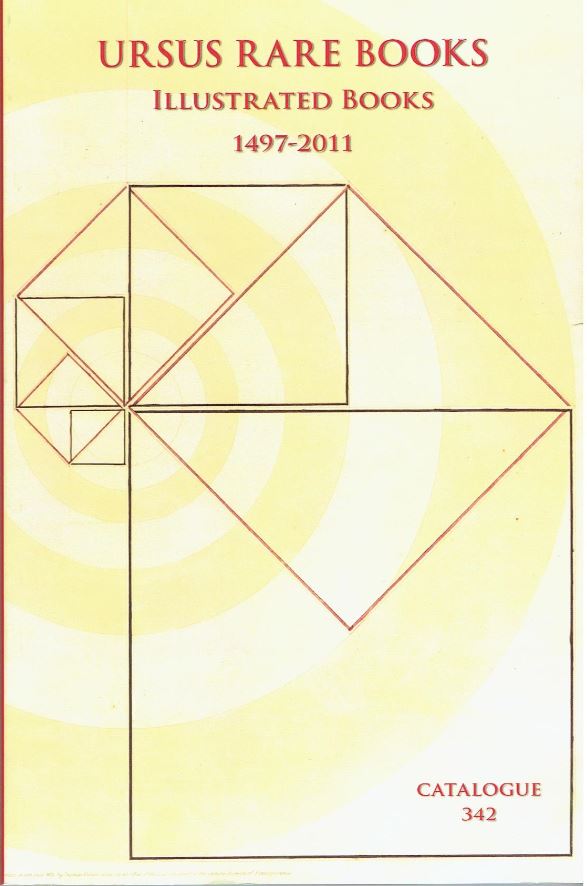 Ursus Rare Books has published a catalogue of Illustrated Books 1497-2011. That doesn't leave out too many years of printing. Naturally, the illustrations are high points of these books. However, that does not mean these books aren't significant or interesting for reasons beyond their art. There are scientific, mathematical, architectural, historical, humorous, and other varieties of books herein with much to say as well as display. Here are a few of them.

This first book was written two thousand years ago, though obviously, a printed edition is not that old. Indeed, this one is less than a mere 500. Item 3 is I Dieci Libri della'Architettura by Marcus Vitruvius. Vitruvius was a soldier, which explains the many places he visited, but more importantly, he was an architect. He lived in the first century BC in Venice. His "Ten Books" provides guides for architecture and perfect proportions that made his work valuable to architects fifteen centuries later when someone finally discovered printing. This 1556 edition is noteworthy as it was translated by, and contains the commentary of, Daniele Barbaro. Barbaro was, like Vetruvius, a Venetian architect, though he lived 16 centuries later. He was also a humanist, ambassador, church official, and member of a prosperous family. Barbaro was friends with the greatest architect of the era, Andrea Palladio. Palladio has provided many of the drawings for the book, and also explained many of the details of ancient architecture that were not clear to Barbaro so he could provide better descriptions. Priced at $37,500.

Next we have an ode to naval adventures from 1634, Der Zee-Vaert Lof, Handelende vande gedenckwaerdighste Zeevaerden met de daeraenklevende op en onderganghen der voornaemste Heerschappijen der gantscher Wereld. That's a mouthful if you don't speak Dutch. It means the Praise of Navigation and a bit more. The author was Elias Herckmans, who sailed with the Dutch Navy to Brazil. Despite his more limited personal experience, the long poem covers naval adventures since the beginning of time. However, it is not Herckman's verse which makes this book notable. Rather, it is one of its 18 etchings. It was created by Rembrandt, this being just one of three books for which he provided illustrations. It is believed to be of the defeat of Marc Antony by Octavian, though this is not certain. Item 12. $22,500.

Next we have some magnificent illustrations of the Crystal Palace Exhibition of 1851. The title is Dickinson's Comprehensive Pictures of the Great Exhibition of 1851, published in 1854 by Dickinson Brothers, Her Majesty's Publishers. The illustrations are taken from original artwork commissioned by Prince Albert from Joseph Nash, Louis Haghe, and David Roberts. Prince Albert, Queen Victoria's husband, had proposed a trade exposition like none other seen before. It was huge along with being international in scope. Nearly 14,000 exhibitors representing 26 nations attended. Joseph Paxton designed the Crystal Palace using cast iron and glass to create the modern structure. It was 1,848 feet long by 408 feet wide. More than 6 million visitors attended the exhibition. The Crystal Palace was so loved by Londoners that it was moved to another location and survived until 1936, when destroyed by fire. Item 38. $17,500.

This next book is a tribute to great women of all time, or at least to the middle of the 15th century. De Claris Mulieribus (famous women) contains 127 illustrated biographies. It is considered one of the most beautiful illustrated books of its century. The book was published in 1497. The illustrations of the more recent women in the book are true. However, women from earlier times rarely had portraits made so generic images were used, sometimes repeated. It is even more difficult to find images of some of the others, as some of these women are mythological. The author was Jacobus Philippus de Bergamo. The name of the artist has escaped identification for all of these years. Item 1. $87,500.

Physiognomy was once considered a science by many people. Certainly, Giovanni Battista della Porta was one of them. It was believed that one could determine another's character and moral sensitivities by looking at his physical attributes, the face in particular. Item 7 is della Porta's De Humana Physiognomia Libri IIII, published in 1586. It purports to be a scientific study and contains numerous illustrations to make its points. Della Porta opened an academy in his house devoted to studying the secrets of nature. Eventually, it was shut down by the Inquisition and his books banned. $9,750.

Here is something very different from the other books in this catalogue. Item 43 is The Illustrated Atlas and History of Yolo County, Cal. Containing a History of California from 1513 to 1850, a History of Yolo County from 1825 to 1880... published by DePue & Company in 1879. I'm not sure how they managed to get their statistics from 1880 based on that publication date. Yolo County is home to West Sacramento and Davis, but the major part of Sacramento is on the other side of the Sacramento River. Being in the Sacramento Valley, it is an area with much farming. They harvest tomatoes by the truckload there. Think Sacramento Tomato Juice. Naturally, the county was even more agriculture based at the time this atlas was published. Item 43. $4,500.