Books, Manuscripts and Pamphlets from the Lawbook Exchange 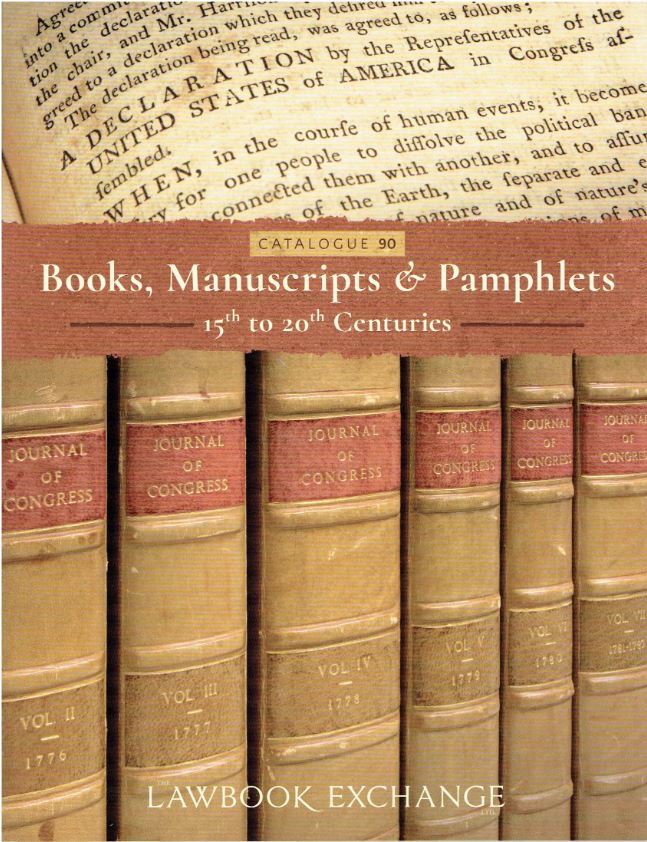 The Lawbook Exchange has released a catalogue of Books, Manuscripts & Pamphlets 15th to 20th Centuries. This is a mix of legal items, from some very early and ancient codes to scholarly texts, to trials for murder and other heinous crimes, to personal correspondence. Some of it is for legal scholars, others will be of interest to anyone. These are a few samples, with a focus on the not quite so scholarly types.

We will start with one of the more important discussions of the law to come out of America. It is a first edition, first issue of Oliver Wendell Homes Jr.'s The Common Law. Published in 1881, Holmes argues that the law is not a set of mathematical principles to be discovered in some sort of scientific way. Instead, he says it is a body of practices determined from real life applications. It is a living organism, not something unchangeable, fixed in stone like the Ten Commandments. Holmes' theories became enormously influential on American law, though the differing positions are still debated today. Item 54. Priced at $1,250.

Mary Lewis' husband presumably did not realize what he was doing when he spoke these words to his son-in-law, but these are words he never should have said. Mr. Lewis handed over £47 to his son-in-law, Charles S. Bartlett, as a dowry after his marriage to their daughter, Sarah. However, he cautioned there would be no more until after the death of his wife. That message inspired Bartlett to bring down the estimated arrival time of that fateful event by any means possible. Bartlett had been seen conversing with Mrs. Lewis several times in the days leading up to her death. Bartlett pleaded not guilty to murder, but to no avail. He was convicted and executed on April 15, 1837. Item 17 is a large broadside headed Full Particulars of the Murder, That was Committed on the Body of Mary Lewis, By Charles S. Bartlett, her Son-in-Law, On Saturday, September 10, 1836. Item 17. $4,500.

Henry Ward Beecher was perhaps the most influential person of his time, even more so than his now more famous sister, Uncle Tom's Cabin author Harriet Beecher Stowe. Like his sister, the famed minister was an abolitionist, and promoter of other progressive causes such as women's rights. However, he may have on occasion loved women a little too much. Item 114 is The True History of the Brooklyn Scandal: Being a Complete Account of the Trial of the Rev. Henry Ward Beecher... published in 1878. In 1875, Beecher was sued by one of his parishioners, Theodore Tilton, for committing adultery with his wife. Not surprisingly, it was one of the biggest scandals of its time. Ultimately, Beecher was acquitted when the jury could not reach a verdict. Beecher was found innocent by his church, and Tilton was excommunicated, but some still had their doubts. $500.

John Russell Tyson served a long career in public office in Alabama at the beginning of the twentieth century. He was a lawyer, city councilman, state legislator, circuit court judge, state supreme court justice, and eventually its chief justice. Over a decade after retiring from that last position, he ran successfully for Congress, being sworn in in 1921 at age 65. He died in office two years later. However, he was still around to add his two cents worth on one of the more notable bills of the era. Item 121 is The Antilynching Bill, Speech of Hon. John R. Tyson, of Alabama, In the House of Representatives, Wednesday, January 18, 1922. As might be expected of a politician from the Deep South at the time, Tyson, echoing the call of states' rights, condemned the bill designed to outlaw lynching. It passed the House of Representatives anyway, but was filibustered into oblivion in the Senate. $500.

Here is an unusual, but judicially wise letter from one of the more noted of U. S. Supreme Court Justices. Benjamin Cardozo succeeded the aforementioned Holmes on the Supreme Court and was similarly influential. Unlike Homes, who served for 30 years on the court, Cardozo served only six years before dying in office. Item 73 is a letter Cardozo wrote to Harold Shapiro in 1934. Shapiro was seeking a position at the New York Law School and asked Cardozo to write a letter of recommendation. Cardozo declined. It was nothing personal. He explained that he only writes such letters if asked by the person making the appointment. To do otherwise, he reasons, would conflict with the objectivity and impartiality called on for a judge. A photograph of Cardozo is included with this letter. $1,500.

So what happened to Mr. Shapero? Here is the answer. Item 74 is another letter from Cardozo (with another photograph), dated two months later in 1934. In it, Cardozo congratulates Shapero on his appointment to the faculty of the New York Law School. $750.