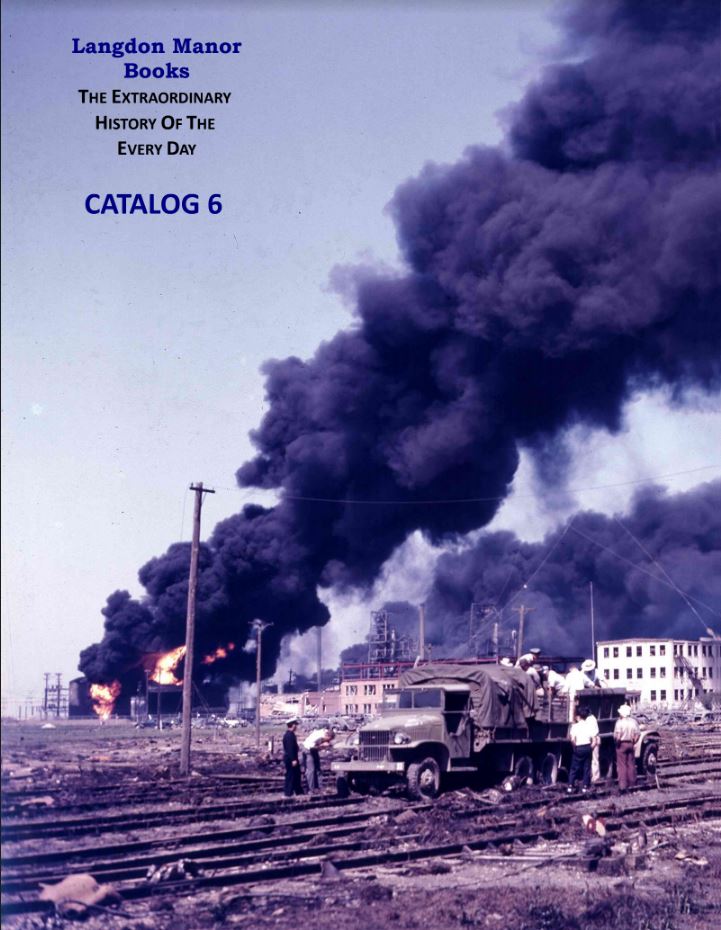 Catalog 6 of the extraordinary.

Langdon Manor Books, subheaded The Extraordinary History of the Every Day, has released their Catalog 6. It is filled with documents, manuscripts, and photographs from "everyday" people. As we discover, many lived extraordinary, if under the radar lives. People are fascinating. The catalogue is divided into specific topics, and here they are: African Americana, Business, Japanese Americans, LGBTQ, Marshall Plan/China/Industrial Photography, Medicine, Native Americans (including Alaska), Politics, Texas, Women, and World War II. These are a few of the items you will find in this selection.

We begin with a large archive of material from one of those extraordinary ordinary people. It consists of three scrapbooks kept by David Fox Nelson from 1869-1879 and 1890. He was born into slavery in North Carolina, and with other slaves in 1862, the between 9-11-year-old Nelson plotted an escape when Union troops neared their location. Ultimately, the others withdrew and Nelson alone made the escape. He provided the soldiers with intelligence. They took him in and assigned him tasks. One of those soldiers was Roscoe Conkling. A few years later, Conkling was elected a senator from New York where he became a leading advocate of the former slaves' rights. Conkling and Nelson became lifelong friends. Nelson would also become friends with Thurlow Weed, the New York newspaper publisher and another powerful political figure. He became a clerk in the New York post office and chief messenger for the postmaster. The first scrapbook contains many newspaper clippings that would be of interest to African Americans seeking their rights in post-Civil War America. A few of them recount Nelson's own escape. His story was corroborated by Conkling in his autobiography. The second scrapbook has the name of Cassie Day on the cover. It is filled articles about various topics which Nelson evidently felt were important with which to be familiar. It is dated 1878. Nelson married Miss Day, though it took another 18 years to get around to it. The third is filled with correspondence Nelson received. Many are from significant people, testimony to Nelson's reputation in a time when knowing such substantial personages would have been rare for a former slave. Mrs. Conkling tells Nelson she will send him a framed photograph that Conkling gave President Chester Arthur and which he obtained from the President's estate. Thurlow Weed's daughter sends him an invitation to her daughter's wedding. Item 12. $12,500.

If religion is supposed to be uplifting, Sarah Ann Welch missed the point. Item 48 is an extensive journal she kept from 1838, when she was 19-years old, until 1841. There are 187 pages, approximately 43,000 words. Hailing from Baltimore, she was a recent Methodist convert, but her faith was filled with enormous guilt, which obviously left her feeling miserable. She begins by saying she can't be really happy without religion, but is filled with anxiety because she believes she is sinful. Things in life that normally would make her happy she now sees as conflicting with the needs of her soul. "I do not desire anything but what pleases God to grant me," she writes, "but I do sometimes think that I might have that which would make me happier here. I know it is in kindness that my Heavenly Father denied it to me; and I feel no other disposition than thankfulness toward my heavenly father for it leads me to seek all my happiness from him and he is the only source of happiness. I feel sad today but I like this feeling; it is a calm resigned feeling." Later, she writes of a happy day with friends, but expresses fear "it will take too much of my heart from God." Eventually, she becomes engaged to Mezick, a childhood friend whom she loves dearly, and yet, guilt-ridden, she writes, "Mezick is dearer to me than life, but if it's the will of God, to deprive me of him I would give him up though it broke my heart." She even writes of a powerful temptation she had one night. "What a mercy it is I was not overcome. I shudder to think of it." I'm not sure whether Mezick shared those sentiments. $2,750.

Item 24 is a poster for the National March on Washington for Lesbian and Gay Rights. The march, inspired by Martin Luther King's 1963 march on Washington, drew an estimated 200,000 members of the LGBTQ community and supporters. Prior to this time, demonstrations and organizing took place only on a local basis, but groups from around the country worked together to bring about this massive demonstration. They called for the passing of gay and lesbian rights legislation, repeal of anti-gay and lesbian laws, and an end to all forms of discrimination. The date of the march was October 14, 1979, and it brought about few tangible results short term. However, it mobilized the community to keep making demands, and in time, part, though not all, of the agenda has been fulfilled. $400.

Item 42 is a 1909 printing from the Roycroft Press entitled The First American. The cover title is A Tribute to the North American Indian. It represents an ambitious project led by Rodman Wanamaker, son of Philadelphia department store magnate John Wanamaker. The younger Wanamaker was deeply concerned with the vanishing heritage of the American Indian and the lack of appreciation for them by the general public. He published three books of photographs of expeditions to document native culture titled The Vanishing Race. Wanamaker proposed to build a statue on Staten Island, near the mouth of the Hudson River, which would rival the Statue of Liberty. If you have been to New York recently, you are aware that this never came to pass. This book commemorates a dinner to promote the project and honor William "Buffalo Bill" Cody. Some excerpts from his speech are given. The purpose of the statue, it explains, is "to typify the country's debt to the vanishing race of 'First Americans' and to remind the ages to come of the finer, better traits of the Indian." The government provided land for the statue, but not funding. Groundbreaking took place in 1913, but that was about as far as the plan got. $275.

Unfortunately, it seems difficult to get large scale projects to honor native Americans off the ground. Item 36 is a presentation binder with photographs of drawings and designs for the American Indian Memorial. Published circa 1953, it is the work of Volney H. Jones, Jacques LesStrang, and E. Harlan Daniels. This was a proposal for a national memorial to be built in Gallup, New Mexico, near Indian land. It was the brainchild of architect Harlan Daniels. The centerpiece of a complex of structures was to be a 280 foot tall statue, "the Colossus," which would contain two elevators and an exhibition space. That would not be all. There was to be a research center, museum, residence halls and a workshop on the property. The estimated price was $9 million, or $85 million in today's dollars. I have been to Gallup recently and take it from me, there is nothing like this there. There is a mention of the project in the Congressional Record, and some newspaper articles, but it all seems to have faded away by 1955. $1,350.