The Unusual and Uncommon from Walkabout Books 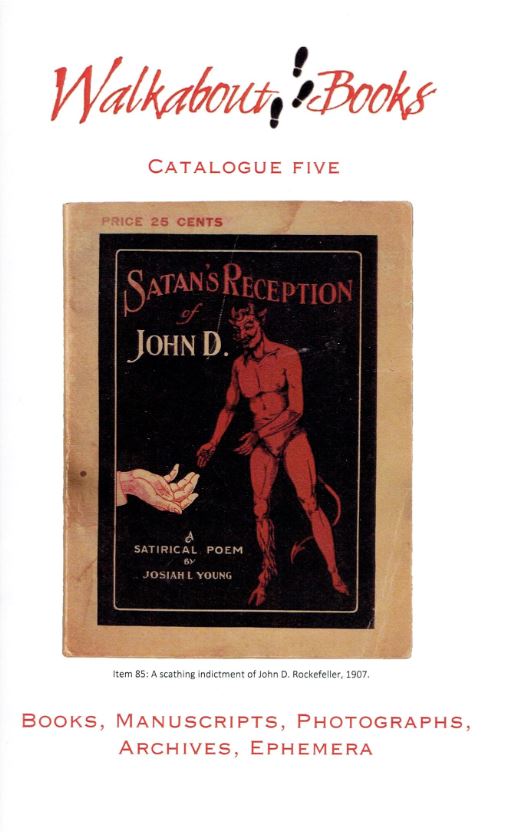 The uncommon and unusual from Walkabout Books.

Walkabout Books has released their Catalogue Five of Books, Manuscripts, Photographs, Archives, Ephemera. If you have a penchant for the odd, or a sense of humor, you are going to love this catalogue. That's not to say everything is weird. There are some wonderful collections of photographs and other historic and serious material. It's just that it's hard to overlook items that are really weird, and this catalogue has its share. There's some great entertainment here, and very few of these items will make much of a dent on your budget. Here are a few.

We begin with an example of the weird, which just happens to be the item pictured on the cover. The title is Satan's Reception of John D., John D., naturally, being John D. Rockefeller. The author is Josiah L. Young, about whom Walkabout was able to find nothing. The publication date was 1907, and while Rockefeller was 68 at the time, he was still very much alive with another three decades still to go. Satan can wait. This is a scathing indictment of the world's richest man, presented in a 54-page poem running to 1,070 lines. Young seriously did not like Rockefeller. In it, Rockefeller appears before St. Peter and pleads his case to be admitted to heaven. Peter is filled with replies which eventually force the oil baron to go to Hell, quite literally. For example, Rockefeller points out the moneys he has given to charity. St. Peter responds, "Ten millions to some charity you sent / Then raised the price of oil one-half percent." Item 86. Priced at $500.

Harlow Linzel Erskine had it hard. Not only was he serving in the Civil War, a brutal conflict from which he fortunately survived, but also had to endure loads of guilt dished out by his parents. Item 31 consists of seven letters Erskine received from family members in 1864-5. His father lectures him about not telling them enough, particularly about his health and a stay in the hospital. Optimistically, sort of, he writes, "I hope you will live to see the conclusion of the war and not be disabled or broken down, or taken prisoner. I know that is asking much." His mother warmly tells him, "just think of your Pa and I poor old cripples here alone, must work sick or well, the chores must be done." Perhaps they harbored a grudge over Harlow leaving the farm at age 19 to find his own place in the world several years before enlisting in the army. Ma ads, "when I have been sick three days to get a letter from you I get up go to work. It is better than a quart of medicine." $350.

For those who think mileage standards for automobiles are too tough for makers to meet, here is one that was achieving over 32 miles per gallon in 1914. Maybe they should look at Franklin's technology. Item 15 is a pamphlet headed Franklin National Economy Test. Ninety-four Cars Average 32.8 Miles on One Gallon of Gasoline. A National Proof of Franklin Economy. The proof was based on Syracuse, New York based Franklin having dealers across the U.S. test 94 Franklin cars. Each put one gallon of gas in their tanks and measured how far they went before they ran out of gas. The best car went an amazing 51.2 miles. Of course, we don't know if the dealers followed testing standards the government would require be met for making such claims today. Perhaps the dealer in Milwaukee who reached 51.2 miles was driving downhill. Without having access to a 1914 Franklin, I can't be sure. $175.

If you are ready for a road trip in a car that did not achieve 32 mpg, here is a possibility. No, actually this is not a good idea. It was very dangerous at the time of this trip (1924), but today it would be totally insane. Item 1 is Into Forbidden Afghanistan, Peshawar to Kabul and Back by Buick. It is an account of journalist Lowell Thomas' journey through Afghanistan in a Buick adapted for racks of photographic equipment and extra gasoline. Perhaps the 32 mpg Franklin would have been more suitable. This booklet tells us about the scenery and people encountered on this journey through the back country. The unknown author writes of the travelers' encounters with "natives with accurate rifle-aim and sensitive trigger fingers." They are described as "a bloodthirsty lot." We also hear about sandstorms, punishing heat, perilous roads, inferior treatment of women, and "pathetically secluded lives." As bad as it was then, such a trip through Afghanistann would be far more dangerous today. While the focus of this booklet is Afghanistan, it obviously was intended to promote Buicks, as it was published by General Motors Export Co. $450.

Welcome to the Hotel California. Such a lovely place. Item 21 is a promotional brochure for The California, San Francisco. Circa 1891, the California opened in 1890 as an eight-story luxury hotel. Indeed, it was "unquestionably the most beautifully and luxuriously furnished hotel in America," an unquestionable proposition undoubtedly questioned by other hoteliers. It featured a first-class restaurant, domed music room, arched gentleman's reading room, billiard room, wine room, smoking room, and ladies conservatory filled with tropical plants and rare flowers. What's more it was "positively fire-proof." I don't know about that earlier claim, but this one was positively false. It was consumed by the fire that followed the 1906 San Francisco earthquake. $350.

Do you know which one is the Sunshine State? Wrong! It's South Dakota. It says so right here - South Dakota, The Sunshine State, Offers You a Homestead for as Little as $1 per Acre and 20 years to Pay. Even I could handle 5 cents a year. As for the sunshine, it does shine a lot up there, though it isn't much stronger than starlight in winter. "If you are dissatisfied with your lot in life, if you are tired of the worries and uncertainties of city life...if you have only become a cog in the machine...here is offered a golden opportunity to build a future as you would like to have it." Indeed, this was a great chance to exchange the worries and uncertainties of city life for the greater worries and uncertainties of life in rural South Dakota. This brochure was published circa 1930s. Item 90. $75.

Here is a bit of American history you don't know. Item 78 is a poster for James G. Blaine, Twenty Second President of the United States, Presented by the Toledo Blade. Grover Cleveland didn't know that piece of history either. This one has shades of the Chicago Tribune's embarrassing "Dewey Beats Truman." This was a very tight race and obviously the Blade called it a little too early. President Blaine joined the ranks of President Samuel Tilden, President Al Gore, and President Hillary Clinton. $275.

Here is something you can do even if you didn't know it. You have the ability to handle incendiary bombs. It's a snap. Item 120 is a 1942 broadside from the Portland (Oregon) Fire Department and Civilian Defense Council, headed Incendiary Bomb Control. With fear on the west coast of an attack from Japan, the fire department and defense council reassure the citizens of Portland they can handle the bombs themselves. A garden hose should do the trick. They tell citizens "DON'T call the Fire Department unless the fire from the bomb gets out of control... DON'T fear incendiary bombs. They CAN BE CONTROLLED without danger to yourself." I'm not sure whether this advice is reassuring or frightening. $50.