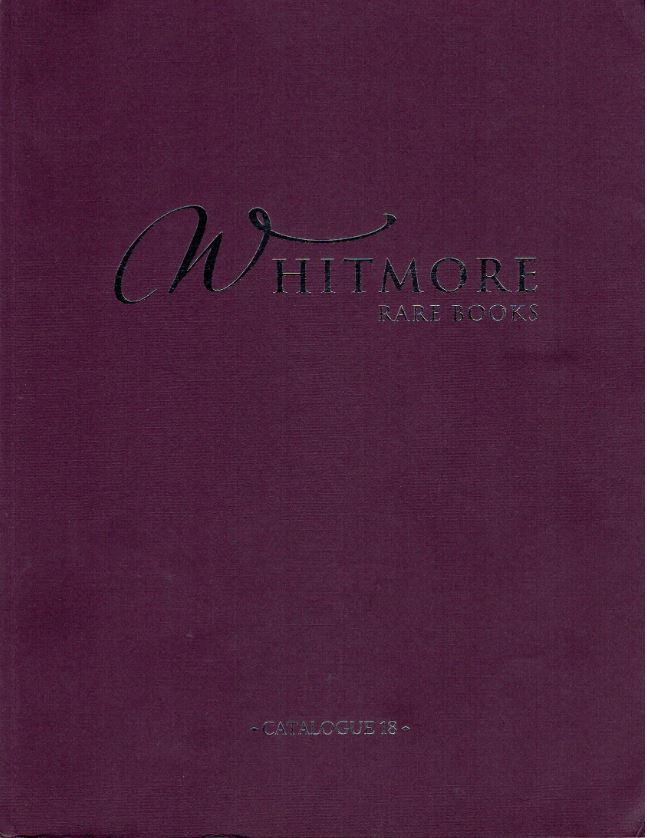 Whitmore Rare Books has issued their Catalogue 18. It is not topic-specific, and has no further title. What you will find is a mix, novels and nonfiction, throw in some poetry and children's books, and add a cookbook. What is in common is the significance of the books and that they are in top condition. Those two are specialties of Whitmore. Here are some examples.

Item 36 is The Firste [and The Laste] Volume of the Chronicles of England, Scotlande, and Ireland. This is a 1577 first edition of the history by Raphael Holinshed, commonly known as Holinshed's Chronicles. The Chronicles were conceived three decades earlier by printer Reginald Wolfe. Wolfe's plans were more ambitions. He wished to create a history of all the nations of the world. He set Holinshed and others to the task. It was still incomplete when Wolfe died in 1573. It was then revised to a less ambitions goal, a complete history of the British Isles. When published in 1577, it was the most thorough history of England, Scotland and Ireland published to date. Holinshed's Chronicles are particularly noted for being the basis of some even greater works. Shakespeare used his history to write several of his plays, including Macbeth, King Lear, and Henry III. Priced at $75,000.

Here is a man who must have been a real joy to behold. He devoted his life to self-righteous, vicious attacks on others, and on any hint of people having fun. He would not have appreciated the aforementioned Shakespeare. Item 53 is Histrio-Mastix. The Players Scourge, or the Actors Tragaedie... by William Prynne, published in 1633. Prynne was not fond of plays or anything associated with them. He believed they were the work of the Devil. He particularly objected to cross-dressing males, common in plays of the day as women were usually not allowed to perform. For those who did, he had a personal epithet, "notorious whores." It was typical of the way Prynne described those with whom he disagreed. There were lots of other things that Prynne didn't like, including dancing, which was not the wisest of opinions to voice since Queen Henrietta Maria, wife of Charles I, held parties featuring activities that he condemned. Prynne was tried, sentenced to having parts of his ears chopped off, and life in prison. He was sentenced to life in prison several times but each time he was freed much sooner. When let out, Prynne returned to his diatribes, had even the stubs of his ears cut off, was branded on his cheeks with stigmata, and sentenced to another life sentence. If nothing else, one has to admit that Prynne held to his principles. Eventually, he was returned to official respectability after the Restoration. $3,500.

Next we have Charles Darwin's application of his theory of evolution, first enunciated a decade earlier, to humans, as if the original wasn't controversial enough! Item 14 is The Descent of Man, and Selection in Relation to Sex, published in 1871. Darwin concluded that humans arose from the same processes as did other animals. In looking for their origin, he figured it must be where other closely related species, now extinct, lived. Since the most similar animals, apes, lived in Africa, he figured, correctly, that this was most likely humans' starting point. Darwin believed women played a major role in human evolution through their power to select a desired mate. He also notes how particularly human developments, such as sympathy and medicine, have altered the process of natural selection for this species. It was in the Descent that Darwin first introduced the term, which did not appear in his earlier Origin of Species, to describe the process - "evolution." $9,500.

From the greatest scientist of the 19th century we seamlessly move to the greatest scientist of the 20th. Item 19 is Die Grundlage der Allgemeinen Relativitastheorie, by Albert Einstein, published in 1916. This is the first edition, written in Einstein's native language, German. At least Darwin's theory was understandable to laypeople. Einstein's brain was on another level. This is the book where he enunciated his general theory of relativity, and it explains so much of how the universe operates to those few people with the capacity to understand it. He explains such seemingly illogical things as light traveling at the same speed to an observer regardless of their own speed, the concept of space time, and other ideas hard to comprehend or accept that have continually been borne out a century later as greater abilities to observe and measure phenomena have arisen. In his book, Einstein explains how the universe, through its physical laws, can operate on its own, unlike Newton, who concluded that God must interact with it on occasion to keep everything moving as it should. $8,500.

This next item is an important piece in the development of women's rights. It comes, appropriately, from the first centennial of the United States, July 4, 1876. Item 70 is a four-page pamphlet signed in type by leaders of the women's suffrage movement, Susan B. Anthony, Elizabeth Cady Stanton, Lucretia Mott, Belva Lockwood, and twenty others. It is headed, Declaration of Rights of the Women of the United States by the National Woman Suffrage Association July 4th, 1876. It was prepared for a celebration of the centennial at Independence Hall in Philadelphia. During the proceedings, Anthony arose from her seat, ascended the stage, and began reading the document, to the bewilderment of the presiding officer. By this point, black men, long held in slavery, had been granted the right to vote by constitutional amendment, and yet women still lacked the franchise. The Declaration states, "We ask justice, we ask equality, we ask that all the civil and political rights that belong to citizens of the United States, be guaranteed to us and our daughters, forever." It took almost another half century, but in 1920, women's right to vote was finally recognized. $37,500.