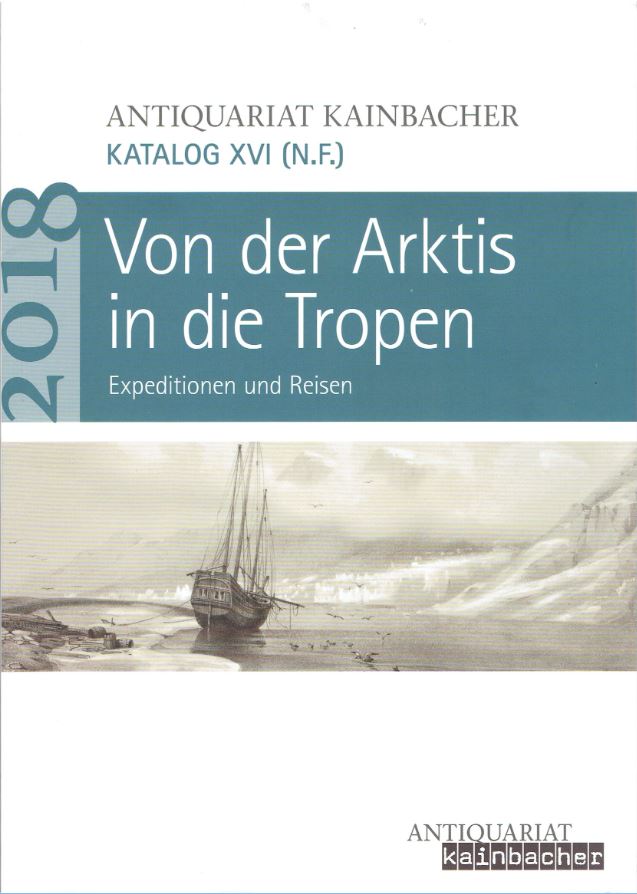 From the Arctic to the Tropics.

Antiquariat Kainbacher has issued their Katalog XVI, Von der Arktis in die Tropen Expeditionen und Reisen. That translates to "From the Arctic to the Tropics, Expeditions and Travel." That title not only tells us that the books contain travels to regions of climatic extremes, but that the catalogue is written in the German language. Most of the books are also in German, but not all. English and French can also be found. Likewise, many of the explorers were German, but along with books not in German are German editions of books about explorers from other countries. In other words, the appeal of this catalogue is wider than it might initially appear. Here, now, are a few selections from it.

We begin with Vom Brodfruchtbaum (From the Breadfruit Tree). It appeared in Gartenkalender (Garden Calendar) for the year 1784. It is an account of the discovery of this marvelous fruit tree. While known for centuries, particularly among Polynesians on whose islands it flourished, it was publicized as a result of the journeys of Captain James Cook to the Pacific islands. It would be the German naturalist father and son team of Johann Reinhold Forster and J. Georg Adam Forster, who traveled on Cook's second voyage, who gave it the technical name of Artocarpus. That is taken from the Greek words artos (bread) and karpos (fruit). However, the "breadfruit" moniker goes back to George Anson's circumnavigation in the 1740s when his sailors were willing to substitute the starchy fruit for bread. What the English decided is that the breadfruit would be a good source of food for their slaves in the Caribbean. They thereby commission Capt. William Bligh to go to Tahiti and transport a group of the trees to Jamaica. You already know how that turned out - the infamous mutiny on the Bounty. Ultimately, the plan was a failure. The slaves refused to eat the stuff. Priced at €2,200 (euros, or approximately $2,504 is U.S. dollars).

Next up is Zweyfache Reise nach Amerika der beyden Russischen Seeofficiere Chrostoff und Dawidoff. This is an account of trips to America by Russian officers Chrostoff and Dawidoff. These were trips to Russian America, also known as Alaska, but they also paid a less than friendly visit to Japan. The Russians wanted to trade with Japan but their overtures were not welcomed. Chrostoff and Dawidoff were imprisoned, but managed to escape. This book, published in 1812, was the work of Russian writer August von Kotzebue and I have not been able to determine the level of accuracy of the account. The book describes their visit to Alaska along with the unpleasant stop in Japan, their escape, and return to Petersburg. They later went off to war, survived that too, but fell through ice in Petersburg one night when staggering home drunk and drowned. €2,500 (US $2,845).

This is a first German edition of a compilation of works pertaining to America. The title is Von dem Newen Hispanien (from New Spain), published in 1550. The most notable parts are the second and third letters of Hernan Cortes, the Spanish Conquistador who captured Mexico, destroying the Aztec empire. With not very many men he was able to take over an entire empire. The Aztecs were not prepared for invaders from a land unknown. Along with Cortes are works from Peter Martyr, Oviedo, and others, including the first account of Germans in Venezuela. €39,000 (US $44,410).

Next we go to Africa, this time near the end of the 16th century. This is a rare first English edition of A Report Of The Kingdome of Congo, a Region of Africa. And of the Countries that border rounde about the same. It was prepared by the Portuguese merchant Duarte Lopez who traveled to the Congo in 1578 and remained for nine years. The account was edited by Filippo Pigafetta and first published in Italian in 1591, in English in 1597. Lopez was appointed by Congo King Dom Alvaro I as ambassador to Spanish King Philip II, seeking more trade and to discuss mining prospects. He also attempted to meet with the Pope to discuss sending missionaries. He was unable to gain an audience, but did meet Pigafetta, who helped put together this account. It describes African "Amazons" and a tribe of cannibals. It also describes the land, includes images of Africans in native dress, and some of the best maps of Africa from this era. €45,000 (US $51,243).

Here is an Arctic rarity: Report from Select Committee on the Expedition to the Arctic Seas, Commanded by Captain John Ross, published in 1834. Ross led his first Arctic expedition in 1818. It didn't go so well. He didn't get lost, lose a bunch of his men, or anything like that. What happened is that he was sent on one of many attempts to locate a northwest passage, a sea route from the Atlantic to the Pacific on the north side of the North American continent. However, just as he was about to enter Lancaster Sound, what would later prove to be the opening to the route, Ross thought he saw mountains in the way. Others thought they might be a mirage, and encouraged him to move forward. Ross was convinced they were real and returned to England. A year later, one of his lieutenants returned to the area and sailed through Ross' imaginary mountains. It was seriously embarrassing, so much so that the Admiralty would not finance another journey. Instead, he obtained private financing, and while still not finding a northwest passage, he made many discoveries over a four-year period, lost only three men, and his nephew, who accompanied him, became the first person to reach the magnetic North Pole. This report is Ross' after-the-fact request for payment for his men in recognition of their discoveries on behalf of the Crown. His accomplishments were recognized and the government paid. €8,800 (US $10,021).