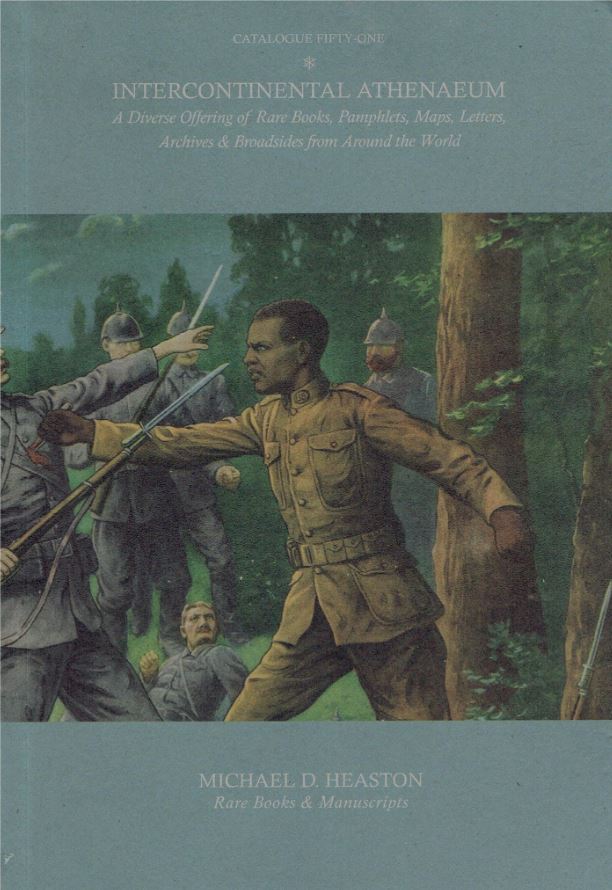 Michael D. Heaston Rare Books & Manuscripts has released a catalogue entitled Intercontinental Athenaeum. A Diverse Offering of Rare Books, Pamphlets, Maps, Letters, Archives & Broadsides from Around the World. A diverse offering means that it is hard to provide a concise description of this catalogue other than to say the material is diverse. We do note that most items relate to America, but there are others from far away. Here are a few samples from this selection.

We begin with a major item in Mormon history, the announcement of a migration well known to Americans outside of the church as well. It is a broadside headed A Circular of the High Council. To the Members of the Church of Jesus Christ of Latter Day Saints... issued on January 20, 1846, from Nauvoo, Illinois. The Mormons had been hounded from location to location, always unwelcome, often violently so, wherever they went. They had settled in Nauvoo only to meet great hostility from their neighbors. The church's founder, Joseph Smith, and his brother had been killed while in jail by an angry mob. His followers knew they had to get out of there fast. This circular is an announcement by the church's leadership that they would move west, somewhere, ultimate destination unknown. It says, "Our pioneers are instructed to proceed west until they find a good place to make a crop, in some good valley in the neighborhood of the Rocky Mountains, where they will infringe on no one, and be not likely to be infringed upon." That place would turn out to be near the Great Salt Lake, a location where they believed no one else would want to live and thereby leave them alone. The proclamation also notes that their settlement could help secure American claims to the Oregon Territory, still in dispute with England, an obvious attempt to gain sympathy from the federal government. It also refutes charges made against their community in Nauvoo. Only three other copies of this important broadside are known, all in institutional collections. Item 181. Priced at $20,000.

This is an account by another Mormon pilgrim to Utah, not quite as early, but he had to travel a much longer distance. Item 96 is Route from Liverpool to Great Salt Lake Valley... published in 1855. It is edited by James Linforth, but the protagonist of this story was Frederick Piercy, a 23-year-old Mormon convert from England. He made the long journey in 1853 and this book contains his account. However, what is most remarkable about the book are the illustrations. Piercy was a talented artist and he drew scenes he saw along the way. Among those are New Orleans, the ruins of the Nauvoo temple and the jail where the Smiths were killed, Scott's Bluff, Council Bluffs, Fort Bridger, Laramie, and scenes in Salt Lake City. Piercy's illustrations are considered some of the finest views of the American West at this time. Howes called it "one of the most elaborately and beautifully illustrated of western books." $30,000.

Next we have a prescient speech delivered by an ex-president, now Massachusetts congressman, in 1842. This is an Address of John Quincy Adams to His Constituents... It was delivered two years before the election of the "Manifest Destiny" president, James K. Polk, three years before the annexation of Texas, and four years before the beginning of the Mexican War. Adams could see it all coming. He was not pleased. The issue here was slavery. He foresaw the annexation of Texas, which he realized would come in as a slave state. He also saw the South as promoting the "dismemberment of our neighboring Republic of Mexico, and the acquisition of an immense portion of her territories...including the port and harbor of San Francisco, in California." Again, he saw the problem as being the admission of more slave states, which would upset the balance of power between the North and the slave-holding South. All of this came to be, and set off controversies between North and South, abolitionists and slaveholders, that made the Civil War virtually inevitable. Item 1. $385.

For those who collect old railroads, here is a chance to find something from an obscure 19th century railway that may never come along again. The railroad was the Leavenworth, Lawrence and Galveston Railroad. The reason the line was connecting two towns in Kansas with far away Galveston, Texas, was that Galveston had a port where products could be shipped anywhere in the world. However, the line never made it to Galveston. It never got past the border of Indian Territory, today Oklahoma. This was a time of massive railroad building, investors believing railroads were the future and starting them up as fast as they could. The LL&G was formed in 1868 and raced to get a government grant to cross Indian Territory. Unfortunately, like so many railroads, problems arose, money dried up, and they either shut down or were absorbed by larger competitors. Ten years after it was formed, the Leavenworth, Lawrence and Galveston was taken over by the Atchison, Topeka & Santa Fe. Item 95 is a Circular to the Stock and Bond Holders of the Leavenworth, Lawrence and Galveston Railroad Company, from 1873. That was right in the middle of their existence, the most optimistic of times for the company. Years later, the tracks of the old LL&G were abandoned by the Santa Fe Railroad and much of its right-of-way is today a rail trail. $300.

A $500 reward for a killing in 1877 was a lot of money, a sign that the victim was somebody of importance. Johnny Slaughter was a popular stage driver running the route from Deadwood, Dakota, to Cheyenne, Wyoming. What made him particularly notable was that his father was the Marshal in Cheyenne. His killer was not aware of this. A group of highwaymen held up the stage a couple of miles outside of Deadwood, and one of their members had a loose finger on the trigger. Not even his fellow bandits approved. Item 67 is a reward poster, Territory of Dakota. A Proclamation. Five Hundred Dollars Reward...for the Apprehension and Delivery to the Sheriff of Lawrence County...of the Person or Persons Who Killed the Said John Slaughter... It is dated April 13, 1877. This copy was sent to Seth G. Bullock, "de facto sheriff" of Deadwood at the time, and later actual sheriff. In time, the killer was found, having been kicked out of the highway gang for a totally unnecessary killing that put all at risk. He was Robert "Little Reddy" McKimie, a killer in Utah, released from prison, who was tracked down in Ohio, escaped, was recaptured, later released, and disappeared from recorded history. $6,500.