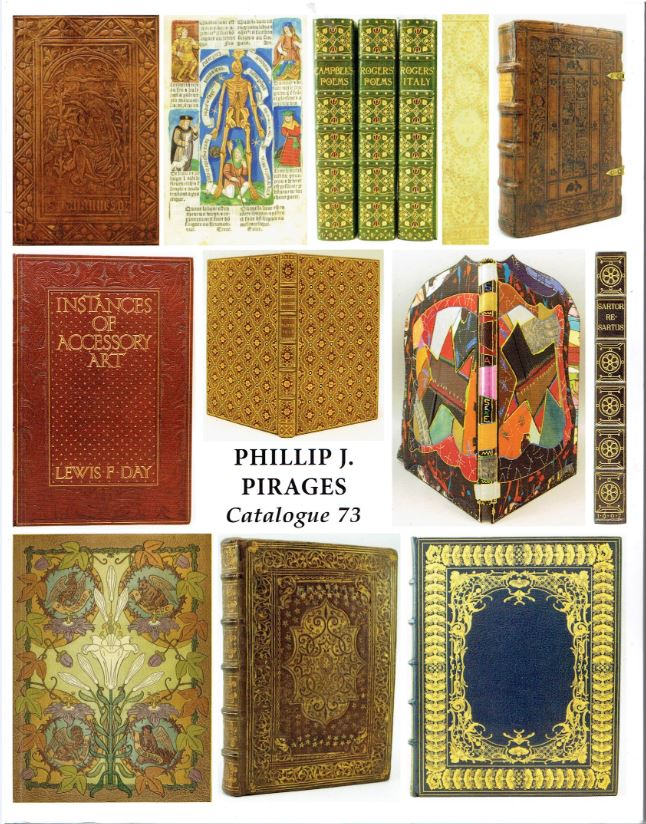 Phillip J. Pirages Fine Books and Manuscripts has published a thick catalogue of Historically Significant and Decorative Bindings from the 15th Century to the Present. Elegant bindings require illustrations to appreciate, and Pirages provides them for every book offered. We don't have that luxury. This is a textual review and graphic art mostly defies description. Fortunately, many of these books and manuscripts would be worthy of attention even if their bindings weren't so spectacular, so that is something we can mention. Still, it should be remembered that part, often a large part, of their value lies in the indescribable. Here are a few selections from this impressive catalogue.

We begin with a book that would be valuable if it were wrapped in yesterday's newspaper. It is not. The book is a first edition of the Liber Chronicarum, better known as the Nuremberg Chronicle. The author was Hartmann Schedel, with his book being published in 1493. It is a massive history of the world, up to the then present date (it was still a bit too early for an account of Columbus' journey of 1492 so America was left out). It does go back to biblical times, so some of the history is more accurate than other parts. Part of Schedel's purpose was to point out the importance of his hometown of Nuremberg in world history. Of particular note are the illustrations, 1,809 woodcut images from 645 blocks (he repeated some). Young Albert Durer helped create some. There had not been anything illustrated on this kind of scale before. As for the binding, it was fit for an almost king. It came from the library of Philippe II, Duke of Orleans. When French King Louis XIV died in 1715, he was succeeded by his great-grandson, Louis XV. The younger Louis was all of five years old at the time. He was not yet well-versed in running a government. As a result, the Duke was appointed Regent, possessing the powers of a king. He effectively ruled France until Louis XV reached a majority, age 13, in 1723. The young King had great respect for the Duke and appointed him Prime Minister, but Philippe died later that year. The binding is 18th century red brick morocco with gilt and various other decorative features. Item 51. Priced at $85,000.

Here is another kingly book. Item 64 is The Book of Common Prayer, dated 1735, and printed by John Baskett, "Printer to the King's Most Excellent Majesty." That would be the British King George II. This came in different sizes, the largest being the folio, but it appears this one is larger than the standard folio. The binding is indescribable, so I won't try. It is spectacular, done for George II. However, this copy must have been presented later by his successor, George III. The recipient was George Ramsay, 9th Earl of Dalhousie. He served the Crown in various posts over his career but in North America he is best remembered as the Governor in Chief of British North America from 1820-1828. We call the place Canada. $6,500.

This is one more from royalty, only now from the distaff side. Item 175 is concisely titled Queen Victoria. It is a look, naturally enough, at the Victorian era Queen in celebration of her diamond jubilee. The year was 1897 and Queen Victoria was celebrating the 60th year of her 63-year reign. This is an intimate biography by Richard Holmes. Rather than focusing on her stately duties, this biography is more focused on her domestic and personal life. Holmes claims the sections on the Queen's youth comes from her own personal recollections and notes. The book contains a color frontispiece portrait of the Queen with her son, the Prince of Wales and future King Edward VII. The binding, by Otto Schulze of Edinburgh, is worthy of a queen. $2,900.

Next is another book with a very fine binding but also another uncommon artistic flare. Item 112 is The Mind of Shakespeare as Exhibited in His Works, by Aaron Augustus Morgan, published in 1860. Actually, this book was mostly written by Shakespeare, even if he had been dead for over a couple of centuries by then. Pirages explains that this book takes quotes from Shakespeare's works to show his thoughts on topics ranging "from love to anger to power to earthquakes to house-building to supererogation, and much more..." Pirages also notes that these quotes may not really reveal Shakespeare's personal views as opposed to those he has given the characters who spoke the words. This copy features an early 20th century maroon straight-grain morocco binding with a floral gilt border and other features, the work of Riviere & Son. However, what is extra special about this copy is its fore-edge painting. It depicts the cottage of Anne Hathaway, Mrs. Shakespeare. The artist is the renown fore-edge painter Miss Currie. She is renown among fore-edge painters as she is just about the only one who identified herself. Unlike others, she signed her paintings. Other than that, not much is known about her personally. She was noted for her work on many of the books featuring Cosway bindings, but this one has a traditional binding. $7,500.

Item 170 is Sartor Resartus: The Life & Opinions of Herr Teufelsdroeckh. Pirages has been kind enough to translate "Teufelsdroeckh" - Devil's dung. They describe Thomas Carlyle's work as "a diatribe against current conditions in England," a supposed biography of Teufelsdroeckh. It advocates some sort of theocracy. Sounds quite strange, but that is not this book's appeal. Rather, it is notable as a work of the Doves Press and Doves Bindery. Doves was the creation of Thomas James Cobden-Sanderson. Cobden-Sanderson got into the binding business in the 1880s at the urging of his friend, the noted private press publisher William Morris. After Morris' death and the closing of his Kelmscott Press, Cobden-Sanderson decided to keep up the tradition with the creation of Doves Press. This book was published by the Doves Press in 1907. Cobden-Sanderson personally stopped binding books in 1893 as health issues affected his hands, but he continued to oversee all of the Doves Bindery productions, which provided this binding. $6,500.