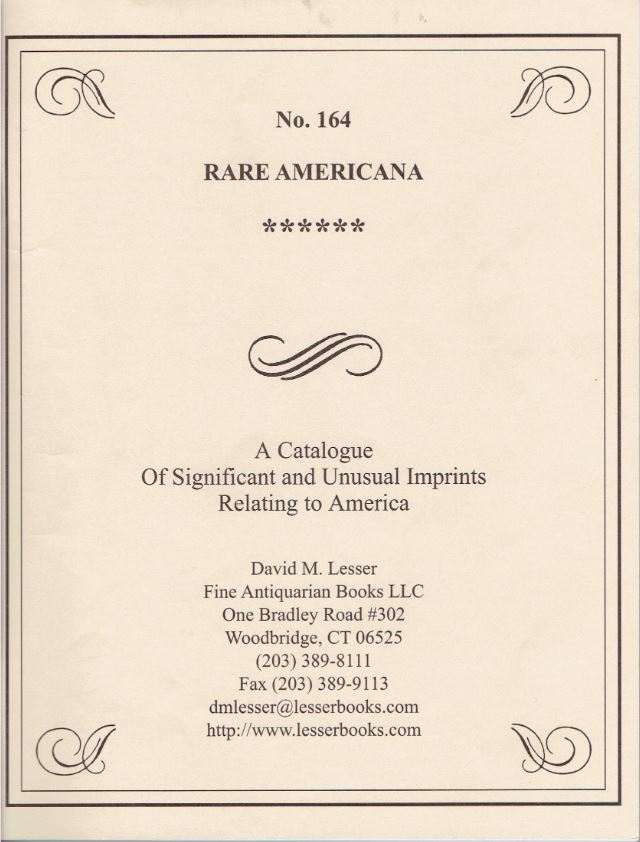 David M. Lesser Fine Antiquarian Books has issued their 164th catalogue of Rare Americana. The type of material is mostly what we expect from Lesser, but the individual items are new. Primarily, we find late 18th and 19th century material relating to America. An occasional item comes from outside those time and national boundaries. It is primarily shorter form material, pamphlets, broadsides, prints, and various types of manuscript items. Here are a few examples from this latest selection.

Since these are times of contentious politics and political corruption, it's reassuring...sort of...to know that this isn't a unique time in history. American politics has always been full of corruption. Simon Cameron was a powerful Pennsylvania political leader. He served several nonconsecutive terms as a senator, starting as a Democrat in the 1840s, then as a Republican just before the Civil War, and again in the 1870s. He also had a reputation. He was briefly a presidential contender in 1860 but threw his votes to Lincoln. He was rewarded with the position of Secretary of War. He lasted about a year before accusations of either laxity or corruption forced him out. The story, disputed by some, is that when Lincoln asked Representative Thaddeus Stevens whether Cameron was honest, the latter replied, "I do not believe he would steal a red hot stove." When Cameron demanded a retraction, Stevens denied his earlier claim in a way to imply that yes, he would steal even a red hot stove. With this as background, item 27 is an autograph letter from Cameron in 1845, while seeking his first term as senator. In it, Cameron relates to the recipient that someone had placed a lower bid than he for a government contract. Cameron says that if he had been present, they probably could have done away with the lower bid. Cameron writes that he gave up the plan to throw out the bid "for a plan to have a new advertisement, and another bidding. This I think will be done; and if so, we will get it right." In a postscript beneath his signature, Cameron adds, "There are 4 bids for $7, & one for $6.50 - the last man has agreed to back out." Always looking out for the taxpayers. Priced at $175.

How about dirty politics? That has always been fine. Attacking the candidate's wife? No first lady was ever subject to such personal attack as Rachel Jackson (well, maybe "Lock Her Up" Hillary might disagree). Rachel married Andrew Jackson almost four decades before he became President. However, she had been married to another, an unhappy, likely abusive marriage. This was out on the frontier, and she thought her husband had obtained a divorce. He filed, but did not obtain one. That made Rachel technically a bigamist and adulterer. After the issue was discovered, a divorce was obtained and she and Jackson had another marriage ceremony. This did not stop the personal attacks almost four decades later. Item 33 is Political Extracts from a Leading Adams Paper, the Massachusetts Journal, Edited and Published in Boston by David L. Child... It was published in 1828, during the campaign. The "Adams" was President John Quincy Adams, who defeated Jackson is 1824, but would lose this election of 1828 to his rival. Among the comments in this piece is one which says, "Who is there in all the land that has a wife, a sister or daughter that could be pleased to see Mrs. Jackson (Mrs. Roberts that was) presiding in the Drawing-Room at Washington. There is pollution in the touch, there is perdition in the example of a profligate woman..." Rachel Jackson died shortly before her husband took office, and he blamed the attacks for playing a role in her death. $275.

This next letter provides a heartrending portrayal of another president, one whose unpopularity was much deserved. That opinion has not been ameliorated by time. Item 75 is a letter from Harvard Professor Barrett Wendell, dated October 4, 1889, describing a meeting someone he knew had in the White House with President Andrew Johnson during the latter's impeachment proceedings in 1868. Supposedly, that person was a friend of the Secretary of the Treasury, and when the Secretary asked him his opinion of the President, he described Johnson as "impolitic but thoroughly honest." That must have been the nicest thing anyone had said about Johnson in a while, as the friend was asked to repeat the comment to Johnson personally. Writes Wendell, "I know of few more pathetic scenes than this... Ignorant, patriotic Johnson, maddened by the hounds of party politics, believing himself doomed to stand alone for what he believed right, & actually affected beyond the range of speech by the meeting with a single man who was willing to avow belief in his honesty." Wendell concludes, "I believe, he will be recognized as one who did his best." Perhaps, but if he did his best, it was not very good. Johnson became Vice-President, and then President after Lincoln was assassinated, for being an unwavering supporter of the Union from the divided, border state of Tennessee. However, that support was based on his antipathy for the wealthy plantation class, not out of sympathy for the slaves. After the war, Johnson put many roadblocks in the way of congressional attempts to protect the rights of the newly freed slaves, siding with southerners who wanted to restore conditions as close to slavery as they could get away with. He brought on his own unpopularity in the North, though he did manage to escape being removed from office by a single vote. $750.

Here's a woman who deserves credit for her originality, though not so much for her ethics. Olivia Eames was a Massachusetts native who lived for several years in New Orleans. When she returned to her home in Holden, Massachusetts, in 1839, she brought along a 13-year-old young lady. Anne was Ms. Eames' slave. Local resident Samuel Stratton and other Holden citizens sued Eames. Slavery had been held unconstitutional in Massachusetts 50 years earlier. They argued the minute Anne set foot in the state, she was free. Ms. Eames had a response. She countersued Stratton and the others. Her argument was that Anne was not a slave, but a servant, and they were attempting to defraud her of the voluntary services of her servant. Stratton countered that Anne was denied a proper education, was overtasked, beaten, and treated like a slave. After testimony by two defense witnesses. the District Attorney convinced Ms. Eames she didn't have a chance. Stratton et al. were acquitted. The case is described in the Report of the Holden Slave Case, Tried at the January Term of the Court of Common Pleas... Published by the Board of Directors of the Holden Anti-Slavery Society in 1839. Item 126. $2,500.

Next we have the Extraordinary Trial of the Rev. John Seys, Pastor of the Bedford Street Methodist Episcopal Church. New-York City, for an Alleged Assault and Battery on Mrs. Elizabeth Cram... published in 1847. Specifically, the alleged assault and battery was rape. Rev. Seys had served for 11 years as a missionary in Africa, losing four children while there (he must have been a better pastor than father). He returned to New York for his new job in 1845. Mrs. Cram attempted to press charges, but they were dismissed. She then appeared on her own before a grand jury which indicted Seys, but the trial jury acquitted him. They didn't believe the woman. However, before you feel too sorry for the suffering poor Seys endured, it should be noted that a committee of five ministers expelled him from the church for "immoral character and practices." He didn't get the job. Item 123. $600.