The Civil War from the William Reese Co. 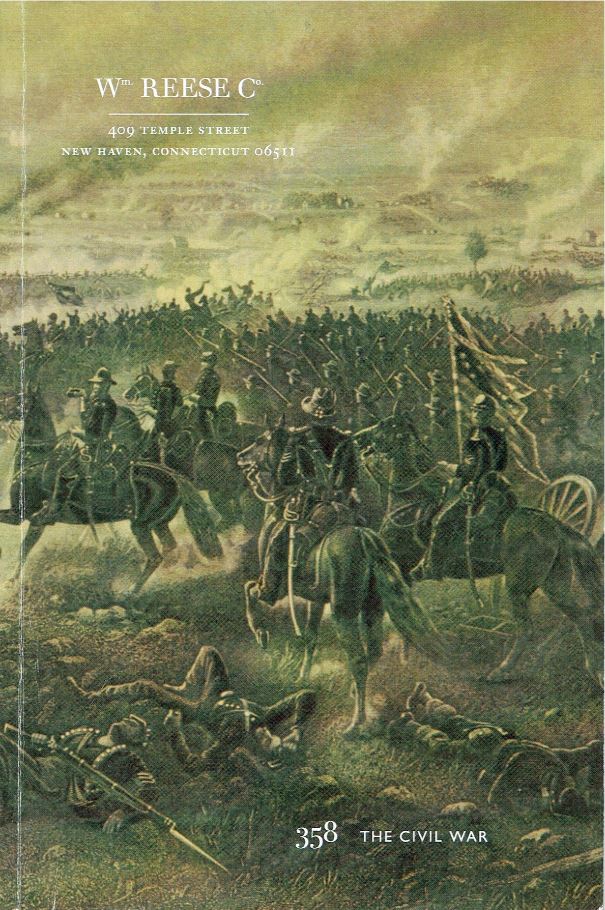 The William Reese Company has issued a new catalogue focused on The Civil War. This is the American one, with most items fitting within its time period, 1861-1865. A few come from the years leading up to it, or are reminiscences by old soldiers years later. We can look back at the heroic actions and many battles whose names still ring familiar to generations who came to be long after the war was over. However, what one also sees here is the abject horror of it all. So many died, and of those who did not, many experienced gruesome injuries that affected the rest of their lives. Fellow countrymen need to learn to manage their differences rationally and respectfully. Civil wars are hell. Here are a few selections from this catalogue.

In wartime, each side is always looking for good news from the battlefield. Such reached Confederate supporters in border state Tennessee via the Memphis Avalanche on August 16, 1861. This specially printed broadside is headed Avalanche Extra. Later from Virginia! Another Grand Victory for Confederates! It announces, "Reliable intelligence reached here to-day that a battle occurred at Leesburg, in which 300 of the enemy were killed, and the remaining 1500 taken prisoner. Loss on our side insignificant - six killed and nine wounded." That was quite a rout, but it turns out the intelligence was not so reliable. In reality, there was no such battle at all, let alone a glorious victory. Reese notes that erroneous reports of battles never fought were more common than one might think. Communications were not good in those days. Item 17. Priced at $750.

Missouri was another state with divided loyalties, and one which suffered some of the worst internecine violence as a result. It even continued beyond war's end, Confederate sympathizers reigning terror on citizens in some sort of revenge which evolved into pure criminality. It's where Jesse James cut his teeth. Nevertheless, Missouri as a state remained in the the Union. Item 132 is a broadside form loyalty oath for the pro-Union government from 1862. It is an apparently unrecorded item, this being a copy that was not filled in. The signer would swear to defend the U. S. Constitution and the pro-Union Provisional Government. In case there was any doubt about the seriousness of this pledge, the signer would attest, "I take this oath without any mental reservation or evasion whatsoever, with a full and clear understanding, that death or punishment by the judgment of a Military Commission, will be the penalty for the violation of this, my solemn oath." $750.

Item 55 gives us a human look at the toll of this war. It was printed fifty years later, but obviously Mary J. S. Moore still grieved for her long lost brothers. It is a presentation copy of an unrecorded memorial book, likely printed in a small run for family or friends of her brothers. She describes it as "containing the diary, letters and relics regarding Gilbert Lafayette Smith and Elnathan Haskell Smith, soldiers in the Union Army in the War of the Rebellion, 1864, reproduced from the originals in possession of Mary J. S. Moore and printed as a memorial to her brothers." It also has five tipped in photographs, displaying their portraits, childhood homes, gravestones, and a bible that stopped a bullet from entering Gilbert's chest. It wasn't enough. There is also a death notice for Gilbert, who died in 1866, which mentions the earlier death of Elnathan, who enlisted at the age of 15. $1,500.

Next is the longest surviving letter of one of America's worst villains ever, and he wasn't just acting. John Wilkes Booth's father was an acclaimed English actor who migrated to America with his girl friend (but not his wife) to continue his notable career. Three of his sons also became actors, two reaching high levels of acclaim themselves, Edwin and John Wilkes. Item 9 is from the time just before John received recognition as an actor, June 18, 1855. It was written to his close friend, T. William O'Laughlen. Booth writes of cutting a dashing figure and his adventures with young ladies. He then speaks of some lawyers who have managed to find rich wives. In one case, he notes that the lawyer gave a party, "but I was one of the Non Visitants. In plain English I was not invited." I wouldn't invite John Wilkes Booth to a party either. Two months later, Booth had his first theatrical role, and within a year, he was widely known. However, he was also developing southern sympathies, which became more rabid with the South's secession and Civil War. Interestingly, Edwin remained a strong Union supporter. After several unsuccessful plans to kidnap President Lincoln, John turned to assassination. The recipient of this letter, William O'Laughlen, was not involved in Booth's plan, but his brother, Michael O'Laughlen was. He was convicted and sentenced to life in prison for conspiracy with Booth. Item 9. $58,000.

By the last year of the war, things were getting more desperate for the South. This broadside dated March 11, 1864, attests to that condition, though it would not be until fall that the Union would finally break through and establish the inevitability of the war's outcome. Item 45 is headed Circular. Adjutant and Inspector General's Office...An Act to Increase the Efficiency of the Army by Employment of Free Negroes and Slaves in Certain Capacities. It is indeed getting desperate when you are seeking the people you wish to enslave to assist in the battle to put/keep you in chains. I don't know how many free Negroes they were able to convince or conscript (how many free Negroes were there in the South?). However, they were able to conscript slaves. Of course, they did not go directly to the slaves. They went to their masters. The Confederacy did have to pay for their service, but again, the payment went to their masters, not the slaves who performed the work. For obvious reasons, the Confederates were not about to arm the slaves and put them on the battlefield. Those guns might be turned the other way. Instead, they were employed in less risky tasks, such as building forts, producing arms, and transporting material. $5,000.