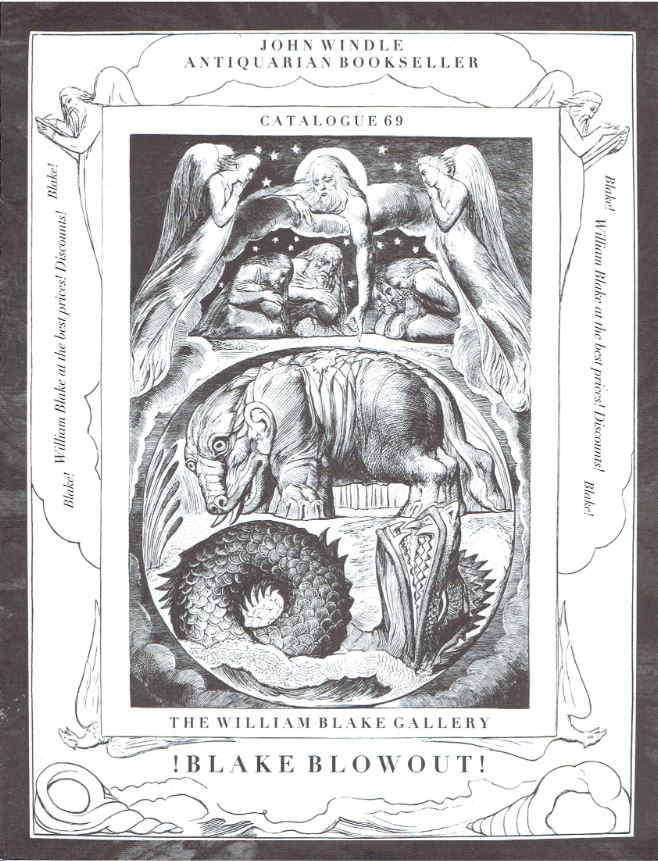 John Windle Antiquarian Bookseller has issued a catalogue titled the Blake Blowout. William Blake needs no introduction, or if he does, you are probably not a likely target for the material herein. Blake's artwork and engravings, plus his original poetry, from the turn of the 19th century, not notably appreciated in his day, a century later finally began to gain recognition. Today, his work is among the most highly prized among collectors. Poor Blake did not recognize much of a profit in his time. But, two centuries later, his fame is widespread.

John Windle is not only a bookseller, but operator of the William Blake Gallery in San Francisco. The result is his shop is an outstanding resource for Blake collectors. This catalogue is divided into several sections covering all things Blake. The first offers prints and illustrated books by Blake, some contemporary, others somewhat later. Next it goes to the Trianon Press and the Blake Trust, along with other press books. The Blake Trust, and its project, the Trianon Press, were created by Geoffrey Keynes and Arnold Fawcus to create faithful reproductions of Blake's works, at the time almost a century and a half old. They made the beauty of Blake's art available to those who could not afford an original example. Next comes an extensive selection of reference and bibliographical books pertaining to Blake. Everything you could possible know about him will be found here. Finally, there are sections of auction catalogues and exhibition catalogues pertaining to Blake, and ephemera and odes to him.

As a final note, this catalogue is labeled a "blowout" because it is a sale catalogue. Unfortunately, we received it too late for the October edition of Rare Book Monthly. The sale ended in October. That does not make the material any less interesting, and who knows, if you obtain a copy too late, maybe you can negotiate an extension. No harm in trying.

We begin with a contemporary book featuring Blake's illustrations, The Grave. A Poem, by Robert Blair. This is the first quarto edition, published in 1808. Blair was an 18th century Scottish poet. He produced only three works in his life, and the others were obscure even then. The Grave was popular in that century, though it would also be long forgotten were it not for the illustrations produced for a much later edition by Blake. Indeed, Blair never saw them, his having died 11 years before Blake was born (the first edition of The Grave was published in 1743). You could build a small collection of just pre-Blake editions of The Grave. Still, it wouldn't be of much value, as these illustrations are among the most notable Blake created. In 2016, after the original drawings were discovered after many years of being "lost," 11 of them were sold for a total of $7.1 million. This selection, item 1, which includes Blair's poem, costs a more modest $5,750.

Next, we have the first contemporary biographical account of Blake by one who knew him well, A Father's Memoirs of his Child, published in 1806. No, this was not written by Blake's father. Benjamin Heath Malkin's book may have been about his child, but what is notable about this book is the 24-page preface concerning Blake. Malkin gathered his information primarily from his own conversations with his friend. The text includes the first appearance of several Blake poems, along with a variation of The Tyger. Malkin was obviously a great admirer. As for the child, Malkin's son was evidently something of a prodigy, who died at the age of seven. Item 19. $1,500.

This is a much later edition of some of Blake's woodcuts, though they are also original. The title explains it all: Wood Engravings of William Blake. 17 subjects commissioned by Dr. Robert Thornton for his Virgil of 1821. Newly printed from the original blocks now in the British Museum. This was a limited edition printing, only 150 copies, placed in a folding box. It was published in 1977 and all copies were sold immediately. Most are now in institutions. Item 25. $10,500.

Next is one of the Trianon printings, though not the typical one. For those who would like to know what Blake and the missus looked like, this is the definitive publication. The title is The Complete Portraiture of William and Catherine Blake, published in 1977. With 51 plates, it reproduces all known portraits of Mr. and Mrs. Blake. This book was printed in 562 copies, 500 numbered regular copies, 36 Roman numeral deluxe copies, and 26 lettered copies reserved for trustees and publishers, signed by Geoffrey Keynes. This is copy "A" of the latter. Item 47. $975.

Item 207 is the first critical look at Blake. It comes from his fellow poet, but also noted critic, Algernon Swinburne. The title is William Blake. A Critical Essay. With Illustrations from Blake's Designs in Facsimile Colored and Plain. There are seven plates, five colored, two plain. It was published in 1868, just over 40 years after Blake died. He was finally beginning to get his due. Windle notes this is the "first edition, first published state of the first book of criticism of Blake." These were also the first color facsimiles of any of Blake's work. $200.

John Windle Antiquarian Bookseller may be reached at 415-986-5826 or john@johnwindle.com. Their website is www.johnwindle.com