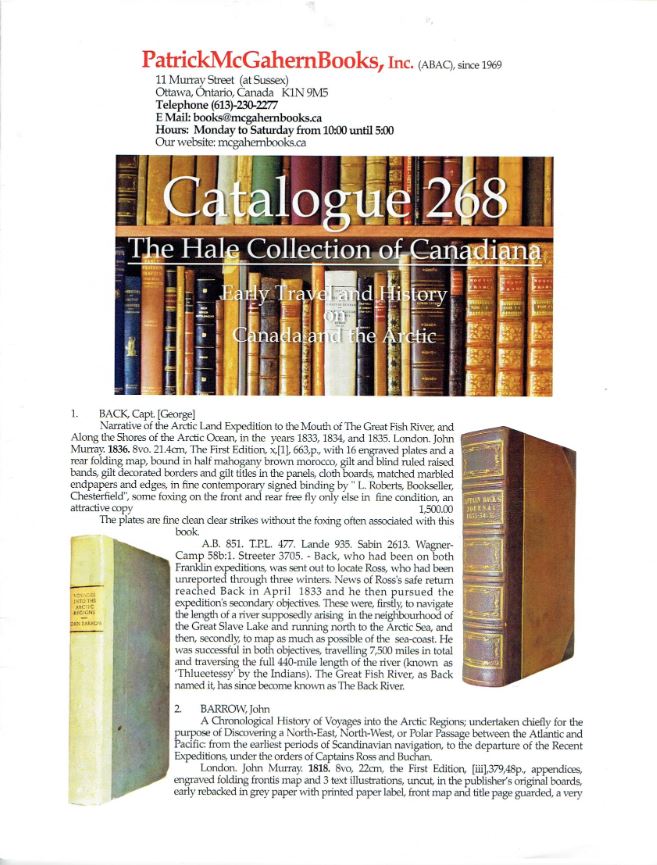 The Hale Collection of Canadiana.

Patrick McGahern Books is offering The Hale Collection of Canadiana. Early Travel and History on Canada and the Arctic. That title is overly limiting as we found a few items that seem to stick to the southern side of the American border. Others straddle it. The books do feature travel and history, the two frequently closely connected in this collection. Here are a few samples of what you will find.

In the days before the French and Indian War, much of North America was French territory. That included Quebec, the original Louisiana territory, and much land east of the Mississippi around the Great Lakes. Pierre Francois Charlevoix was a Jesuit missionary who first came to America in 1705, spending four years in Quebec. In 1720, the French government sent him back, but this time as an explorer. He traveled to the Great Lakes, then on to the Mississippi, all the way down that river to the delta, over to Florida, and back. The major interest for the French was to find an overland route to the Pacific. He asked the natives along the river if there was a route but was not able to get a firm answer. He did conclude that if there was one, it would involve traveling up the Missouri River as far as possible. Ultimately, that was the route Lewis and Clark took on their successful journey to the Pacific. It took Charlevoix 20 years to write about all the things he saw, including much about America's natives. He finally published his account in 1744, Histoire et Description Generale de la Nouvelle France... Item 13. Priced at CA $20,000 (Canadian dollars, or approximately $15,418 in U.S. currency).

One good French explorer deserves another. Father Louis Hennepin traveled to New France several decades prior to Charlevoix. He went with La Salle to the Mississippi in 1675, after the mandatory tour of the Great Lakes on the way. La Salle returned to France to raise more funds while Hennepin headed north and west. His journey took him to Fort Crevecoeur, known to the Indians as Checagou. Today we call it Chicago. He also proceeded up the Mississippi to St. Anthony's Falls, near today's Minneapolis. Along the way he traveled farther west than any European had before. Hennepin also was the first to describe Niagara Falls, and his book contains an illustration thereof. His book is A New Discovery of a Vast Country in America, Extending above Four Thousand Miles, Between New France and New Mexico; with a Description of the Great Lakes, Cataracts, Rivers, Plants, and Animals... A word of caution needs to be noted when it comes to Father Hennepin's account. It is not quite as true to the facts as Charlevoix. He tended to make things up on occasion. He also willingly borrowed from others without attribution. He claims to have gone down the Mississippi to the site of today's New Orleans but never made such a journey. He simply borrowed one of La Salle's compatriot's account. Nevertheless, there is much information about the natives and what Hennepin saw that is correct and this material was gathered for the first time by a European. This copy has only one of the two maps (the other is provided in facsimile). Item 25. CA $4,000 (US $3,085).

Next we have an account of an "expedition" from Canada across the border to the south. This was not a scientific or geographic expedition. This was a military expedition designed to quell the rebellious colonists to the south. It didn't turn out all that well for the author. Item 7 is A State of the Expedition from Canada, as laid before the House of Commons, by Lieutenant-General Burgoyne, and verified by evidence... a second edition published in 1780. Success has a thousand fathers, failure is an orphan. Burgoyne did not wish to be that orphan. Burgoyne led British troops from Canada on a mission designed to take them to the headwaters of the Hudson River, and from there to New York City, in 1777. The idea was to separate New England from the rest of the colonies. If the two parts could not assist each other, the British believed it would be easy to defeat the divided colonies. It didn't turn out that way. Burgoyne was badly whipped at Saratoga and sent back home. In his account, Burgoyne attempts to deflect the blame and put the responsibility on others for not providing him with adequate troops or supplies. CA $4,500 (US $3,459).

Next we have a look at Canada by an American, Joseph Sansom. He wasn't impressed. McGahern describes the book thusly: "Written by an American from Philadelphia who has nothing good to say about either the French or the British; the editor, for his part, has little good to say about the author." His British editor says he has allowed Sansom to use his own words, "Americanisms" which will be "a greater curiosity to those English readers, who are not aware of the deterioration which the language has suffered in the United States." One man's deterioration is another man's advancement. The title is Travels in Lower Canada, with the Author's Recollections of the Soil, and Aspect; the Morals, Habits, and Religious Institutions, of That Country. This is an 1820 second edition, which deletes anti-British chapters, and as commonly the case, is bound with Tour in Virginia, Tennessee... by Elias Cornelius. Item 47. CA $200 (US $153).

Item 60 is Life of General James Wolfe, the Conqueror of Canada... Wolfe is considered a Canadian hero, at least by English Canadians. I'm not sure how he is regarded by French Canadians. Wolfe led British troops in their attack on Quebec in 1759. It was a rout, and set up the defeat of the French in Montreal the following year. That victory effectively ended France's presence in North America. Wolfe wasn't there to participate in the celebration. While chasing French troops from Quebec, Wolfe was struck three times. One bullet hit him in the chest. Wolfe succumbed a short time later. Item 60. CA $10,000 (US $7,681).