Travels and Exploration from Hordern House 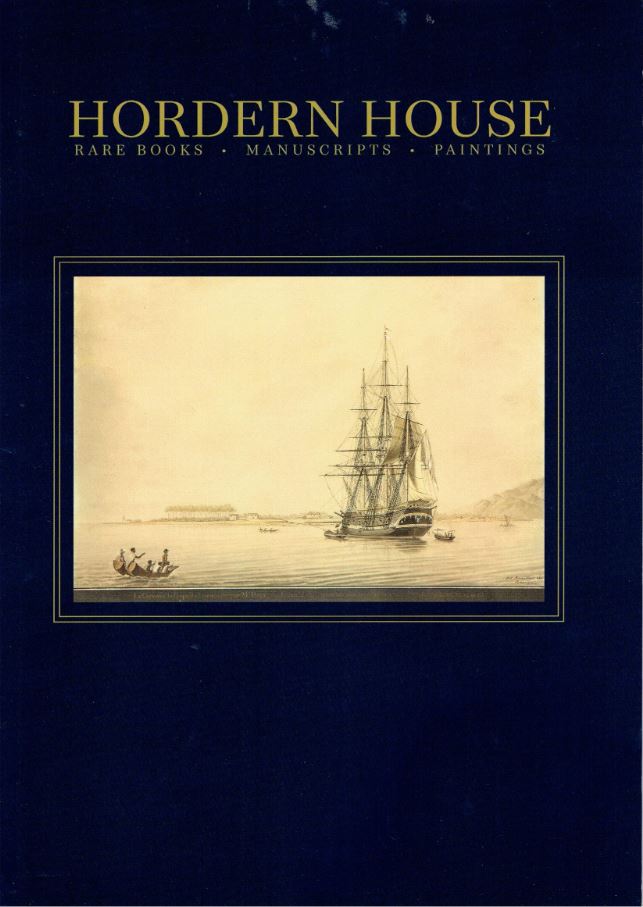 Hordern House has issued a new, though untitled catalogue. The Australian bookseller, naturally, features much material from the land Down Under, but this selection goes well beyond that. There are items from the lands up over and off to the sides. Included are several items from a time long before anyone knew Australia existed. The common thread here is travel and exploration, news about lands little known to people in Europe. These are a few selections from this collection of important journeys long ago.

First up we have a book that predates European discovery of Australia, or for that matter, America or most of Asia or Africa either. The title is In Somnium Scipionis expositio by the fifth century Roman author Macrobius. The title translates to the Dream of Scipio, and it relates to science, philosophy and thoughts from the time of Macrobius. Naturally, any printed edition would have come long after the tract was written, and as old as this edition is - 1483 - it is not the first printed edition. However, this is the important one as it contains something the earlier editions did not, Macrobius' map of the world. Only the top third is remotely accurate, and the entire western hemisphere is not present. That's all Europeans knew, not only in Microbius' time, but even as late as this printing in 1483. Europe is recognizable, as is northern Africa, and to the far east, recognizable only because it is named, is India. The northern most part of Europe is named "Frigida," for obvious reasons. Most of the continent is in a temperate zone, but inland northern Africa, where the Sahara is located, begins an area called "Perusta," or burnt up zone. Below the Sahara (Africa is but a narrow peninsula) is a large ocean. In those days, it was believed this area was so hot that no one would ever be able to cross it to see what is on the other side. That didn't stop Macrobius from displaying what is there. It is a large continent, and it too has a frigida, temperate zone, and perusta. The reason people believed there was a large continent down there, though they would never be able to see it, was that it was thought the earth must have a southern land mass to balance the northern one. Though these beliefs were many centuries old, they were about to be destroyed as by 1483, early Portuguese explorers had sailed part way down the west side of Africa, heading into the zone where it had been thought they would burn up. Item 30. Priced at AU $215,000 (Australian dollars, or approximately $155,690 in U.S. dollars).

Here is an indirect look at those early Portuguese explorations that would sail all the way around the Cape of Good Hope just a few years after the preceding book was published. We say indirectly as it was part of an oration designed to impress the Pope with the prowess of Portuguese King Joao II (or John II). The title is Oratio de obedientia ad Innocentium VIII, an oration of obedience to Pope Innocent VIII. Speaking on behalf of the King was Vasco Fernandes de Lucena, the publication being between 1485-1488. Fernandes was a physician and historian and part of the Portuguese court. In speaking to the Pope, he mentions Portuguese explorations in Africa, and of Asiatic kingdoms barely known to Europeans he claims are but days away from explorations already conducted. The world was about to rapidly expand. Item 16. AU $67,500 (US $48,851).

This is one more from antiquity. Item 24 is Periocha viginti librorum Antiquitatis Judaicae... This is a 1513-1514 edition of Jewish Antiquities with History of the Jewish War by Flavius Josephus, written during the first century. Josephus was the Jewish historian who found favor with the Roman Emperor and was able to serve him in Rome, while maintaining a fair degree of loyalty to his people. He is a controversial figure, particularly among Jews, and some of his writings may be less than objective, perhaps some fabricated by later transcribers. Nonetheless, it provides much information about Jewish history up through the destruction of the temple in the year 70, particularly on the war that led to that event. Much of this would be unknown without Josephus' writings. He also provides the only non-biblical contemporary references to Jesus, though brief and some have questioned the authenticity of these comments. AU $7,850 (US $5,697).

Next is one of the rarest books from Capt. James Cook's voyages to the Pacific, one that is not just pages but contains artifacts from the South Sea islands. The title is A Catalogue of Different Specimens of Cloth collected in the three voyages of Captain Cook to the Southern Hemisphere, prepared by Alexander Shaw. This is the second issue (1805-1806), expanded to include an additional 17 specimens, bringing the total to 56. The cloth is known as tapa, and it is produced by pounding the inner bark of certain trees until it spreads thin and wide. Various steps are taken to turn it into cloth, and then it is decorated, generally with different patterns using colored dyes. Of the 68 known copies of this book, only 8 are of the second issue. Additionally, many copies have had some of their samples removed or parts snipped off. This one is complete. Item 11. AU $370,000 (US $268,443).

This is an account of a remarkable overland journey through the wild interior of Queensland, Australia, in 1845-1846. German explorer Ludwig Leichhardt led an expedition from Brisbane into completely unknown territory in October of 1844. After many months with no word from the party, it was assumed that they had perished. Then, to everyone's surprise, they showed up 14 months later at the far northern military base at Port Essington. They had traveled over 3,000 miles in what was obviously not a direct route. Item 27 is Leichhardt's account, Journal of an Overland Expedition in Australia... published in 1847. Despite the harrowing experience, a year after his return, Leichhardt was back at it again, mounting an expedition to cross the continent east to west. It was cut short after only 500 miles by heavy rain, disease and famine. Leichhardt was an intrepid explorer. In 1848, he set out for the west coast again, and this time, he really did disappear. One hundred seventy years later, it is still one of Australia's greatest mysteries. None of his men were ever found. This set of Leichhardt's books includes the separately issued, but intended complementary three Arrowsmith maps. AU $14,750 (US $10,697).