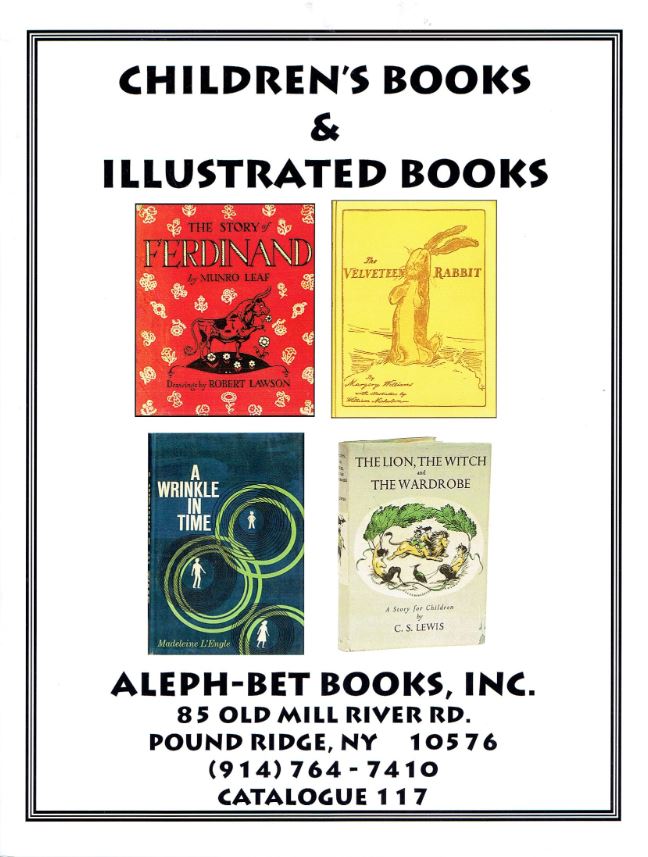 The latest from Aleph-Bet Books.

Aleph-Bet Books has issued their 117th catalogue of Children's Books & Illustrated Books. Almost all qualify as both, but there is an occasional title not entirely for the kids. Still, there must be 340-something of the 353 items in this catalogue that are for the children and are richly illustrated. Here are a few samples of what can be found.

We will begin with a book that was very popular in the late 19th century, and started a fashion trend that was equally popular at the time, though no one would want to look this way today. The book is Little Lord Fauntleroy by Frances Hodgson Burnett. Offered is a first edition, first issue, with the Divinne Press imprint, from 1886. It is the story of a young boy, being raised in America, who discovers his grandfather is an English lord and he is the only heir. He is brought to England where he learns to be a proper lord, while his grandfather learns to be more sympathetic to people less fortunate than himself. In the process, the little lord learns to dress in a lordly manner, his clothing starting a fashion trend for young boys that became popular in England, but even more so in America. It included such things as velvet jackets, ruffled collars, and knee breeches. Most young boys would not want to look anything like this today, but the gay 90s were a different time. This copy comes with a letter from Burnett to a friend which closes with the line, "I daresay you know that I have the greatest objection to interviews which are of a personal nature but one's books are purely impersonal." Item 56. Priced at $1,200.

Here is a book that is not so much a children's book as it is one for ages young (but not too young) to adult. The title is Old Santa Fe Trail: The Story of a Great Highway. The author is Col. Henry Inman, the publication date 1898. The trail wasn't quite so old then, its heyday running through much of that century. It covers the times of travel and trade along the trail to Spanish America, relations with Indians, later westward expansion by Americans, reminiscences of Kit Carson, and some Indian battles. Some of the illustrations were created by Frederick Remington, and the book has a preface by William "Buffalo Bill" Cody. This copy was inscribed by the author to Mary Mapes Dodge, the author of Hans Brinker. Item 185. $500.

This is another book not for children, though perhaps youth in their teens as well as adults could have learned from it. However, there is a children's book connection as this is the first book from one of the greatest children's book authors and illustrators of the twentieth century, Maurice Sendak. Sendak was only 19 years old when asked to illustrate this book written by Maxwell Leigh Eidinoff and Sendak's high school physics teacher, Hyman Ruchlis. This book was written at the dawn of the atomics age, not that long after Hiroshima, but the focus was on peaceful uses of the technology. The title is Atomics for the Masses, and if there is something more frightening than a Wild Thing, it is atomics in the hands of the masses. The book was published in 1947. Item 296. $600.

Here is an unusual book. The title is The Slant Book, by Peter Newell, published in 1910. Newell was noted for his humorous writing and illustrations. He wrote one book with a hole in it to show the path of a bullet; another which could be viewed either normally or upside down. In The Slant Book, the book itself is slanted, as are the text and illustrations. It is the story of a runaway baby carriage which rolls down the slanted pages. This copy comes with the rare dust jacket. Item 232. $3,000.

Next is an alphabet book, one tied to what was considered a heroic, patriotic struggle at the time, the Spanish-American War. The title is Army & Navy A.B.C., undated but circa 1897. I'm not sure what was used for most letters, but "R" is doubly obvious. Both Theodore Roosevelt and the Rough Riders fit there. Not as obvious is "J," which "Stands for Joy / That the Cubans now feel / To be free, and from under / The proud Spaniard's heel." Ultimately, they didn't much like being under the Americans' heel either, which led to problems later on. Item 2. $1,200.

This is a Lewis Carroll book that doesn't have the name "Alice" in its title. Rather, the title is Phantasmagoria and Other Poems. It was published in 1869, between the two Alice books. This copy is inscribed "Mary C. Dodgson, with the author's love. Jan. 1869." According to Carroll's diary, he sent out 28 copies of the book in January 1869 to friends and family. This must have been one. Mary Dodgson was his sister, and they were close. Her son wrote the first biography of his uncle. "Lewis Carroll" was just a pen name of mathematics professor Charles Lutwidge Dodgson. Item 60. $4,750.