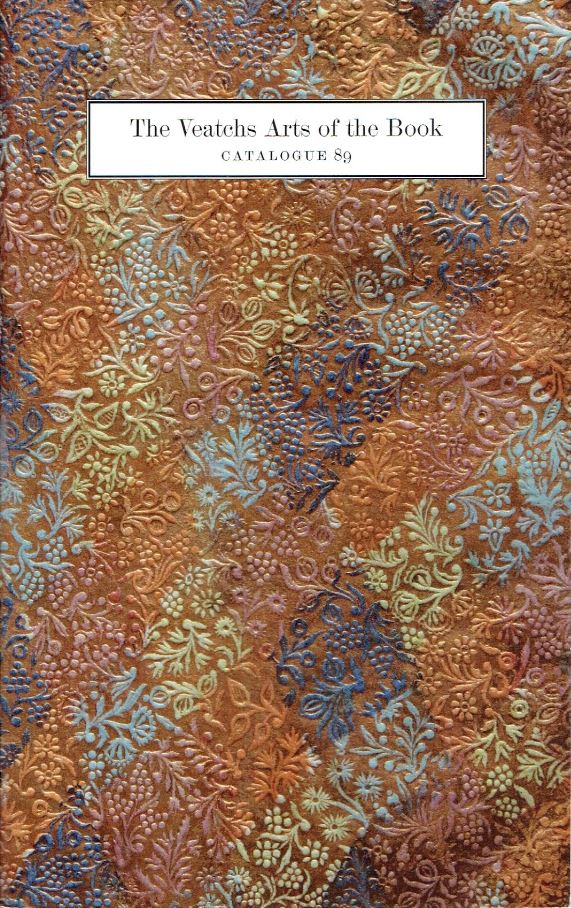 The Veatchs Arts of the Book has issued their Catalogue 89. Since their name gives away what sort of material you can expect to find in the catalogue, we will get straight to some examples. The material in some way or other relates to the book arts, but there is a wide variety of items within this category.

We begin with a book that is not a first edition, but is what the Veatchs describe as "undoubtedly the finest printed edition of Eliot's work." That work is Four Quartets, originally published in 1943. This is a 1960 edition by Faber and Faber. The two Fabers was the house where Eliot served as director and was employed most of his working life. This edition features quarter vellum with marbled boards, the top edge in gilt, and a marbled slipcase. It was printed at the handpress of Offcina Bodoni, in Dante type on paper by Fratelli Magnani. The result is you may see it listed under the publishing house location, London, or that of the printing, Verona. The edition was printed in a limited run of 290 copies and was signed by Eliot. This is copy number 193. Item 15. Priced at $3,500.

Item 43 is a collection of broadside monthly calendars printed by the Marchbanks Press. Marchbanks printed these calendars as promotions for their business from 1915-1936 and during a brief revival in 1951. Each year they would select a different designer to create the calendars for that year. This collection is not complete, but contains 202 of the calendars, including complete years for 1925, 1927-1930 and 1933. Five other years have 11 calendars. $850.

A man who got his start as a salesman for Marchbanks Press in the 1920s was Joseph Blumenthal. However, Blumenthal quickly became tired of standard press work and determined to learn more about fine presses. While still employed by Marchbanks, in 1931, he opened the Spiral Press. He did fine work for clients such as the Limited Editions Club, the Museum of Modern Art, and President Franklin Roosevelt. He closed it for a few years during the Depression and again during the Second World War, but for the most part continued in the business until a final closing in 1971. Lessing J. Rosenwald was also noted for his connection with books, though he was neither a printer nor publisher. Rather, he was a collector. Rosenwald's father was Chairman of Sears, Roebuck, in the days when it was still America's premier retailer, and Lessing succeeded him in that position when he died. Obviously, the Rosenwalds must have made quite a fortune as Lessing retired in 1939 at the age of 48, to devote his life to book collecting and charitable activities. All of this serves as introduction to this self-explanatory 9" x 11" broadside printed by the Bird & Bull Press. It reads, "To all bookmen, collectors, printers of books, librarians, and bibliomaniacs in general. Greetings. Know you that this paper was made from Lessing J. Rosenwald's shirt and Joe Blumenthal's sheet, as a memento of their visit to the Bird & Bull Press, March 14, 1973." I'm reluctant to call this "rag paper" considering the nobility of these two gentlemen, but it is a unique example of papermaking. Item 6. $500.

Here is another tribute. The recipient was Robert L. "Doc" Leslie. "Doc" wasn't just a nickname. Though Leslie is best known for his work with typography, he was also a medical doctor. He worked in the printing business to pay for his college tuition, including a stint with Theodore DeVinne. He then went to work as an industrial physician for the publisher McGraw-Hill (I never knew publishers had house physicians). He next began work on the side developing new technology for typesetting, which led to a long career in the business. Item 76 is A Garland of Tributes to Robert Lincoln Leslie for his 100th Birthday, published in 1985. This was not a posthumous tribute. Leslie was still around to enjoy it. The lot consists of 20 printed tributes from individuals and private presses, mostly broadsides, along with a large booklet entitled A Brief Chronology of Printing, 1885-1985, as Experienced or Witnessed by Dr. Robert Lincoln Leslie, by Herbert Johnson. Leslie lived to be 101. $150.

Item 84 is a collection of six woodblock engravings of Philadelphia scenes from the 1860s-1870s. The places depicted are Independence Hall, Girard College, Girard Bank, Merchants Exchange, Fairmount Water Works, and a shipyard. All are signed on the back by N. J. Wemmer, who prepared box wood for engravers. Two are signed by "Frazer." It is not clear who Frazer was, but the Veatchs have two possible suspects. $1,800.

Next is a triptych entitled Ginsberg's Farm, published by the Caliban Press in 2006. The two outer panels feature a pair of Tibetan deities. The center panel displays a poetic tribute to Allen Ginsberg. It opens to show a previously unpublished silver gelatin photograph of Ginsberg in his garden, holding a large melon. It is housed in a paper portfolio also containing a vial of earth taken from Ginsberg's garden. You will have to take their word on that last one. Item 10. $375.