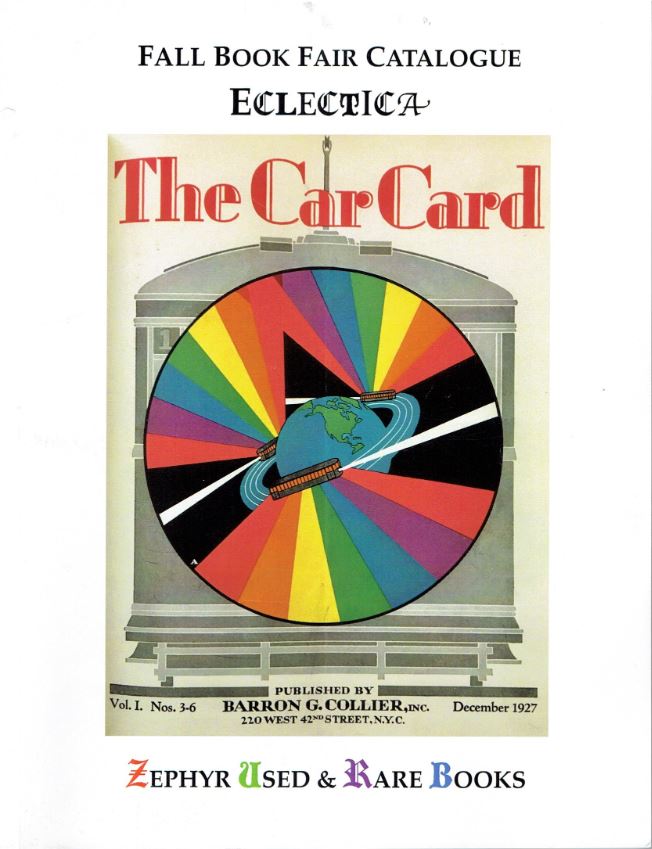 Zephyr Used & Rare Books has issued their Fall Book Fair Catalogue. Immediate impressions to the contrary, the title is not "The Car Card." We will get to that in a moment. The title is Eclectica. That is most accurate as Zephyr provides a large selection of the rare and unusual. They note that while this list is not exclusive, topics supplying many representatives include advertising, fashion, travel, photographs, vintage paperbacks, big game hunting, space program, and real estate. About the only common thread I can find between those is that they are all found in this catalogue. With that, we will list a few examples of these eclectic items found in this latest Zephyr selection.

We will begin with that strange looking image on the cover. What is a car card? Turns out it isn't quite as futuristic as it looks. Car cards were advertising cards placed on street cars, subways, and trains. They would slide into frames on the walls, sometimes ceilings, of these transportation vehicles. Offered are 17 issues of The Car Card. A Magazine of Street Car Advertising, along with a folding map of locations, with clever illustrations for various states (oil wells in Los Angeles, a cattle drive in Kansas, salmon and sawmills in Oregon, cotton picking in Louisiana). The issues run from July 1927-June 1929. They contain hundreds of illustrations of card cards in color, others in black and white. Many are for local businesses, others long forgotten, but some advertisers are still familiar, such as Lucky Strike, Victor, and Budweiser, the latter offering barley malt syrup, not beer (this was still during Prohibition). The publisher was Barron G. Collier, Inc. Barron Collier was an enterprising Memphis printer who developed the business to create work for his printing plant. It quickly became something much bigger. The company became the largest advertising enterprise in the country, with offices in 70 cities serving transportation systems in over 1,000. Collier developed a standard card size, 11" x 21", so that they would be interchangeable throughout the country. Collier used his financial success to invest in Florida land, at one pointing owning over a million acres. Item 1. Priced at $550.

Item 82 is an album of Photographs of the World's Columbian Exposition, held in Chicago in 1893. One of the most notable of world's fairs, held to celebrate the 500th anniversary of Columbus' major discovery, it was noted for introducing many new inventions to the public, such as electric lighting. Here is something I didn't know about this fair. You were not allowed to bring cameras inside. You had to check them at the gate. This meant that if you wanted souvenir photos, you had to buy them. This is one of those albums. They were not all alike. Along with pre-prepared albums you could pick the photographs you wanted and have them assembled in a personalized photo album. This one contains forty-one 7 x 9 mounted images by photographer E. R. Walker. It contains pictures of many pavilions, the cowboy and Indian on horseback statues, the Nina and Pinta, fisheries, manufactures, art, agriculture, transportation, and the Midway. In the background of the latter is George Ferris' giant wheel. It could accommodate 2,160 riders at one time. $1,750.

Next we have the story of a remarkable woman, Wheels West: the Story of Tabitha Brown, by Evelyn Sibley Lampman. It was published in 1965, but the events recounted happened a century earlier. Mrs. Brown was one of the early travelers of the Oregon Trail, crossing in 1846. That is quite an accomplishment, though not unique. What was even more extraordinary about the widow Brown's journey was that she was 66 years old at the time. Her son had made the trip a few years earlier, and came back to lead his mother and other relatives back to Oregon. Once there, Mrs. Brown started a home for orphans, and with the help of a local reverend, they opened the Tualatin Academy. A few years later, the name was changed to Pacific University, which today operates three campuses in the state of Oregon. Item 126. $100.

It was reputedly the largest motel in America during the days when automobile travel was starting to take hold. It was the Depression, but roads were being built anyway to facilitate travel and provide jobs. Item 20 is a flyer for the Mission Bell Motel. It was located in Daly City, California, but advertised as "a good place to stay while visiting San Francisco." The Civic Center was just 15 minutes away. In today's traffic, it might take a little longer. It featured "over 100 separate units," this being the day when motels had separate units, rather than rooms in one large building. You could still park right outside your door. This piece unfolds to reveal a large map on one side, a birds-eye view of the motel on the other. It was printed in 1932. The Mission Bell was finally torn down in 1994 and its location now holds Mission Plaza. $50.

If you are looking for an account of the greatest events in history, or at least as so perceived in 1932, item 145 is Great Moments in History, by Alfred Parker, illustrated by Samuel Nisenson. It features a page for each event, each having both a description and a drawing by Nisenson. It begins with the Exodus and concludes with Lindbergh's flight across the Atlantic. In between, we find 3,000 years of history, from the good (the founding of the Olympic Games, Lewis & Clark, etc.), to the bad (the Hamilton-Burr duel), to the ugly (introduction of slavery to America). Fortunately, they also recount the freeing of the slaves. Item 145. $150.