Custer and the West from Old West Books 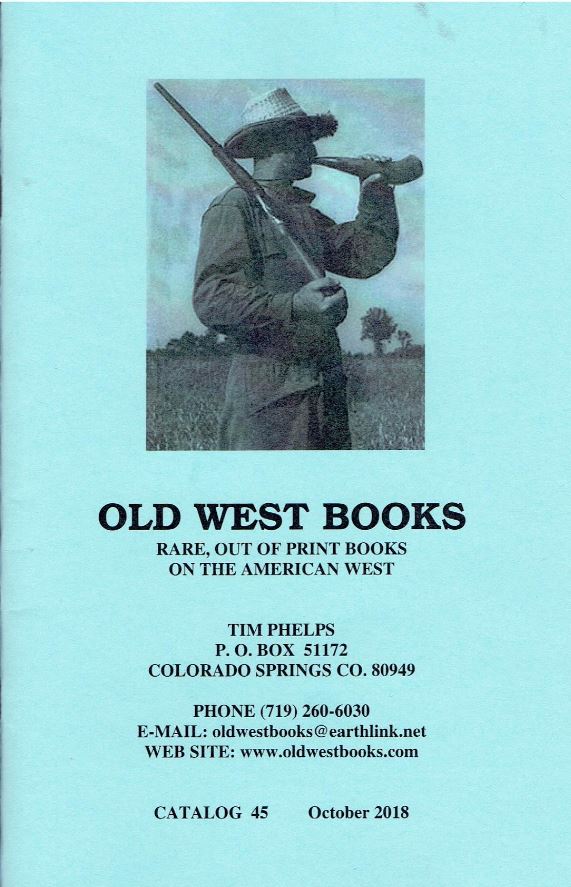 Old West Books has released their Catalog 45 of Rare, Out of Print Books on the American West. They have succinctly described it as "Mainly a Custer and western military theme with a few rare titles and many unique items." Surely, Custer did not die in vain. His career most likely would have been forgotten, and few books written about him, were it not for his untimely ending. Sometimes fame comes at a heavy price. Other books trace other military western events of the time, which for the most part meant fighting the land's natives. There were occasional hiccups, such as the one experienced by Custer, but the relentless taking of the land continued until its inevitable conclusion. Here are a few selections from this Custer-centric catalogue.

We will start with one of the more ironically titled books, and one of the few Gen. George Armstrong Custer got to write himself. His wife was a more prolific author, but then again she got to live another 50+ years after her husband passed on. Item 33 is My Life on the Plains or Personal Experiences with Indians. Custer had a most memorable personal experience with Indians, but naturally enough, he doesn't write of this event. This book covers his earlier experiences out west, where he was sent after the Civil War. The book was published in 1874, two years prior to Little Bighorn. Priced at $1,500.

Next up is a Custer rarity. Item 27 consists of two carte de visite photographs, one of General Custer, the other by his wife, Elizabeth Custer. Each has been signed. The one of George Armstrong Custer was taken by famed photographer Matthew Brady in 1865. The one of Elizabeth Custer is stamped on the back "Junction City Gallery of Art S. Meixsell Proprietor." $12,500.

Next we have a book with whose author undoubtedly Mrs. Custer could relate. The title is Absaraka Land of Massacre Being the Experience of an Officer's Wife on the Plains with an Outline of Indian Operations and Conferences from 1865 to 1878. The primary author was Mrs. Henry B. Carrington. Col. Henry Carrington was sent out west after the Civil War. He was charged with guarding the Bozeman Trail, a side track from the Oregon Trail that took people to the gold fields of Montana. Several Indian tribes sought to stem the flow of Americans into what they considered their territory. Col. Carrington built Fort Phil Kearny for his staging ground, but had a reputation of not pursuing the Indians aggressively. It was one of those who served under him, Capt. William Fetterman, who disobeyed Carrington's order not to pursue, leading he and his men to the fate later experienced by Custer in what is known as the Fetterman Massacre. It didn't stop the Army from removing Carrington from command. Margaret Carrington writes about their times at Fort Kearny in her book. However, as noted before, Mrs. Carrington needed some help with the later parts, up to 1878, including events such as Custer's massacre, as she died in 1870. Henry Carrington lived until 1912, wrote several books, updated this one, and married the widow of one of the soldiers who died with Fetterman. This copy was signed by Henry Carrington. Item 17. $450.

First-hand accounts of Custer's Last Stand were scarce as there no survivors. Events had to be recreated from what evidence was discovered on the battlefield. Almost half a century later, in 1922, Thomas Marquis was appointed physician to the Northern Cheyenne. He quickly came to realize there were many survivors from Custer's defeat, some still living all those years later. They were the ones on the winning side. Marquis became obsessed with recording the accounts of those eyewitnesses still around. He gathered a list of surviving veterans and began interviewing them, publishing several books and articles in the years ahead. One of them is this book, A Warrior Who Fought Custer, published in 1931. It is the result of interviews he conducted with Wooden Leg, a young Cheyenne warrior of 18 at the time he participated in the fight against Custer. However, the book is not just about the battle at Little Bighorn, but an account of his life and the customs of the Cheyenne Indians. It continues until he is an old man, working as a judge on the reservation and drawing a pension from his later days serving as a scout for the U.S. Army. Times had changed. Item 78. $325.

Henry Morton Stanley is not generally associated with America. He is best known for African exploration, his tracking down of David Livingstone, and the famous line, "Dr. Livingstone, I presume" on finding him. However, as a young man, Stanley, an Englishman with no family at home, came to America. During the Civil War, he served with the armed forces of both the Confederacy and the United States. At the end of the war, he took up journalism, and in 1867, went to the west as a reporter. It was his account of those days that he published almost three decades later, My Early Travels and Adventures in America, published in 1895. He reports on General Hancock's expeditions against the Indians of Kansas and Nebraska, writes of Wild Bill Hickok, and of George Armstrong Custer, then very much alive and building his reputation. After his return from the frontier, Stanley would be sent on his mission to find Dr. Livingstone, his adventures in America over. Item 101. $250.