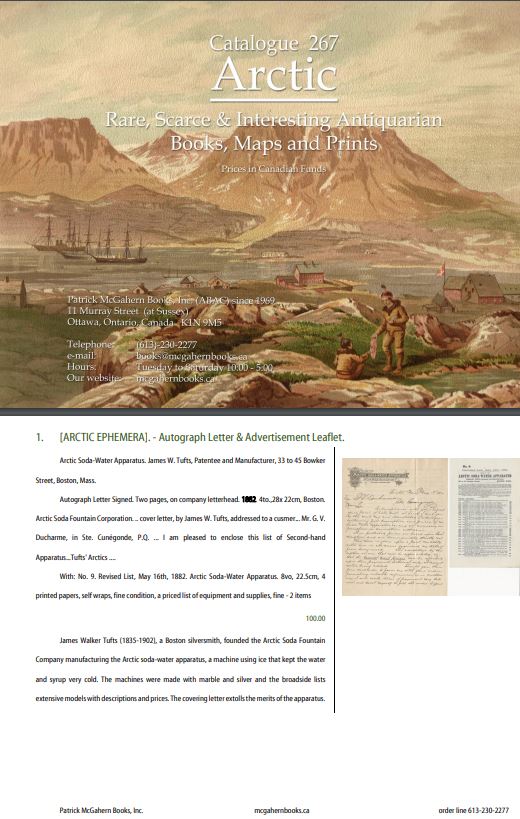 Patrick McGahern Books is offering a catalogue on the Arctic, subtitled Rare, Scarce & Interesting Antiquarian Books, Maps and Prints. McGahern is a Canadian bookseller, and most Arctic exploration, at least that conducted by the most active explorers, the English, came through Canada. The search for a northwest passage, a route to Asia that did not require going all the way around the southern tip of South America or Africa, was long a dream for them. That need was finally resolved, not by finding a navigable northwest passage but by the construction of the Panama Canal. Here are a few selections from this latest collection of the far north.

Sir John Franklin is one of the most notable of Arctic and Northwest Passage explorers, though for all the wrong reasons. He is most remembered for his final voyage, when he, his ships, and his men disappeared. It took over a decade to unravel the mystery, which, unfortunately, revealed that all had perished. However, his disappearance led to the most active time of exploration in Arctic Canada, the middle of the nineteenth century, as that is when dozens of missions, public and private, set out to find him. Most did not, but they brought back an enormous amount of new information. All of this leads us to the fact that Franklin had a career before he was lost, which is why he was in charge of his final mission in the first place. Here are accounts of two of his missions.

Franklin's expeditions were generally not a lot of fun. His first was one of the worst, exceeded only by his final one with no survivors. His first trip was mostly overland. The idea was to proceed up the Coppermine River until reaching the northern Canadian coast along the Arctic Ocean. He would then explore the coastline. He did partially achieve his goal, exploring 500 miles of coast before being forced to turn back. The problem was that they were inadequately supplied, and did not receive the degree of help they anticipated from fur trading companies and natives. The weather turned unusually harsh, and in the bad weather, the game they hoped to hunt disappeared. By the time they turned back, they were in deep trouble. In hopes of making it back sooner, they set out over uncharted territory. Food ran out, many of the men starved to death or succumbed to the cold, there was one case of murder, and Franklin became known as "the man who ate his boots." Eleven of the 20 explorers died. Item 19 is the first edition, first issue of Franklin's account of this journey, published in 1823: Narrative of a Journey to the Shores of the Polar Sea, in the years 1819, 20, 21 and 22. Priced at CA $2,800 (Canadian dollars, or approximately $2,114 U.S. dollars).

You might think Franklin would have had his fill of the Arctic after that experience, but three years later, he was back again. This was his most successful mission, not losing over half or all of his men. Here is his account, published in 1828: Narrative of a Second Expedition to the Shores of The Polar Sea, in the years 1825, 1826, and 1827, by John Franklin, Captain. Including an Account of the Progress of a Detachment to the Eastward, by John Richardson. This time, Franklin proceeded down the Mackenzie River, west of the Coppermine. He was better supplied. From the mouth of the Mackenzie, Franklin proceeded west, hoping (unsuccessfully) to meet up with Capt. Frederick Beechey, proceeding from Point Barrow, Alaska. Franklin almost got that far. Meanwhile, Richardson traveled east, reaching the Coppermine River. In all, they explored 1,200 miles of previously uncharted coast. Item 20. CA $3,000 (US $2,267).

While Franklin was proceeding along the coast, searching for a northwest passage by land, William Parry was attempting to find such a route by boat. Unfortunately, a shipwreck cut his mission short. However, he would be back again soon, except this time he was attempting to reach the North Pole. Parry didn't find the Northwest Passage, and he didn't reach the North Pole, and yet his accomplishments were still quite remarkable. They hoped to use wheeled boats, but the wheels did not work on the broken ice. Attempting to haul the boards was also less than a success on the rough ice. Rather than the anticipated 13 miles per day, they managed only seven. Meanwhile, they discovered the ice was drifting south, further reducing their progress. They were eventually forced to turn back. However, the latitude of 82 degrees 45 minutes was the farthest north anyone had traveled up to that point, or would travel for almost another 50 years. Item 46 is Parry's account, Narrative of an Attempt to Reach the North Pole, in boats fitted for the purpose, and attached to his Majesty's ship "Hecla"... published in 1828. CA $3,500 (US $2,642).

Traveling along the Mackenzie River wasn't quite as difficult a century after Franklin, but it was no picnic either. Item 7 consists of two photographs taken circa 1930s captioned on the back, Handling Royal Mail on Mackenzie River in a Blizzard. It shows a man, a dog sled in front of him, perhaps mail sacks on board, in what are close to white-out conditions. Behind him is a Fairchild FC-2 aircraft. Airmail service into the Arctic began in 1929, and these planes were the choice for travel in remote northern areas. Still, this plane looks snowbound and it is not obvious to me how they got it out of there. CA $50 (US $37).

Item 10 is a broadside headed All About Alaska And The Klondike Gold Fields. It promotes, "A Grand Illustrated Klondike Lecture Entertainment... A most interesting and instructive lecture will be given, describing the frozen Northern Country, Its People, Their Methods of Living, the Newly Discovered Gold Fields, Their Fabulous Wealth, How to Reach Them, a Description of the Different Routes, the Expense of the Trip, etc." It was illustrated with magic lantern slides, "illuminated by an intense light, magnified by powerful lenses." It concludes, "We promise you a royal entertainment." The date and place of the lecture are blank, this being an unfilled promotional piece. It would have been printed circa 1898-1900. CA 650 (US $489).