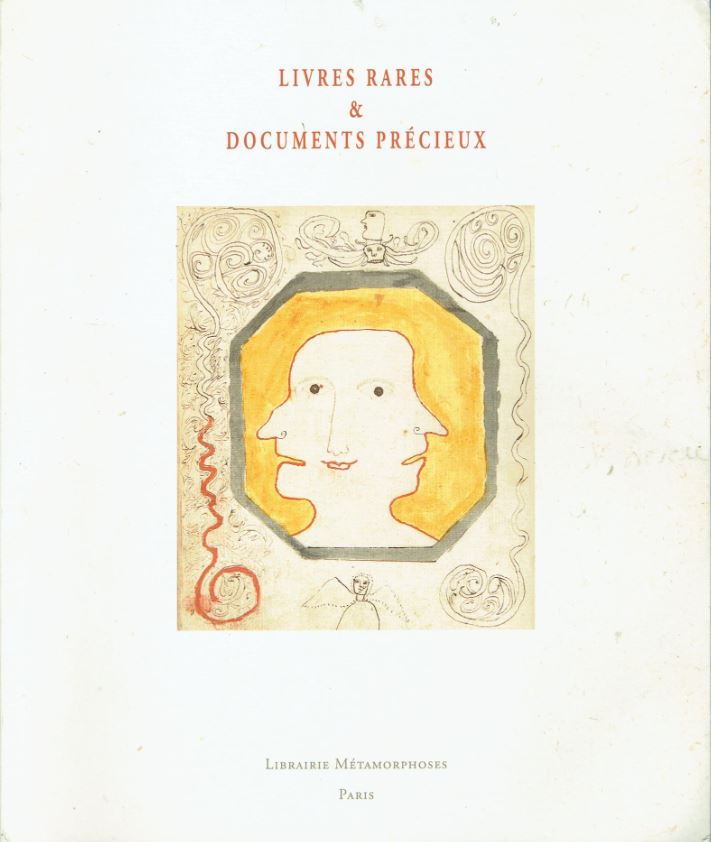 Librairie Métamorphoses of Paris has issued a catalogue of Livres Rares & Documents Précieux. In English, that is Rare Books and Valuable Documents. Inside, the title page states more specifically (translated), valuable or unusual autographs, music & photographs. That leads to the obvious point - this catalogue is entirely in French. Not so obvious is that this reviewer has at best a most superficial understanding of the language. It is hard to describe items adequately from a reading that amounts to comprehending a few familiar words. I encourage readers who understand French to seek out the catalogue for themselves. The items are also primarily in French, but not exclusively so. Other languages appear, including several items in English.

We begin with what has generally been acknowledged as the finest European work on China of the 18th century. This is the 1735 first edition which was in French. The title is Description Geographique Historique, Chronologique, Politique, et Physique de l’Empire de la Chine et de la Tartarie Chinoise. The writer, or perhaps compiler, was Jean-Baptiste Du Halde, a Jesuit priest. Oddly, Du Halde never set foot in China. What he had were the accounts of 27 Jesuits who did travel there, along with information from others. This is a thorough book, covering subjects including geography, political institutions, history, education, medicine, science, language, and customs. There are 43 maps and many images within the four volumes. Additionally, it provides an account of Bering's voyage. Bering visited Kamchatka and Alaska. This was the first European description of Alaska and Bering's map was the first of what is today an American state. Item 24. Priced at €28,000 (euros, or approximately $32,748 in U.S. dollars).

Next we have a handwritten and signed poem by Guillaume Apollinaire. Apollinaire is the French surrealist writer, coiner of that term. The word first appeared in his drama, Les Mamelles de Tiresias, Drame Surrealiste... Apollinaire wrote this poem in 1917, just a few months before his surrealist drama. The poem's title is Le Pont, The Bridge. The bridge is a figurative, rather than a literal one. In the poem, two women speak across a river, forming a bridge of words on which others pass. I will not try to interpret its meaning any further. I struggle to understand the meaning of any poetry, let alone the surrealist variety. Apollinaire has signed his name at the bottom of the poem. Item 3. €18,000 (US $21,039).

Here is a set of books created for a certain privileged individual, though copies were available to the public, or at least those who could afford it. Item 75 is OEuvres de Jean Racine Imprimé par ordre du Roi pour l'éducation de Monseigneur le Dauphin, published in 1784. These are the works of Jean Racine, a five-volume set ordered up by King Louis XVI for the education of the Dauphin, Louis-Joseph. The Dauphin is the equivalent of a prince, though not just any prince, but the heir to the throne. Louis-Joseph was the first-born son of Louis XVI and Marie Antoinette. Normally, that would be a wonderful standing for a child of three, as Louis-Joseph was in 1784. However, the French Revolution was not far away, and both Louis XVI and Marie Antoinette would have their heads lopped off in another decade. Louis-Joseph was spared that ending. He was a sickly child, and unbeknownst to his family, he suffered from tuberculosis. He died from the disease a few months before the storming of the Bastille and the onset of the Revolution that would take his parents' lives. His younger brother succeeded him as Dauphin, only to die under unclear circumstances during his brutal imprisonment in the Revolution. €3,500 (US $4,079).

This is one of those books in English. Many books have been equaled if not surpassed in fame by their film adaptations. This is the only one I know of where this is true of a radio program. Item 100 is The War of The Worlds, by H. G. Wells. It is a first edition, published in London in 1898. It is the tale of an invasion by Martians. Many evidently thought such an event possible in 1938, though such seems impossible today, unless it is by some insidious virus brought home on a spaceship. While Wells and his story were based in England, the 1938 radio adaptation for which this book is known was made in America, where listeners heard an account of Martians landing and thought it was actually happening, rather than being a radio play. €2,000 (US $2,331).

Frank Lloyd Wright is likely the best-known American architect, not only of his era, but of any time. Those fortunate enough to live in one of the residences he designed would have been an unusual lot, unusual, in particular, in their wealth. However, Wright wanted to spread the beauty to those not so fortunate, so he teamed up with several corporate partners to provide goods regular folks could add to liven up their homes. They produced such items as furniture, paint, rugs, accessories, and this one - wallpaper. For this, he teamed up with F. Schumaker & Co. to produce Schumaker's Taliesin Line of Decorative Wallpapers. The Taliesin name came from the name of his estate in Wisconsin, though by the time this item was created (1955), he also had a Taliesin West outside of Phoenix. This piece was evidently a sample book as it contains 26 specimens of Wright's wallpaper. Item 101. €6,500 (US $7,575).