The Struggle for North America from the William Reese Company 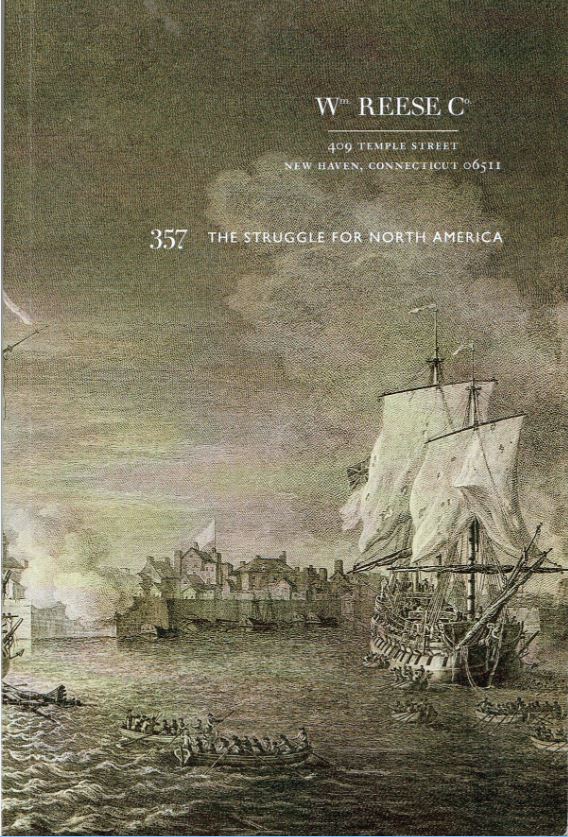 The Struggle for North America.

The William Reese Company has released a catalogue of The Struggle for North America. Most of the material here ranges from the early 18th century to the days leading to the American Revolution. The Spanish and Native Americans play roles in this struggle, but the major participants were the British and French. They were always fighting, all over the world, and North America wasn't immune to their rivalries. Ultimately, the English won, though the French did have a last laugh when they teamed up with the American colonists to throw out the British, just as they had done to the French a few years earlier. Not everything herein pertains to the struggle between nations. Some concern the struggle to tame an untamed land, others the fight for knowledge. Life is a struggle, but then again, it would be dull if it were too easy. Here are a few items from North America's early days of settlement.

In the first half of the 18th century, the British and French generally understood the boundary north and south along the Atlantic coast, today's U.S.-Canadian border. Once they got inland, the borders became murky, the battles more frequent. Usually these fights were in the Great Lakes region, but here we see how confrontations could arise anywhere within the continent. The title of this 1741 polemic explains the issue: A Description of the English Province of Carolana, by the Spaniards Call'd Florida, and by the French, La Louisiane...Demonstrating the Right of the English to that Country, and the Unjust Manner of the French Usurping of It. This fourth "edition" is actually a fourth issue as all three subsequent ones used unsold sheets from the 1722 first edition. The author was Daniel Coxe. He lived in the American colonies for much of the early part of the 18th century and traveled through Carolana, or Carolina if you will. This is one of the earliest descriptions in English of this land, which back then encompassed not only the Carolinas, but much of Georgia, Florida, and Louisiana. The map is the first English map to show the Mississippi valley, and eliminated the nonexistent mountain ranges along the Mississippi River displayed by earlier maps. It should be noted that Coxe had an ulterior motive in this. While also holding substantial amounts of land in Jersey, Coxe's father had purchased the rights to an enormous grant given by King Charles in the early 17th century when the area was a wilderness. On his map, Coxe shows Carolana extending not only to the Mississippi River, but the other side as well. The French were having nothing to do with this claim. Ultimately, Coxe never gained control of the Carolinas, though he was given land in upstate New York instead. Item 27. Priced at $8,500.

The major boundary disputes would be settled by the French and Indian War, and the French would be the big losers. The outcome was fairly well settled by 1760, but in 1762, the French achieved one last surprising victory. They seized St. John's, Newfoundland, from the British. Field Marshall Sir Jeffrey Amherst responded, sending troops led by his nephew William Amherst to regain control of Newfoundland. Item 9 is a recruiting broadside from Massachusetts Governor Francis Bernard, dated March 4, 1762. It is headed A Proclamation, and in it, Bernard calls for 2,000 new recruits to serve under Sir Jeffrey Amherst. It states that volunteers will only serve in the northern district of North America (the British were transferring some soldiers to the Caribbean at this point), and they would only have to serve until the end of October, less if peace was achieved sooner. They were to receive a bounty of 7 pounds and a blanket, $6 per month, and necessary supplies. The timing proved sufficient. In the last battle of the war on North American soil, the British defeated the French at the Battle of Signal Hill on September 15, 1762, recapturing the fort and forcing the French to leave. $7,500.

By November, the sides were ready for peace, which would be officially signed in February of 1763 in the Treaty of Paris of 1763. Item 116 is the Preliminary Articles of Peace... Signed at Fontainebleau, the 3rd Day of November, 1762. In it, the French, who had controlled most of Canada and the large territory of Louisiana west of the Mississippi River, gave it all up. The Spanish, who controlled Florida, exchanged it for Louisiana. The British got Florida and all of Canada. All the French received was the return of Martinique, Guadeloupe, and a few smaller islands in the Caribbean. On the other hand, despite their great victory, the perceived need by the British to raise taxes on the American colonies to pay for this war and future defenses, would lead to the American Revolution, where the British would lose their North American possessions south of Canada. $8,500.

This is what Reese calls "the most important map of North America in the Colonial period." It is undoubtedly the largest, too. Item 84 is A Map of the British Empire in America with the French and Spanish Settlements adjacent thereto, by Henry Popple. It is dated 1733, but circa 1735. This copy is particularly interesting and rare as it has been colored by a contemporary hand. The map consists of 15 double-page sections and five single-page ones. If the pages are put together, it creates a rectangular map over eight feet square. The map proceeds from Hudson Bay in the north and the Atlantic to the east, through the Great Lakes, down the Mississippi, and to the northern edge of South America to the south. To the west, it goes west of the Mississippi, far enough to capture most of today's Texas. The hand-coloring is particularly helpful as it assists in delineating territory controlled by the various colonial empires. Insets provide depictions of various sites, including New York City, Niagara Falls, Boston, Quebec, Mexico City, and other locations. $165,000.

Next is an important rarity for Tennessee and for an understanding of the Cherokee when they controlled much of the land. Through most of the pre-Revolution 18th century, the Cherokee were aligned with the British. Henry Timberlake was a British officer who agreed to accompany the Cherokee after a peace agreement between the Cherokee and British forces in eastern Tennessee. It resulted in a journey that brought him in contact with numerous Cherokee settlements in Tennessee and Georgia. Next, Timberlake, at their request, brought several of their leaders to England. They were all well-received, but a second journey to England two years later in 1765 did not go so well. The Indians were seeking assistance from the King in enforcing treaty obligations to keep European settlers east of the Alleghenies. Timberlake died in England on that second visit, but at first managed to finish his detailed account of Cherokee society and history. Item 114 is that book, The Memoirs of Lieut. Henry Timberlake, (Who Accompanied the Three Cherokee Indians to England in the Year 1762), published in 1765. Item 114. $35,000. If you can read French, you can get this book much less expensively through the 1797 French translation, Voyages du Lieutenant Henri Timberlake... Item 115. $2,000.