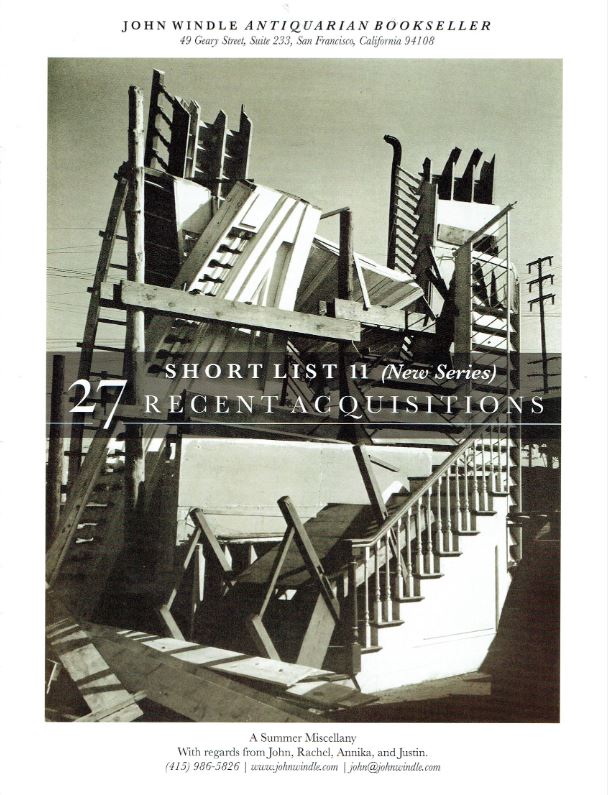 A Summer Miscellany of New Acquisitions.

John Windle Antiquarian Bookseller has issued A Summer Miscellany - 27 Recent Acquisitions. It is always good to find something new. A miscellany this is, a healthy variety considering the limited number of 27 new items. Here are a few of them.

We begin with one of the greatest of American photobooks. It is aptly titled The Americans, and it is something of a documentary of 1950s America as seen through the lens of Swiss-born photographer Robert Frank. Frank received a Guggenheim fellowship in 1955 and spent much of the next two years traveling around America. He snapped pictures like mad, but had to be quite selective for the book. It contains just 83 of the 28,000 black and white photographs he took. It is a realistic look at America of the time, candid photos taken of ordinary Americans, rich, poor, and in-between. It was not what many Americans wanted to see, realism instead of grandeur. Frank first published his photographs in France in 1958 as he had trouble finding an American publisher. When he did, the book was not particularly well-received, it taking many years for Frank's work to be appreciated. Fortunately for Frank, one person who saw the pictures did understand them, and that was logical because he was a writer also known for his road trip. Jack Kerouac agreed to write an introduction, and that at least provided Frank's work with some serious recognition. Perhaps the most notable of all the photographs is the one Frank took while watching a parade in New Orleans. He pulled out his camera as a trolley drove by. His image captures people in the open windows (those were the days before air conditioned travel). The white passengers are in the front, the black ones in the back. It depicted 1950s segregation without a word. It was only a few weeks after this photograph was taken that Rosa Parks refused to give up her seat in a Montgomery bus to a white person. Item 11 is the first American edition of The Americans, published in 1959. Priced at $4,500.

One good photo collection deserves another. However, this is not a printed book, but a personal photo album. It is also a mystery. It is not a typical family photo album. Circa 1875, it contains 50 leaves each with a portrait photograph on both sides. It is in an expensive cover, brown morocco, gilt and floral cover design, ivory bosses, brass clasps, and fore-edge paintings on each of the three edges. What we don't know is whose album it was. The only clues are a small inserted card inscribed "John B. Dillon Christmas 1878," and a leaf inscribed "From Mount Vernon Va"). I thought I found the answer in the obituary record of a John B. Dillon, described as a wealthy farmer and property owner, who was born in 1878 and buried in the Mount Vernon cemetery. The only problem is that it turned out to be the cemetery in Mount Vernon Arkansas, not Virginia. Someone else will have to unravel this mystery. Item 21. $1,250.

Here is one of the enduring American novels, as familiar today as it was when published in 1936. This is one of those rare cases where both the book and the movie are equally revered classics. The book is Gone With The Wind, by Margaret Mitchell, and it quickly went through enumerable printings, such was its instant popularity. Item 20 is a first edition, first printing, in the original dust jacket. $1,250.

Next we have a leaf book, one Windle describes as "one of the most sought-after books from the Club." The "Club" was The Book Club of California, and the printing was performed at the fine press of Edwin and Robert Grabhorn. The title is An Original Leaf from the Polycronicon printed by William Caxton at Westminster in the Year 1482. The rest of the book was published in 1938. The creator, and writer of the text about the life and works of Caxton, historical information about 15th century England, and about the Polycronicon, was Benjamin P. Kurtz. It was published in a limited edition of 297 copies with the original leaf tipped in. Item 16. $1,375.

Now we have a pair of planispheres. If you have forgotten that term, they are those round, rotating charts of the nighttime sky. You spin the wheel to the appropriate month, day and hour, and it shows you the position of the stars, in particular, the constellations. The problem is that you have to adjust your view when looking down at one. You have to hold it up and crane your neck to see the sky as it will look outside. Item 2 is Hammett's Planisphere, for latitude 40 degrees north, which evidently works for Boston and Newark. It was published circa 1900-1915. Item 3 is Whittaker's Planisphere, also for 40 degrees north, circa 1900. They are priced at $250 each.