A Variety of Historic Material from L & T Respess Books 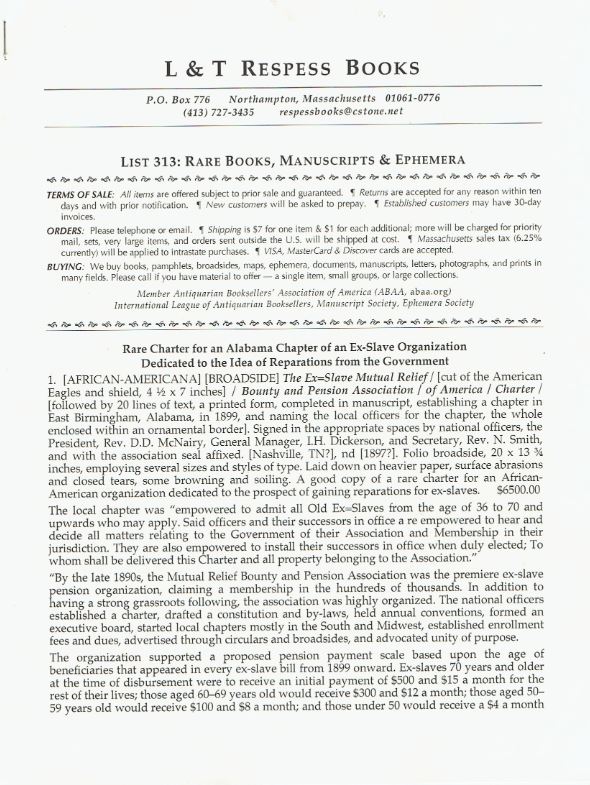 L & T Respess Books has published their List 313: Rare Books, Manuscripts & Ephemera. This is one of those catalogues where I am stumped to provide a description that sums up what is to be found. The material here is of a historic nature, significant rather than trivial, uncommon if not unique, mostly American but not entirely, and mostly old, 18th or 19th century. What I have not listed here, because I can't pinpoint it, is the subject matter. We will have to settle for a few examples with the caveat subjects covered go way beyond those of a few samples. And, one more thing - Respess has provided very thorough descriptions of these items.

Here is something that might seem surprising - a letter from a slave to his master. The slave's name was Jackson, his master had a full name, John Howard Furman, a South Carolina physician. It was written during the Civil War, dated October 24, 1864. Slaves not being taught how to write, it was written for him by his military supervisor. As the war dragged on, and the South became more desperate for manpower, the Confederate government began conscripting slaves. They weren't armed, for obvious reasons. Instead, like Jackson, they were put to work building military fortifications. Jackson writes that Furman's slaves are more or less well and that they have been told they will be sent home next week. In an earlier letter, Jackson requested Furman find a way to get them sent home, so he must have been pleased, preferring plantation life to being slaves of the Confederate Army. He requests Furman remember him to his wife. Item 3. Priced at $6,500.

If Jackson was still a slave at the time of this correspondence, he soon would be no more. Item 34 has the caption title War Headquarters Military Division, Winchester, April 11. 1865. This is a printing of the correspondence that took place between Generals Grant and Lee from April 7-9, leading to Lee's surrender on April 9, just two days before this printing. Sherman's troops had marched through South Carolina in February liberating its slaves, so most likely Jackson was already free by this date. In his correspondence, Grant informs Lee of the "hopelessness of further resistance." Lee saw the writing on the wall, and when Grant offered to let Lee's men return home, he recognized the generosity of the offer considering his situation and accepted it. This copy is endorsed by "Capt. Sam'l Cowdrey," of the 162nd New York Volunteers of the Army of the Shenandoah. $2,000.

It is amazing how quickly aviation "took off" after the Wright Bros. first, very short flight in 1903. By 1909, it was so prevalent that we had this catalogue being printed, The Aeroplane Annual, the First Complete Aviation Catalogue. With over 100 Plans and Illustrations. It was published by The Aeroplane Supply Company in London. Respess notes that "the company advertises various bi-planes and mono-planes, light aero-engines, parts & accessories, dirigible balloons, hangers & tents, working models & parts, etc. for sale." They provided illustrations, plans and sketches for various airplanes, including the "Wright Bi-Plane." Item 11. $1,500.

Next up is a biography of a participant in Lewis and Clarks's expedition to the American Northwest in 1804, undoubtedly the most important of all internal American explorations. He achieved both firsts and lasts among those explorers. Item 50 is The Life and Times of Patrick Gass, Now Sole Survivor of the Overland Expedition to the Pacific, under Lewis and Clark, in 1804-5-6, by J. G. Jacob, published in 1859. Gass, who had served briefly in the army, was brought onto the expedition as a private because of his carpentry skills. It was an important skill for building winter quarters, canoes and wagons for travel. When one of the higher ranked participants died, Gass was elevated to Sergeant. Gass is best remembered for his account of the expedition, published in 1807. It was the first account of it by a participant, preceding the official account by seven years. Gass would serve again in the military during the War of 1812. After this, his longevity would become more noticeable. In 1831, at age 60, he married a woman 40 years younger and had seven children. He outlived her by almost 25 years. At the time this book was published, Gass was already 88 years old and long since the last living Lewis and Clark survivor. At the age of 91, Gass attempted to reenlist in the U. S. Army during the Civil War but was turned down. He died in 1870, just short of his 99th birthday. Item 50. $1,250.

Item four consists of four pages of handwritten notes by President Andrew Johnson, an early draft of what would become his final State of the Union address, delivered in 1868. Johnson became President only a few weeks into Abraham Lincoln's second term when the latter was assassinated and is best known as the President who was impeached, and survived being removed from office by just a single vote in the Senate. In his address, Johnson offers several proposals, some fairly insightful. He calls for an end to the electoral college, replacing it with the direct election of the President and Vice-President. They would be limited to a single term in office. Senators would also be directly elected by the people, not by legislators. Johnson called for the naming of a third in line in case of the death or removal of both the President and Vice-President. That was understandable since he was an elevated Vice-President almost removed from office. Leaving that aside, Lincoln had died a few weeks into his term, as had William Henry Harrison a few decades earlier, leaving almost an entire term in office to complete with no presidential successor. Johnson also calls for repaying the national debt in 16 years and taxing interest on government bonds. However, the major issue he addressed was his battle with Congress over Reconstruction. Johnson believed that with the war over, the South could quickly be reintegrated into the Union if essentially left alone. Congress was not so forgiving, especially since it realized the freed black slaves would be returned to some form of servitude with few rights, the next "best" thing to slavery. Johnson had been selected to run for Vice-President on the Republican ticket because he was a strongly pro-Union man from a border state. Those sentiments had more to do with his contempt for southern plantation owners than concern for the welfare of slaves, so he was willing to sacrifice their interests to the cause of quick reunification of the states. Item 73. $12,500.