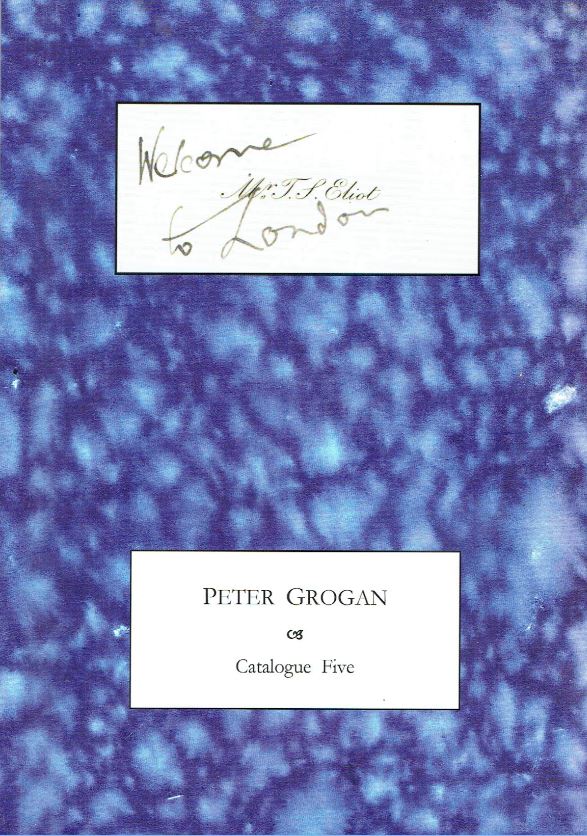 Peter Grogan of London has issued his Catalogue Five. It is not otherwise described so we will have to wing it with the description. We are not 100% correct with all of these attributes, but we are close. The material is from the twentieth century, it is in English, the writers are mostly English or Irish, and the books are literary fiction, or if the item isn't a book, it represents a writer in that field. Oh, throw in poetry with the literary fiction. That comes close. Now, for a few specifics.

The world knew her by the unfeminine moniker of "George Eliot," but the lady writer's name was Mary Anne Evans. Item 26 is a copy of the Book of Psalms with an inscription by the then 18-year-old Mary Anne to her older half-sister Fanny - "Mrs. Houghton / With the love of / her sister / Mary Anne - / May 1838." There are two ironies in this gift and inscription. First, Ms. Evans, having received and followed her proper religious education, began questioning those beliefs. Four years later, she no longer had any interest in the psalms or much else religious, and told her father she would no longer attend church. She only relented when he threatened to throw her out. The other irony is that she ended up estranged from Fanny. The only reason she gave was that she believed a source who told her that Fanny once spoke disparagingly of her. Priced at £7,500 (British pounds, or approximately $9,942 in U.S. currency).

Next we have a letter from the twentieth century philosopher and philanderer A. J. Ayer. Ayer became a celebrity in philosophical circles while still in his 20s. Language, Truth, and Logic, published in 1936 when he was 26, sealed his reputation and provided the status that opened doors to another sort of passion. He married four times, but only to three separate women, along the way. As for his philosophy, he was the voice of logical positivism, the belief that if statements cannot be subject to empirical verification, they are not just wrong, they are meaningless. This letter comes from the other end of his life. It is dated May 5, 1989. The 78-year-old Ayer died on June 27. Evidently he wasn't planning on it, as the letter offers a contribution to James L. Harmon's Take My Advice, a compendium of advice from knowledgeable older folks to the next generation. Ayer's advice was either not taken or not completed because it wasn't included. In his letter, Ayer adopts "Bernard" Russell's advice "That it is undesirable to believe a proposition when there is no ground whatever for supposing it true." The quote continues, "That this would tend to diminish the incomes of clairvoyants, bookmakers, bishops and others who live on irrational hopes." The letter is typed and signed by Ayer. Item 2. £375 (US $495).

Next we have one of a selection of works inscribed by T. S. Eliot to his close friend Mary Hutchinson. There was plenty of philandering here too, though not apparently from Mr. Eliot. Mary Hutchinson, wife of barrister St. John Hutchinson, and a member of the Bloomsbury Group, was the one with the Ayeresque reputation. Those affairs included critic Clive Bell, Aldous Huxley and his wife Maria (a threesome) Vita Sackville-West, possibly Virginia Woolf. They were all good friends, and so was Eliot, perhaps the closest, but not in the same manner. Eliot was not Ayer. Item 24 is one of Eliot's later works, The Elder Statesman, published in 1959. They had been close friends for some 40 years then, and Eliot had long since moved on from his struggling first marriage to a happy second. He has inscribed this book "For Mary Hutchinson with love from Tom (the author)." Grogan notes that he has only twice before seen Eliot use the name "Tom" and the word "love" in an inscription and both times it was to one of his two mothers-in-law, "which," he says, "is mildly alarming." £2,500 (US $3,301).

Speaking of Ms. Sackville-West, there was one woman who admired her even more than Mary Hutchinson - her mother. Vita certainly made Mum proud. Item 52 is Twelve Days: An account of a journey across the Bakhtiari Mountains in Southwest Persia, by Vita Sackville-West, published in 1928. It comes with an inscription to family friends as follows: "Another beautifully written Book by V. Sackville West for Mr. & Mrs. Higgs-Walker and given by the Dowager Lady Sackville 20 Nov. 1928." £275 (US $363).

Here is a book that was never published. It is the unpublished first American edition of Rupert Brooke's 1914 and Other Poems. Brooke was a young poet with a rising reputation when he went off to war in 1915. Like many others, he was one of its casualties, succumbing to disease, rather than warfare, in 1915. He was 27-years-old. Brooke was also part of the Bloomsbury Group and the numerous emotional relationships with some of those mentioned herein earlier, or members of their families or friends, is all too complicated to sort out here. Sidgewick & Jackson was Brooke's London publisher and they put out a first edition of 1,000 copies in England. They then asked Doubleday in New York to print up some copies to secure a copyright. However, Sidgewick was not able to reach a publishing agreement with Doubleday so those rights went to another. However, Doubleday printed up 87 copies, some of which were bound, others not, that were never published, but did end up in the marketplace. This copy is unbound. Item 6. £1,950 (US $2,574).