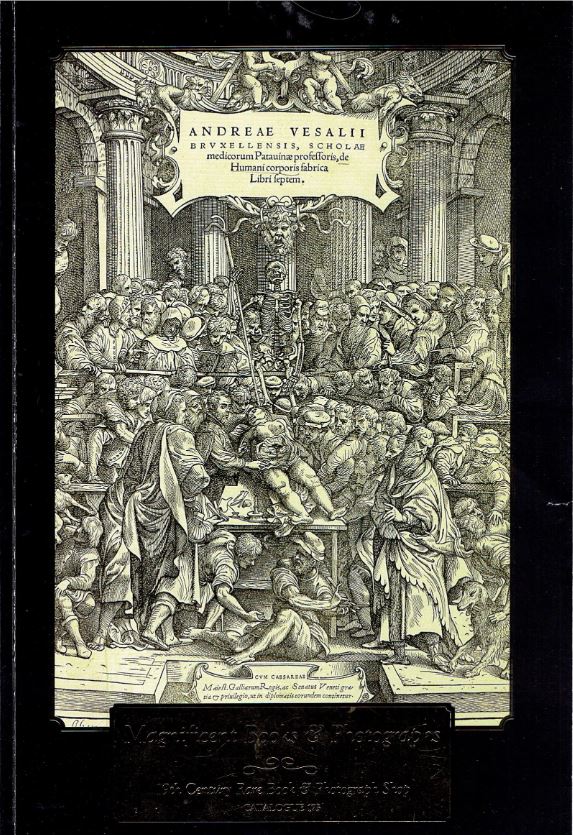 The 19th Century Rare Book & Photograph Shop has released a catalogue of Magnificent Books & Photographs. That is no exaggeration. Any catalogue that features Washington, Lincoln, Shakespeare, and 1,000 criminals can only be described as "magnificent." The criminals wouldn't stand a chance against those three, especially since they also have Daniel Boone on their side. This is material at the highest level for the most advanced of collections. If you collect at this level, you will appreciate the opportunity. Here are some of these magnificent items.

We will start at the top, at least for English literature. We are probably past the point where we need to describe Shakespeare as "arguably" the greatest writer in the English language and just award him the mantle. For those who collect the greatest, this is as good as it gets. Many of Shakespeare's plays were not published during his lifetime and would have been lost had not a few of his friends gathered them up after he died and had them published. They were first published in 1623 with the official title Mr. William Shakespeares Comedies, Histories, and Tragedies. That is commonly known as the First Folio and is virtually unobtainable today. Scarce, but still occasionally to be found is "The Second Impression," or the Second Folio. While that is dated 1632, not all copies were actually published then, there being several issues of the Second Folio, some coming out several years later. Offered is the first issue, first state, of the Second Folio. Along with Shakespeare's plays, the Second Folio contains an epitaph to the author by John Milton. It was the first appearance of Milton's writing in print. Priced at $190,000.

Many people think of this next writer as the greatest scientist, though here we will still have to append the term "arguably." Einstein and Darwin have their supporters as well. This work was certainly the most important advancement in science at its time, the Philosophiae Naturalis Principia Mathematica of Isaac Newton. This is the groundbreaking edition, the first edition, published on July 5, 1686. This contains Newton's laws of motion, gravitation, and his corpuscular theory of light. In it, Newton applies mathematics to define certainties in the field of physics, that is, its laws operate with the same certainty as do mathematical formulas. Particularly important is Newton's theory of gravity. He realized that the force that keeps the planets and other heavenly bodies in perfect motion, as observed by Copernicus and later Galileo, is the same gravitational force that operates on Earth. While Newton could never figure out what made that force work (he had to leave something for Einstein), he could predict with certainty how it would work everywhere. $850,000.

Next we have The President's Speech to Both Houses of Congress, appearing in The Massachusetts Magazine in 1789. This is George Washington's first inaugural address. In it, Washington speaks of the major issues of the day for the new republic, including the Revolution, Constitution, need for a Bill of Rights, balance of power, federalism, and the dangers of factionalism. Most importantly, he focuses on the importance of private morality on national policy. The President states, "there is no truth more thoroughly established, than that there exists in the economy and course of nature, an indissoluble union between virtue and happiness, between duty and advantage, between the genuine maxims of an honest and magnanimous policy, and the solid rewards of public prosperity and felicity." George, where are you when we need you? This isn't just any copy of Washington's first inaugural, but his personal copy. It is signed by the new President and contains his bookplate. After Washington died, it was received by his nephew, Bushrod Washington. It next appeared in the collection of Supreme Court Chief Justice John Marshall. Marshall worked with Bushrod in preparing his definitive biography of Washington and it is likely the latter gave it to Marshall at that time. It then was passed to many generations of Marshall descendants. $450,000.

Washington is also one of those "arguably" greatests. His main competitor for greatest President is Abraham Lincoln. There isn't much to be said about Lincoln you don't already know. If you are an admirer, here is something you will undoubtedly wish to own. It is a large, full-length photograph of the great man. The photograph is 18 1/2" x 15", in a gold-ruled 22" x 18" mount. In it, Lincoln is seated in a chair, his full length, all 6 feet 4, seen. Taken by Alexander Gardner, who started as a staff photographer for Matthew Brady, this is truly a magnificent photograph. It was taken on November 8, 1863, eleven days before Lincoln delivered his Gettysburg Address. $95,000.

Now that we have covered a bunch of the greatest, here are those 1,000 not-so greats. Actually, it is even a little more. This is a collection of carte de viste photographs of criminals, counterfeiters in particular, from the 1870s and 1880s. These are part of an archive once belonging to Secret Service Agent William Kennoch. Kennoch knew of crime, starting out as a cigar smuggler, but soon joined the other side as an expert on counterfeiting. 19th Century notes that at the time, one-third of the currency in circulation consisted of counterfeits. While counterfeits was their specialty, the Secret Service investigated numerous types of crime, including gambling, robbery, and murder. Kennoch was one of the best at his trade, but his career was short, dying at the age of 46. While most of the criminals displayed here are men, there are also several women. Many of the photographs are annotated with information such as name, aliases, crimes committed, arrest and conviction dates. While the photographs are the most visible part of this archive, it contains much more from Kennoch's career. Among the other items are 125 letters Kennoch wrote to his wife, Dora, pictures of Kennoch and his wife, information on the burglar alarms he patented and sold, Kennoch's personal travel diaries, an 1871 $5,000 reward broadside for escaped counterfeiter Thomas Ballard (that was a ton of money in the day), and many more artifacts from his career. $150,000.